Arkaim (Russian: Аркаим) is an archaeological site situated in the Southern Urals steppe, 8.2 kilometres (5.1 mi) north-to-northwest of Amurskiy, and 2.3 km (1.4 mi) south-to-southeast of Alexandronvskiy, two villages in the Chelyabinsk Oblast, Russia, just to the north from the Kazakhstan border. 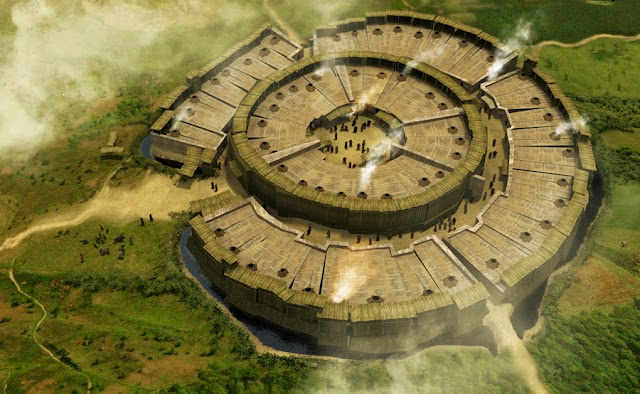 Arkaim (Russian: Аркаим) is an archaeological site situated in the Southern Urals....The site is generally dated to the 17th century BC. Earlier dates, up to the 20th century BC, have been proposed. It was a settlement of the Sintashta-Petrovka culture.... Arkaim is similar in form but much better preserved than neighbouring Sintashta, where the earliest chariot was unearthed. The site was protected by two circular walls. There was a central square, surrounded by two circles of dwellings separated by a street.....There are four entrances into the settlement through the outer and inner wall with the main entrance to the west.....Zdanovich estimates that approximately 1500 to 2500 people could have lived in the settlement......The 17th century date suggests that the settlement was about co-eval to, or just post-dating, the Indo-Aryan migration into South Asia and Mesopotamia (the Gandhara grave culture appearing in the Northern Pakistan from ca. 1600 BC, the Indo-European Mitanni rulers reached Anatolia before 1500 BC, both roughly 3,000 kilometres (1,900 mi) removed from the Sintashta-Petrovka area)....early investigators described Arkaim as "Swastika City", "Mandala City", and "the ancient capital of early Aryan civilization, as described in the Avesta and Vedas". The swastika description refers to the floor plan of the site, which may appear similar to the ancient swastika symbol....Newly found artifacts make the site itself much older; scientists agree on it being at least as old as Troy and the Egyptian pyramids; it dates back to the 4th millennium BC. It is said to be older then Stonehenge (3300 BC)....http://en.wikipedia.org/wiki/Arkaim 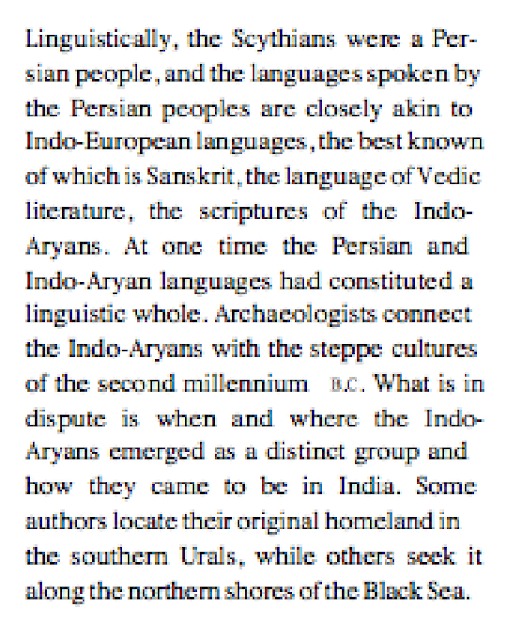 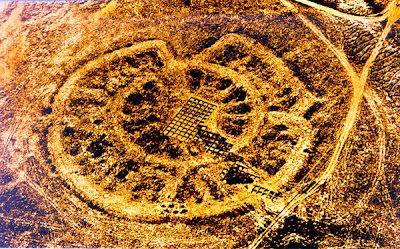 "Ar-ka means sky, and Im means earth, says Alex Sparkey, a Russian writer. He explains that this means Arkaim is a place where the Sky touches the Earth. Here the material and the spiritual are inseparable."...Alex Sparkey, The Ancient Land of Arkaim, from Spirit of Ma’at: Russia: Land of Living Mysticism, Vol. 3, No. 9, 3.

"Built on the same circular principle as Troy, as described in Homer’s Iliad, but at least six hundred years older, Arkaim finds its prototype in Plato’s Atlantis with its three concentric circles of canals....the swastika, thought to be the exclusively Aryan symbol of sun-worship misappropriated by the Nazis,and found depicted on many of the clay pots unearthed in Arkaim, is an older religious and metaphysical symbol than that attached to the Aryan Sun God, its roots lying in totemic shamanism...... René Guénon, the eminent French esotericist, points out that the swastika, symbolising eternal motion around a motionless centre, is a polar rather than a solar symbol, and as such was a symbol central to the Pole star cult, originally dedicated to a planetary deity connected to Ursa Major, the Great Bear. This centre, Guénon stresses, “constitutes the fixed point known symbolically to all traditions as the ‘pole’ or axis around which the world rotates…” The swastika is therefore known world-wide as the ‘sign of the pole.....René Guénon, The Lord of the World, Octagon Press, U.K., 1983, 9. 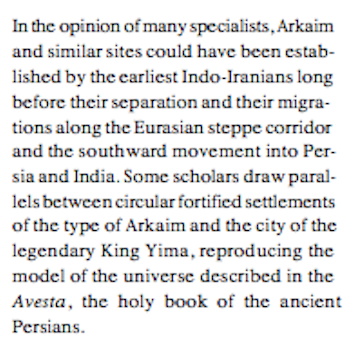