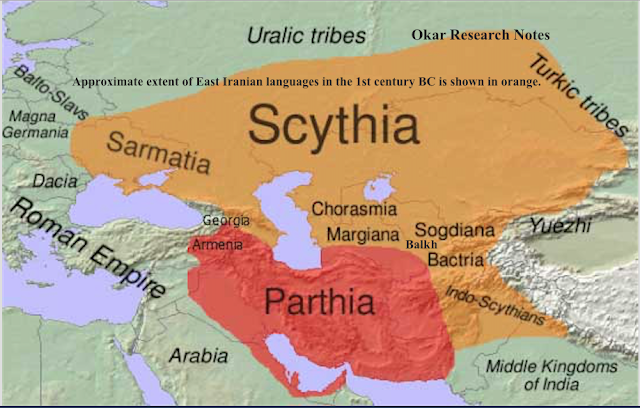 The Chomarians....."Maps of Ptolemy, the famous geographer, and survey but for a moment the provinces of Higher Asia, I mean those between Media, Bactriana and the Caspian Sea, there we shall easily find the Chomarians or Comarians...Eustathius of Antioch, author of the Commentary upon the Hexameron, relates that Gamer (the Greek Septuagint's spelling for Gomer) was the founder of the Gamarians, "whom we now call Galatians or Gauls." .....Chronicle of Alexandria, said that it was Gomer "from whom the Celtae had their origin."....Comer's people settled in Bactnana and Margiana, lands to the southeast of the Caspian Sea. Ptolemy, he notes, divided the Gomarians into two clans. Those called Chomarians he placed in Bactnana, "pretty near the Oxus." Some old maps of Bactriana that Pezron looked at confirmed this, for on them he found a city called Chomara, which he took to be "the capital of these people." As for their cousins, called Comarians, Ptolemy located them "towards the most eastern boundaries of Sogdiana, not far from the sources of the Jaxartes, and in the country of the Sacae." .....Mela, the earliest Latin geographer, also separated these kindred peoples, but on his map he settled the Comarians toward Sogdiana and Bactriana, while locating the Chomarians a little above the Caspian Sea and toward the Massagetae. ....beyond the Jaxartes, between the spring of that river and Mount Imaus (Koh-i-Kaf).".....When the provinces of Margiana, Hyrcania, and Bactriana became too small for their growing numbers, the Gomarian Sacae also began spilling over into other lands in Asia Minor and the Fertile Crescent. These expansions usually took the form of invasions. One of the first countries they overran, according to the ancient authors, was Armenia, a province of great beauty and fertility. .....though first called Titans, they were in reality just another tribe of greatly oversized Celtic warriors who, by their legendary exploits, made a great name for themselves in ancient times".....http://www.bibliotecapleyades.net

"The Saka (Old Persian Sakā; Sanskrit शाक Śāka; Greek Σάκαι; Latin Sacae; Chinese: 塞; pinyin: Sāi; Old Chinese *Sək) were a Scythian tribe or group of tribes of Iranian origin. They were nomadic warriors roaming the steppes of modern-day Kazakhstan.....Greek and Latin texts suggest that the term Scythians referred to a much more widespread grouping of Central Asian peoples.....Modern debate about the identity of the "Saka" is due partly to ambiguous usage of the word by ancient, non-Saka authorities. According to Herodotus, the Persians gave the name "Saka" to all Scythians. However, Pliny the Elder (Gaius Plinius Secundus, AD 23–79) claims that the Persians gave the name Sakai only to the Scythian tribes "nearest to them". The Scythians to the far north of Assyria were also called the Saka suni "Saka or Scythian sons" by the Persians.[citation needed] The Assyrians of the time of Esarhaddon record campaigning against a people they called in the Akkadian the Ashkuza or Ishhuza.....Another people, the Gimirrai, who were known to the ancient Greeks as the Cimmerians, were closely associated with the Sakas. In ancient Hebrew texts, the Ashkuz (Ashkenaz) are considered to be a direct offshoot from the Gimirri (Gomer)."....

"The Saka regarded by the Babylonians as synonymous with the Gimirrai; both names are used synonymously on the trilingual Behistun inscription, carved in 515 BC on the order of Darius the Great.(These people were reported to be mainly interested in settling in the kingdom of Urartu, later part of Armenia and Shacusen, in Uti Province derives its name from them.) The Behistun inscription mentions four divisions of Scythians,
the Sakā paradraya "Saka beyond the sea" of Sarmatia,
the Sakā tigraxaudā "Saka with pointy hats/caps",
the Sakā haumavargā "haoma-drinking Saka" (Amyrgians, the Saka tribe in closest proximity to Bactria and Sogdiana), the Sakā para Sugdam "Saka beyond Sugda (Sogdiana)" at the Jaxartes. 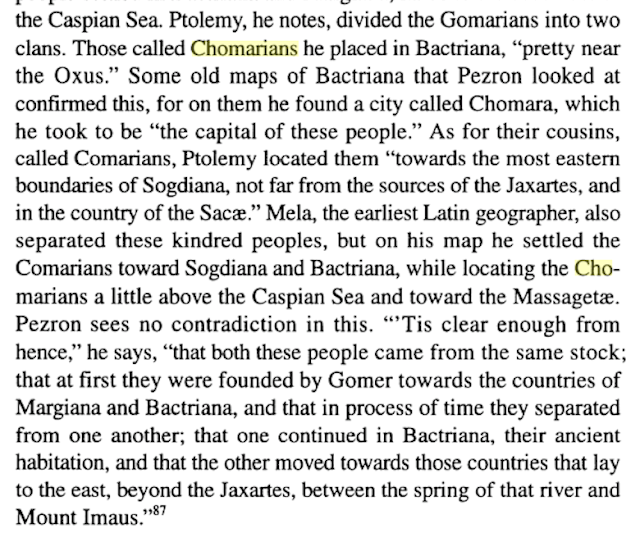 "Migrations of the 2nd and 1st century BC have left traces in Sogdiana and Bactria, but they cannot firmly be attributed to the Saka, similarly with the sites of Sirkap and Taxila in Ancient India. The rich graves at Tillya Tepe in Afghanistan are seen as part of a population affected by the Saka.....Indo-Scythians....Tadeusz Sulimirski notes that the Sacae also migrated to parts of Northern India..... Weer Rajendra Rishi, an Indian linguist has identified linguistic affinities between Indian and Central Asian languages, which further lends credence to the possibility of historical Sacae influence in Northern India......According to historian Michael Mitchiner the Abhiras or modern days Ahirs were a Saka people cited in the Gunda inscription of the Western Satrap Rudrasimha I (AD 181)."

"Seventeen centuries before Aryanism found a foothold in Europe, Ptolemy placed the Chomarians (Gomerites) between Media, Bactriana and the Caspian Sea, and his work was recreated in the 15th century. Stephen Quayle lists Josephus, St. Isidore, St. Jerome, Eustathius of Antioch and Joseph Goronidis in support of the claim that the Gomerites were none other than the Gauls who spread into Europe.96 The 17th century Breton philologist Paul-Yves Pezron even documented how and why the Gomerites divided, and where they went......By consulting the most famous ancient geographers, such as Ptolemy, Pliny, Pomponius Mela, and Dionysius of Alexandria, Pezron also learned that after the fall of the tower of Babel Comer’s people settled in Bactriana and Margiana, lands to the southeast of the Caspian Sea. Ptolemy, he notes, divided the Gomarians into two clans. Those called Chomarians he placed in Bactriana, “pretty near the Oxus.” Some old maps of Bactriana that Pezron looked at confirmed this, for on them he found a city called Chomara, which he took to be “the capital of these people.” As for their cousins, called Comarians, Ptolemy located them “towards the most eastern boundaries of Sogdiana, not far from the sources of the Jaxartes, and in the country of the Sacae.” Mela, the earliest Latin geographer, also separated these kindred peoples, but on his map he settled the Comarians toward Sogdiana and Bactriana, while locating the Chomarians a little above the Caspian Sea and toward the Massagetae. Pezron sees no contradiction in this. “Tis clear enough from hence,” he says, “that both these people came from the same stock; that at first they were founded by Gomer towards the countries of Margiana and Bactriana, and that in process of time they separated from one another; that one continued in Bactriana, their ancient habitation, and that the other moved towards those countries that lay to the east, beyond the Jaxartes, between the spring of that river and Mount Imaus.” ...Steve Quayle, “Middle East Giants” p. 7, http://www.stevequayle.com/index.php?s=331. 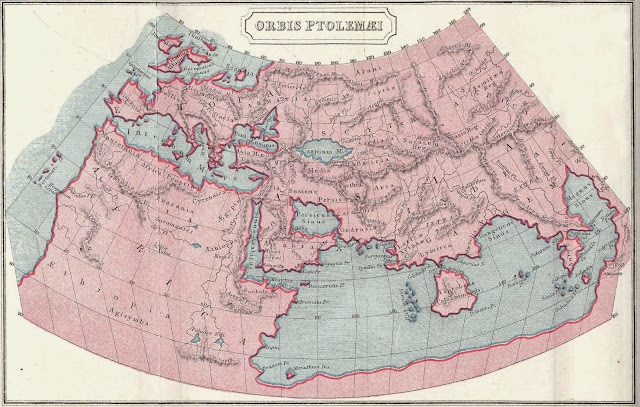 "1000-550 BC - Bactrian Kingdom.....Nothing is more evocative of the history of ancient Afghanistan as the name of Balkh as it is linked to the epic of the Aryan people. One thinks of the land of Hystaspa, Yama, and Zoroastre. What is certain is that by the third millennium B.C. the so called Bactrian civilization places itself between the septentrional cultures of Central Asia, Ouzbek, and Tadjik, and the ones from the Indus valley to the South and Iran to the West.....This country was traditionally said to have first been peopled by the descendants of Gomar, the grandson of Noah, and for some time, they were called Chomarians, and their metropolis Chomara, appellations derived, with very little corruption, from the name of that patriarch. Afterwards Bactria became the capital of the kingdom; and, according to Q. Curtius, both the kingdom and its capital were denominated from the river Bactrus, which fertilized the fields through which it rolled, and washed the walls of that famous and almost impregnable city. But the name of the river upon which Bactria was built, according to Pliny, was Zariaspa, and, according to Ptolemy, Dargidus......It will not, however, be impossible to reconcile the accounts of Curtius and Pliny, if what the latter affirms be allowed, that the ancient name of Bactria was Zariaspe, which is also affirmed by Strabo. In the same manner the river, upon which the city was built, may have also changed its name, or borne different names in different countries. Ptolemy's account, however, is inconsistent with both; for he places the city in the interior of the kingdom, while they assert, that it was situated at the foot of the Paropamisus, the southern boundary of the country. Bactria, in latter ages, was called Balk, a name which it bears at the present day."....http://www.globalsecurity.org/military/world/afghanistan/history-bactria.htm