Beyul are sacred environments...‘Beyuls’ or hidden valleys, are discovered when the planet is approaching destruction and the world becomes too corrupt for spiritual practice. Beyuls are inaccessible to all but realized beings or Siddhas. This land is said to be inhabited by Vidyadharas (rig-`dzin) or holders of esoteric knowledge. They exist on earth, but are not an ordinary country or nation which could be observed from an orbiting satellite, for they possess a special reality all their own. They are in this world, but not quite of it.

"Ölmo Lungring possesses a different ontological status than ordinary geographical regions and countries. In terms of our own age, it is a hidden land or “beyul” (sbas-yul), inaccessible to all but realized beings or Siddhas. This land is said to be inhabited by Vidyadharas (rig-`dzin) or holders of esoteric knowledge. It exists on earth, but it is not an ordinary country or nation which could be observed from an orbiting satellite or sighted from a high flying airplane, for it possesses a special reality all its own. It is in this world, but not quite of it. It is part of our physical geographical world because it is located in Tazig, yet it partly exists in another spiritual dimension, and although material, it is in a certain sense imperishable and indestructible. When, at the end of the kalpa, the world will be destroyed and consumed by fire, Ölmo Lungring will spontaneously rise up and ascend into the sky and there it will merge with its celestial archetype in the heavens which is called Sidpa Yesang (srid-pa ye-sangs). Ölmo Lungring is truly the imperishable sacred land."......http://bonchildren.tonkoblako-9.net/en/jewel2/03.tan

"The beyul are discovered when the planet is approaching destruction and the world becomes too corrupt for spiritual practice. They describe valleys reminiscent of paradise, which can only be reached with enormous hardship. Pilgrims who travel to these wild and distant places often recount extraordinary experiences....People who try to force their way in, may encounter failure and death. Beyul retreat time has concentrated benefits. The places originate from a faith which has traditional natural site respect. Life in beyul is sacred and protected......Earthly beyuls share significant characteristics with Shambhala."....http://en.wikipedia.org/wiki/Beyul 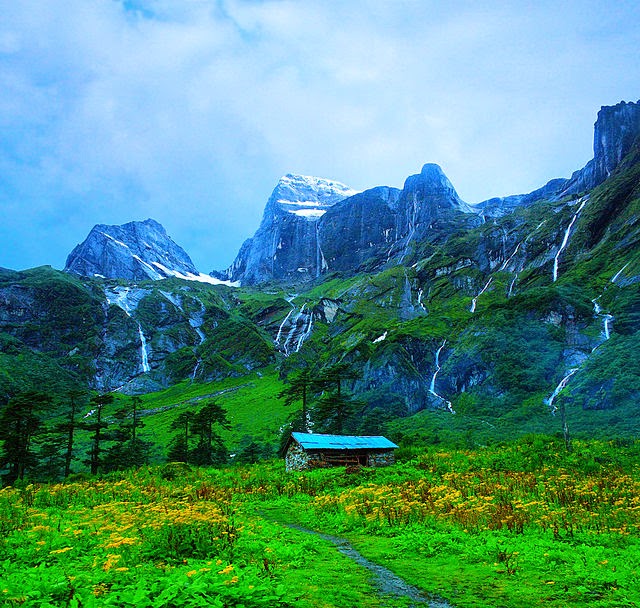 "Guru Padmasambhava forecasted beyul while in the presence of Tibetan King Trisong Detsen and others at Samye Monastery :– “in the future when there will be warfare, strife, and difficult circumstances in the world, good people and dharma practitioners should travel to ‘Beyuls’ or hidden valleys situated south of the Tibetan Himalayan range for refuge.”....http://en.wikipedia.org/wiki/Beyul

"Sacred environments are places to deeply enter the world, and to avoid escaping it. The qualities inherent in such places reveal the interconnectedness of all life and deepen awareness of the spirit and mind's hidden regions. Visiting beyul with good motivation and appropriate merit, the person can learn to see the world differently from the way it commonly appears, developing and enhancing the virtues of wisdom and compassion. Inside beyul, people should abandon their negative actions. The lands embody protector deities and lords of the land, which are associated with the geographic features such as mountain, trees, rocks and water sources. In custom, ritual offerings are made to these spirits to appease their wrathful nature and with the symbolic unity that people share with them. The attitude affords a sustainable approach toward land stewardship.".....http://en.wikipedia.org/wiki/Beyul

"The Beyul realm of Tagzig Olmo Lung Ring is fabled to be located to the west of Mount Kailash and shaped like an eight-petaled lotus and divided into four regions: inner, middle, outer and boundary area. The sky of this realm is likened to an eight-spoked wheel and the land itself is fragrant and coloured by beautiful flora and landscaping, chorten and snow-capped mountains.".....http://en.wikipedia.org/wiki/Tagzig_Olmo_Lung_Ring

"Barun Valley (बरुण उपत्यका) is a Himalayan valley situated at the base of Mt. Makalu in the Sankhuwasabha district Nepal. This valley provides stunning contrasts, where high waterfalls cascade into deep gorges, craggy rocks rise from lush green forests, and colorful flowers bloom beneath white snow peaks. This unique landscape shelters some of the last pristine mountain ecosystems on earth. Rare species of animals and plants flourish in diverse climates and habitats, relatively undisturbed by human kind.".....http://en.wikipedia.org/wiki/Barun_Valley

"In the ancient religious Buddhist books, seven Shangri-la ( Nghe-Beyul Khimpalung) situated in the Himalayan region are described as mystical and spectacularly beautiful evergreen places where no one gets old. It is told that, in case of great cataclysm, life will remain only in these areas of the world.".....http://en.wikipedia.org/wiki/Shangri-la

"Because of their remote and isolated location, and the respect with which they have been treated by the communities that reside in or near them, the beyul contain high levels of biodiversity in a setting of tremendous beauty. However, outside influences like globalization, nationalization, cultural assimilation and tourism have begun to erode the power of the traditional beyul concept in many places, while development encroaches on the physical landscape. If modern conservation and management efforts are to be successful, they must find ways to preserve and integrate longstanding traditional beliefs and practices."... http://www.sacredland.org/beyul/#sthash.blH4TwVH.dpuf

"Beyul are religious conceptions, but because of the reverence with which they are treated by local residents, hunting, fighting and disturbing the natural landscape are considered inappropriate behaviors and are avoided. As a result, beyul have become significant oases of biodiversity as well. They typically have plentiful water coming from the surrounding mountains, and their terrain is covered with forests, lakes, alpine meadows, and snow and ice fields. These valleys cover large areas and have vast elevation ranges. Their size and topographic variations provide a home for a diverse array of plants and animals; their isolation and inaccessibility generally means low levels of human disturbance......Within the beyul, particular natural features such as lakes, rocks and patches of forest are often regarded as especially sacred because they are home to supernatural beings. Some gathering of plant resources, such as medicinal plants, firewood and timber, is allowed, but collectors make sure they have not harvested more than is needed. The animals in beyul are protected by the Buddhist taboo against killing. The residents of the Kharta and Rongshar areas in Tibet, for example, challenged British explorers who wanted to hunt when they arrived in 1921. Endangered species that live in beyul include the snow leopard, musk deer, red panda and Himalayan black bear......The sacredness of the beyul also means that human conflicts are spiritually discouraged. In Beyul Dremoshung in the Indian state of Sikkim, two groups, the Lepchas and Bhutias, hold an annual festival that commemorates the signing of a peace treaty. The festival celebrates the deity of the beyul’s Mount Kangchendjunga, who is supposed to have witnessed the treaty signing.".....http://www.sacredland.org/beyul/