"The Xiongnu (Chinese: 匈奴; pinyin: Xiōngnú; Wade–Giles: Hsiung-nu; Middle Chinese Guangyun: [xi̯woŋ˥˩nu˩]) were ancient nomadic-based people that formed a state or confederation. Most of the information on the Xiongnu comes from Chinese sources. What little is known of their titles and names comes from Chinese transliterations of their language.The identity of the ethnic core of Xiongnu has been a subject of varied hypotheses, because only a few words, mainly titles and personal names, were preserved in the Chinese sources. Proposals by scholars include Mongolic, Turkic, Yeniseian, Tocharian, Iranian, and Uralic. They also possibly worshipped Tengriism. The name Xiongnu may be cognate to the name Huns, but the evidence for this is controversial......Chinese sources from the 3rd century BC report them as having created an empire under Modu Chanyu, the supreme leader after 209 BC. This empire stretched beyond the borders of modern-day Mongolia. After defeating the previously dominant Yuezhi in the 2nd century BC, Xiongnu became a dominant power on the steppes of central and eastern Asia. They were active in regions of what is now southern Siberia, Mongolia, western Manchuria, and the Chinese provinces of Inner Mongolia, Gansu and Xinjiang. Relations between early Chinese dynasties and the Xiongnu were complex, with repeated periods of military conflict and intrigue alternating with exchanges of tribute, trade, and marriage treaties.".....http://en.wikipedia.org/wiki/Xiongnu 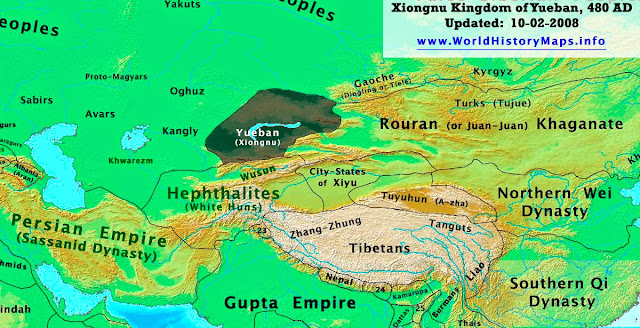 "The ruler of the Xiongnu was called the Chanyu. Under him were the "Wise Kings (Tuqi Kings) of the Left and Right." The Wise King of the Left was normally the heir presumptive.Next lower in the hierarchy came more officials in pairs of left and right: the guli (kuli, 'kings'), the army commanders, the great governors, the dunghu (tung-hu), the gudu (ku-tu). Beneath them came the commanders of detachments of one thousand, of one hundred, and of ten men. This nation of nomads, a people on the march, was organized like an army. ("Chanyu", in Chinese Chengli Gutu Shanyü, "Majesty Son of Heaven" might be a loanword from Turko-Mongol Tengri, The Heaven. "Wise", in Chinese 'tuqi' or 'tu-ch'i, is perhaps from Turkic 'doghri', straight, faithful.)"....http://en.wikipedia.org/wiki/Xiongnu

"Among scholars who proposed an Iranic origin for the Xiongnu are H.W. Bailey (1985) and János Harmatta (1999), who believe that the Xiongnu confederation consisted of 24 tribes, controlling a nomadic empire with a strong military organization, and that "their loyal tribes and kings (shan-yü) bore Iranian names and all the Hsiung-nu words noted by the Chinese can be explained from an Iranian language of the Saka type. . . . It is therefore clear that the majority of Hsiung-nu tribes spoke an Eastern Iranian language". Jankowski concurs......http://en.wikipedia.org/wiki/Xiongnu

"Well-preserved bodies in Xiongnu and pre-Xiongnu tombs in the Mongolian Republic and southern Siberia show both 'Mongoloid' and 'Caucasian' features but are predominantly Mongoloid with some admixture of European physical stock, nonetheless the Xiongnu shared many cultural traits with their Indo-European neighbors, such as horse racing, sword worship.....http://en.wikipedia.org/wiki/Xiongnu "It seems as if the legend of Shambhala was at least partially inspired by the Xiongnu Empire which stretched from Mongolia to Central Asia (indeed north of Tian Shan and the several "White Rivers (Sita)"). I wonder if Chandra Bhadra (a.k.a. Suchandra, Skt. "Auspicious Moon") was actually translation of a name or phonetic rendering of the title of the Xiongnu Emperor Shanyu Baghatur (Chanyu Batyr). Baghatur Tengri is Mongolian god of victory, while in Altaic mythology there is such celestial hero (Batyr) similar to Mithra called Mangdyshire whose name is clearly derived from that of Manjushri. In a Bon text cited by Kuznetsov the supreme deity Bumkhri Sangspo is identified with alternative name of Manjushrighosha - same as that of the first Kulika king - contemporary of Shanyu Mode (= Turk. Baghatur/Batyr). "...Posted by Ardavarz to Shamis-en-balkh and Historical Shambhala