"The struggle of Haoma against Keresani is an old Indo-European myth, Keresani being the same as the Vedic KWsanu, who wants to keep away Soma from the ......Keresani in this passage may primarily be identified with the Vedic Kri(,-anu, the guardian of the heavenly Soma, .......Krsanu = Keresani are divine beings connected with soma — haoma. ... of magical rites and the worship of inanimate objects still surviving in the Veda"....The Zend-Avesta: The Vendîdâd, translated by James Darmesteter

The identity of Mitra with Mithra .....is patent and undeniable, Iran seems to have known Dyaus, 1 and there are as clear identities in minor figures such as that of Apam Napat, and Apam Napat, Gandharva and Gandarewa, Kr^anu and Keresani, both of whom appear in connexion with the Soma.....http://archive.org/stream/religionandphilo030957mbp/religionandphilo030957mbp_djvu.txt

......it is recorded, ahura says, 'I maintain that sky there above, shining and seen afar and encompassing the earth all round. It looks like a palace that stands built of a heavenly substance firmly established with ends that lie afar, shining, in its body of ruby over the three worlds; it is like a garment inlaid with stars made of a heavenly substance that mazda puts on.' Yasht XIII. Like VaruNa, who is the lord of rhta, ahura is the lord of aSha. As VaruNa is closely allied with mitra, so is ahura with mithra, the sun-god. avesta knows verethragna who is vrhtrahan, the slayer of vrhtra. dyaus, apAmnapAt (apAm napAt), gandharva (Gandarewa), krhsAnu (KeresAni), vAyu (Vayu), yama, son of vivasvant (Yima, son of Vivanhvant) as well as yajna (Yasna), Hotrh (Zaotar), Atharva priest (Athravan). These point to the common religion of the undivided Indo-Aryans and Iranians. .....http://www.writespirit.net/indian-wisdom/upanishads/upanishadsradhakrishnan/relation/

The Indian priests ( 'Keresani' ) wish, that there may be no more of missionary work in their country by the Iranian Athravans.

"A further echo of the antl-Magian feelings may be heard In Yasna IX, 3: 'Haoma overthrew Keresani, who rose up to seize royalty, and he said, *" No longer shall henceforth the Athravans go through the lands and teach at their will/* * This Is a curious instance of how easily legendary history may turn myths to Its advantage. The struggle of Haoma against KeresSni is an old Indo-European myth, Keresani being the same as the Vedic Krt'sfixiu, who wants to keep away Soma from the hands of men. His name becomes in the Avesta the name of an anti-Magian king [it may be Darius, the usurper (?)]/ and ten centuries later it was turned into an appellation of the Christian Kaisars of Rflm (Kalasyfik*l*^Xi7a-ta[icds] ; ,Tarsfika)."......http://www.dli.gov.in/data/upload/0013/002/TXT/00000054.txt

".....there has been a great deal of speculation among scholars concerning the true identity of the mystery plant in the Rig Veda called Soma, the only plant known to have been deified in the history of human culture, (Furst, 1972:201). While the hymns about Soma have come down to us through time, the botanical identity of Soma remains a mystery. Theories abound as to Soma's forgotten identity, yet among Vedic and Hindu scholars Soma is believed to be a species of Ephedra. ....We know from the sacred texts called the Rig Veda, (Veda is a Sanskrit word meaning "to see") that Soma was an intoxicating plant worshiped as both a god and holy beverage by a people who called themselves Aryans. We are told that drinking Soma produces immortality, and that the gods drank Soma to make them immortal....the Aryans, who introduced their Vedic religion into the Indus Valley civilization around 1600 B.C., believed that sacrifices were necessary to keep the world in balance. This balance was maintained through the acts of ritual sacrifice and the offering of a hallucinogenic drink called Soma (Sanskrit), and Haoma (Avestan) among the ancient Persians of Iran.".... THE ORIGIN OF A MUSHROOM RELIGION IN THE NEW WORLD..... A New Road of Archaeological Inquiry......By Carl de Borhegyi 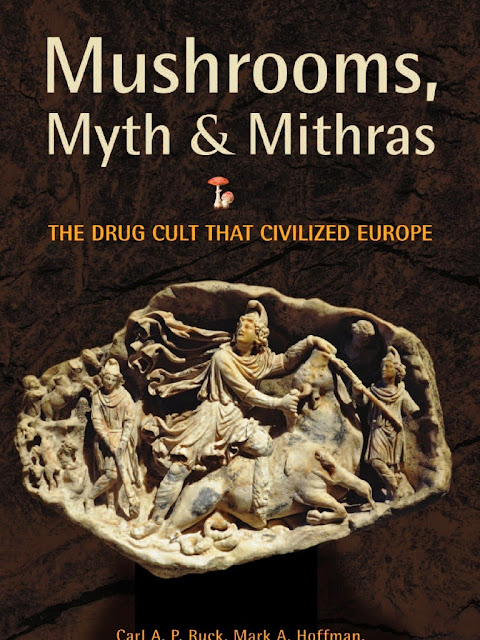 Email ThisBlogThis!Share to TwitterShare to FacebookShare to Pinterest
Labels: Kings, The Vedas