In Tibetan Buddhism Crazy wisdom or 'yeshe chölwa' (Tibetan: ཡེ་ཤེས་འཆོལ་བ, Wylie: ye shes 'chol ba, literally: "wisdom gone wild") refers to unconventional, outrageous, or unexpected behavior, being either a manifestation of buddha nature and spiritual teaching (enlightened activity, Wylie: phrin'las) on the part of the guru, or a method of spiritual investigation undertaken by the student. It is also held to be one of the manifestations of a siddha or a mahasiddha. Teachers such as the eighty four mahasiddhas, Marpa, Milarepa, the Nyönpa and Chögyam Trungpa have traditionally been associated with crazy wisdom."

"What is Crazy Wisdom?.....by Chögyam Trungpa.....I would like to continue from last night's talk. We have discussed the three levels of the teacher relationship in terms of the student's development. Tonight I would like to talk about whom we're relating to in the sadhana. We have a sense of relating with somewhat ideal, ethereal beings, who are known as Dorje Trolö or Karma Pakshi, people who have already existed, who have lived and died in the past. How can we relate those people to the present situation? And how is that different from worshipping Jesus Christ, for that matter? That is an interesting question. Dorje Trolö or Karma Pakshi represent the notion of the embodiment of the siddhas. Siddha is a Sanskrit word which refers to those who are able to overpower the phenomenal world in their own enlightened way. A siddha is a crazy wisdom person. Crazy wisdom in Tibetan is yeshe chölwa. Yeshe means "wisdom," and chölwa, literally, is "gone wild." The closest translation for chölwa that we could come up with is "crazy," which creates some further understanding. In this case "crazy" goes along with "wisdom"; the two words work together well. So it is craziness gone wise rather than wisdom gone crazy. So from that point of view, craziness is related with wisdom.".....http://www.shambhala.org/teachings/view.php?id=131

"Although the siddha's activity should not, therefore, be perceived as "crazy" on account of transgression of moral and social parameters, according to Maitripa uncontrolled emotivity as a result of inadequate training is authentic divine madness....
The thought-free yogin is like a child,
Like a bee in a flower garden tasting every bloom,
Like a lion roaring in the jungle,
And like the wind blowing where it listeth.
If his mind is trained in attention and discretion
His behavior is immaculate;
If there are no checks upon his mind's effusion
The yogin behaves like a divine madman...
The Eighty-four Mahasiddhas and the Path of Tantra by Keith Dolman

"Georg Feuerstein however, takes a perennialist approach in equating this originally Vajrayana term with the trickster-type behavior of teachers in other Dharmic Traditions such as Zen, Tantra and Sanatana Dharma. He claims that parallels to this may be found among other forms of spirituality as well, citing Sufism, Bonpo, Taoism, Russian Orthodoxy (Yurodivy) and shamanism as examples."

The Tantric Path of Indestructible Wakefulness (volume 3).....By Chogyam Trungpa

"...Before describing the yogas and the teaching of these spiritual adventurers and multi-facetted adepts called siddhas, it will be helpful to define several Sanskrit words that remain untranslated throughout the work, words that have no English equivalents. The first word is siddha itself. Literally a siddha is a practitioner of Tantra who is successful in attaining the goal of his meditation. This achievement is known as siddhi. Siddhi is two-fold: magical power (mundane), and the Buddha's enlightenment (ultimate). Thus siddha could be rendered "saint," "magus," "magician," "adept;" but these words are feeble, failing to evoke the originality of the siddhas' tantric life-style. For the uninitiated Indian the word siddha evokes magical power above all; if a yogin can walk through walls, fly in the sky, heal the sick, turn water into wine, or even levitate and read minds, he deserves the title siddha. If that same yogin has a crazy glint in his eye, smears himself with ashes, moves himself or others to tears with his song, calms street mongrels by his presence, tears a faithful woman from her family, wears a vajra - a symbol of immutability - in his yard-long hair-knot, eats from a skull-bowl, talks with the birds, sleeps with lepers, upbraids demagogues for moral laxity, or performs with conviction any act contrary to convention while demonstrating a "higher" reality, then he is doubly a siddha. Common people impressed by appearances have no conception of the siddha's esoteric aim - Mahamudra - and cannot know that a siddha may also be an inconspicuous peasant, an office worker, a king, a monk, a servant or a tramp."....The Eighty-four Mahasiddhas and the Path of Tantra by Keith Dolman 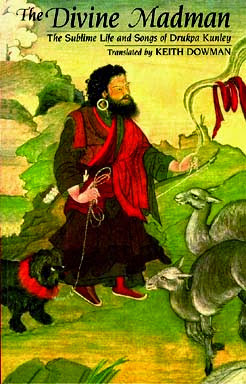 "If the siddha's action is concomitant with Mahamudra, what then of his craziness, his flaunting of social convention and his uninhibited emotivity? To a large extent those very prejudices, preconceptions and other limitations of his critic's blinkered vision which the siddha rejoices to see eradicated, determine the perception of him as crazy. For instance, when the critic interprets the siddha's act, or gesture, as a crazy irrelevancy, as the non-sequitur of a madman, it is probable that he is failing to intuit the level of response upon which the siddha is operating, and that his discursive analysis is precluding the soteriological effect in his own mind through which those open to the siddha's transmission of meaning by symbolical action or gesture benefit. Similarly, when a moralist of the Confucian type castigates a siddha for violating social conventions such as the rules of pure eating, or for immoral behavior such as sexual transgression, from the Buddha's point of view there is less virtue in the moralist's inflexible social and moral prescriptions than in the siddha's "sinful" attempts to induce awareness, with all the social and moral benefits that accrue, wherein enlightenment is the ultimate goal. Thus on the short-cut path of Tantra, disregard of social and moral discipline is the corollary of the compassionate skillful means employed by the adept to eradicate obstacles to liberation."....The Eighty-four Mahasiddhas and the Path of Tantra by Keith Dolman 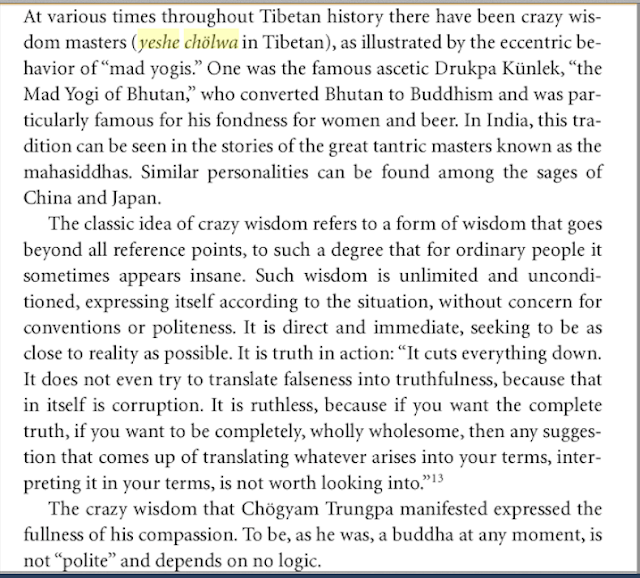