Ceremonial dance is a major category or classification of dance forms or dance styles, where the purpose is ceremonial or ritualistic.

" Central Asian dance could be divided into the following basic categories: Uzbek, Tajik, Sin Jiang or Uyghur, Turkoman and Kirghiz. Uzbek is divided into: Fergana, Bokhara and Khorazm. The cities of Kashgar and Yarkand in Sin Jiang or Chinese Turkestan represent the farthest east sector of the former Persian empire. These cities on the opposite side of the Fergana valley from Samarkand and Bokhara. Thus, the dance forms which have been preserved among the Tajik and Uyghur ethnic minorities of Sin Jiang likely reflect aspects of ancient Persian forms. The proximity of this area to Kashmir also intimates influence from India as well.".....http://www.easternartists.com

"The cham dance (Tibetan: འཆམ་, Wylie: cham) also spelled tscham or chaam, is a lively masked and costumed dance associated with some sects of Buddhism, and is part of Buddhist festivals. The dance is accompanied by music played by monks using traditional Tibetan instruments. The dances often offer moral instruction relating to compassion for sentient beings and are held to bring merit to all who perceive them. Cham dances are considered a form of meditation, and an offering to the gods....In Bhutan, the dances are performed during an annual religious festival known as Tsechu, which is held in each district. Only monks or male members of the Royal Academy of Performing Arts are allowed to perform a cham dance in Bhutan."....http://en.wikipedia.org/wiki/Cham_dance.

Tibetan Deer Dance....."Both the Buddhist & Bon deer dances held the intent of driving away evil forces to establish a good start to the new year. Tucci explains that with the increase of the influence of Buddhism in Tibet, sacrifices were made into metaphor, with animal skulls or effigies made of tsampa and butter (torma) replacing live animals. Nebesky-Wojkowitz similarly determines the deer's pairing with its master Yama in cham to be a remainder of pre-Buddhist sacrificial rites since he failed to find references in Yama's spiritual practices to a deer attendant. In his estimation, the stag and the yak as Yama's messengers are "undoubtedly figures of the old Tibetan folk religion," (Tucci, Guiseppe. The Religions of Tibet. Trans. Geoffrey Samuel. New York : Kegan Paul International, 2000.) 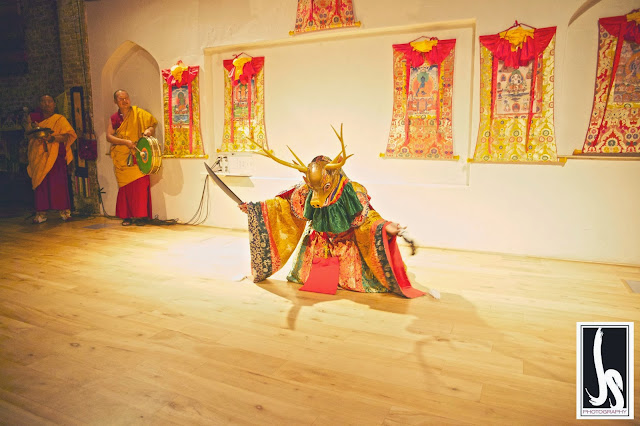 "Uzbek dance types, the Fergana style, for instance, contains a vast vocabulary of delicate and fluid arm movements, smoothly flowing from one position to the next. The poetic movements represent activities of daily life such as combing the hair, sewing, gathering silk thread, picking cotton, picking fruit, washing clothes, drawing water, serving tea, and more. For Uzbek dance, the performer may wear a long gown and decorative crown, to the back of which is fastened a scarf gathered and slightly fanned at the top. Hair is usually done in long braids below waist length. Recently, character shoes have replaced colorful slippers or bare feet. The traditional elegant and sumptuous robes, the adornment of silver jewelry and precious stones has given way to lighter costuming using countless sequins. Formerly, the code of modesty observed by women resulted in loose-fitting garments which have now been tightened up to more clearly show the form....Ferghana: The valley of Ferghana is situated in the eastern part of Uzbekistan. It was called the Khanate of Kokand. The classical dance of Ferghana is a lyrical dance with expansive, serpentine arm and hand movements. The style is ornate, the dances performed to classical texts while soft and tender expressions of the face, representing goodness and purity are prized. Arm movements like those of classical Uzbek dance are also encountered in Iranian, Afghan and "Oriental" dance."....http://www.katjadaniela.ch/pages_en/dancestyles.html

Hopi Dances....."The Hopi believe that for six months out of the year, the Kachina spirits live in the Hopi villages. After the Home Dance in late July or early August, the Kachinas return to the San Francisco Peaks for six months. The Hopi believe that these dances are vital for the continued harmony and balance of the world."....http://en.wikipedia.org/wiki/Hopi_mythology

"Kagura is the ancient Shinto ritual dance of shamanic origin. The word "kagura" is thought to be a contracted form of kami no kura or "seat of the kami" or the "site where the kami is received." There is a mythological tale of how kagura dance came into existence. The sun goddess Amaterasu became very upset at her brother so she hid in a cave. All of the other gods and goddesses were concerned and wanted her to come outside. Ame-no-uzeme began to dance and create a noisy commotion in order to entice Amaterasu to come out. The kami (gods) tricked Amaterasu by telling her there was a better sun goddess in the heavens. Amaterasu came out and light returned to the universe.".... Kobayashi, Kazushige; Knecht, Peter, "On the Meaning of Masked Dances in Kagura", Asian Folklore Studies 40 (1): 1, 1981

"The Gurdjieff movements are the name given to the collective body of sacred dances that were collected or authored by G. I. Gurdjieff and taught to his students as part of the work of self observation and self study......Gurdjieff taught that the movements were not merely calisthenics, exercises in concentration, and displays of bodily coordination and aesthetic sensibility: on the contrary, in the movements was embedded real, concrete knowledge, passed from generation to generation of initiates.....The movements are purportedly based upon traditional dances that Gurdjieff studied as he traveled throughout central Asia, India, Tibet, the Orient and Africa where he encountered various Indo-European and Sufi orders, Buddhist centers and other sources of traditional culture and learning.However, Gurdjieff insists that the main source as well as the unique symbol of the Enneagram was transmitted to him as an initiate in the Sarmoung Monastery, located somewhere in the heart of Asia, about twelve days' journey from Bukhara by horse.....(200 Miles)."......http://en.wikipedia.org/wiki/Gurdjieff_movements

"Green Corn Dance......It's like a big prayer..." We call it a "dance," but it is much more complex than that. It is performed, but it is not a performance as our dances are. It is a philosophical/regigious statement, but the participating dancers are all silent. Pueblo Corn Dances are held at many Pueblos and at many times during the year. The largest one is held at Santo Domingo Pueblo at the beginning of August. No photography is allowed. No admission is charged.....Few non-Indians have witnessed a Green Corn Dance, a special spiritual event held at undisclosed South Florida locations each spring. At the Green Corn Dance, Seminoles participate in purification ceremonies......

"Sama (Arabic: سَمَاع‎ - samā‘un, Turkish Sema) is a Sufi ceremony performed as dhikr. Sama means "listening", while dhikr means "remembrance".These rituals often includes singing, playing instruments, dancing, recitation of poetry and prayers, wearing symbolic attire, and other rituals. It is a particularly popular form of worship in the Chisti order of the Indian subcontinent....“Sama” meaning “the Universe” is a dance that allows the dancer to become focus in the inner spiritual world of himself/herself and as the result become able to connect with the universe though Sama’s unique choreography moves. The main move of Sama is a continues turn of the dancer/worshiper. The dancer turns around a circle and also turns around himself/herself until feels the meditation is happening. This is an act of improvisation and it continues until he/she sees herself as part of the network of the Universe. Once connected, there is no Me or You exist....Humans, plants, the sky, the water, the air, the fire, the stars, the mountains, the animals, the planets, etc. are the same; they are all the manifestation of different faces."

Ghost Dance....."...dances associated with a movement among Native American peoples of the Southwest and Great Plains in the late 19th century. Ghost dance prophets foretold the imminent disappearance of whites, the restoration of traditional lands and ways of life, and the resurrection of dead ancestors....the first European contact with the practice came by way of the Sioux, their expression Spirit Dance was adopted as a descriptive title for all such practices. This was subsequently translated as "Ghost Dance".....Mooney, James. The Ghost Dance Religion and Wounded Knee. New York: Dover Publications; 1896

"Tajikistan was known for it's virtuoso dancers and dance schools from past centuries. Amazingly fast hand and arm movements characterize solo women’s dance. The dancer may even travel across the floor on her knees. There are two types of Tajik women's dance, that which portrays daily activities and that, which expresses love, separation and inner emotions. Men's dances could be categorized as war dance, performed with a sword or dagger, and comic dance in which props such as a scarf, large platter, pitcher, knives or spoons are used....traditional Tajik dance.... “Scholars in this field are ill informed about the history and sources of [this] regional dance,” he said. “Those performed in our country are stage dances we inherited from the Soviet era. ".....http://centralasiaonline.com/en_GB/articles/caii/features/2008/05/28/feature-07

D.H. Lawrence @ Lobo Ranch, near Taos, New Mexico.....July 1924.....""To tell the truth I am sick to death of the monotheistic string......It has become monomaniac. I prefer the pagan many gods, and the animistic version. Here at this ranch in Taos, looking west over the desert, one knows that all of our Pale-Faced and Hebraic monotheistic insistence is a dead letter....the soul won't answer any more. Here we have a camp under the hanging stars, and we sit with the Indians around the fire, and they sing till late into the night, and sometimes we dance the Indian thread dance.....".....Lawrence's primary literary effort was to re-sacralize the world, to awaken in his readers their long lost power to recognize the sacred in themselves and in the living environment....."

DANCE..."These (Shangshung) incantations are thought to develop spiritual power, especially in the form of a dance. There were some visualizations...meant to be combined with the incantation and dance practice." (Trungpa...1978)....gar gyi cho ga: dance ritual....gar gyis rol pa: sensuous dance...gar ma: goddess of dance... glu gar: song and dance...rdo rje"i gar rgya: vajra dance and mudra...dhyangs 'cham: dance performed to a chanted melody....shigs se shig: to sway and whirl in dance...khrab mkhan: one who wears armor, dancer..."Lasya is the bodhisattva of dance, she is more performer than dancer, the offering goddess who displays the beauty and dignity of the body." (Trungpa: 1975..pg 18)..."Gurdjieff's work with the music of circles and the state reached in dance was very closely connected with his knowledge of the Wheel of Time. If done correctly, the Wheel of Time will begin to spin, and the dancer's body becomes the instrument leading to the sacred gates of Hurqalya, which is the Sufi name for Shambhala." (Kharatidi: 1996..pg 218)...'While performing the ecstatic dance, the Pawo rings the bell (dril bu) with the left hand and brandishes the drum (rNga chung) in the right." (Nebesky: 1952..pg 151)..."The tamarisk walls were lined with hundreds of people. With mincing steps, the Tibetan girls would walk to the center of the hall and when the music (wooden drums and fantastic fiddles) started, she would begin to dance, using both skill and charm, and with an exaggerated coyness, sing a love song into the white cuff of her long sleeve....he was able to rise and dance before her in the difficult, stilted and dignified classical Tibetan style." (Clark: 1954...pg 98)...."a Mongol dancer danced the legendary 'Flying Crane Dance' and another the 'Nomad Dance'" (Clark: 1954..pg 334)...Altynai Asylmuratova of the Kirov Ballet...."they made many offerings of song and dance. They performed the great Kagyu folk dance."..(Nalanda: 1980..pg 275)...


DON JUAN..."Don Juan described Silvio Manuel as a dancer who adopted the magical passes of the sorcerers of ancient times to the steps of his modern dancers." (Castaned: 1998..pg 14)...