"Dasho Sangay Wangchuk, advisor to Bhutan's department of Cultural Affairs in the Home Ministry, acknowledges that Buddhist practice in Bhutan has had an overpowering influence from Bon. "In my opinion and from my observations, the influence has been great. Although Buddhism is our faith, I think many of our rituals are not only derived from Bon but are based on Bon beliefs" ...http://www.raonline.ch/pages/bt/rel/btrel_bon02.html

"While we in Bhutan may be Buddhists in faith, it seems that we are more Bon in our daily rituals. In the past, because of our lack of understanding of Bon, we simply relegated it to the villages (of earlier Kuensel article written by Rinzin Wangchuk), where animals were sacrificed and Yul lhas worshipped. But Bon actually constitutes more than that......"Bon: The Magic Word - The Indigenous Religion of Tibet", an ongoing exhibition at the Rubin Museum of Art in New York, is the world's first exhibition ever on Bon.....To a viewer, the showcased pieces of art are no different from Tibetan-Buddhist paintings. But a picture of what may be (or look like) Buddha Sakyamuni is actually Tonpa Shenrab, Bon's founding father. A painting of what may resemble the Tara is the Bon goddess Sherab Chemma. The differences are so slight that it takes a Bonpo or Buddhist expert to recognize them....Jeff Watts, Director and Curator for the Himalayan Art Resource, says that some ways to identify Bon art would be to look for distinctive symbols, objects and the number of disciples or attendants. The Buddha is usually depicted with two, while Tonpa Shenrab has four or more figures. The latter is also shown sometimes with a sceptre and a lotus hat beside him....Hand gestures also help. In the Bon meditation posture, the left hand is placed, palm up, over the right hand, which is also depicted palm up. In the Buddhist tradition, it is the reverse. But Bon artists weren't always consistent with these depictions and that adds to present day confusion. Rainbows and indigenous animals of Tibet like the otter, bear, yak, wild ass (kyang) and bamen are also said to be more common in Bon art.".....http://www.raonline.ch/pages/bt/rel/btrel_bon02.html

"Gyeshe Samdrup Dorji is a Bonpo Gyeshe from the Bon Menri monastery in India. He is a student of Menri Trizin, the highest Bonpo Lama today. Gyeshe Samdrup's mother is a Bhutanese and, while visiting her in Bhutan a few years ago, he came upon a monastery in the district of Wangduephodrang called Shaa Sidpai Gang. He was curious since Sidpai Gyalmo is the arch Deity for the Bonpos...I made some enquiries and I found that the local deity was indeed Sidpai Gyalmo. I was very surprised to discover that. It seems that Bon is very much there," he said. According to him Bonpo texts also claim that a Bonpo Dzongchen master, Shanshung Nyenju, meditated at Taktshang long before Guru Rinpoche made it famous.".....http://www.raonline.ch/pages/bt/rel/btrel_bon02.html

"There are two kinds of Bon in Bhutan, he said, Bon Karpo (Yungdrung Bon) and Bon Nagpo (Black Bon)..... a Kasho was issued several years ago by the Je Khenpo to stop animal sacrifice. by the Nagpo"....http://www.raonline.ch/pages/bt/rel/btrel_bon02.html

"NAGPO-CHENPO....Also known as MAHAKALA.....One of the DHARMAPALAS....He is identified with SHIVA in righteous wrathful Tibetan Buddhist mode.....Mahākāla is a Sanskrit bahuvrihi of mahā (महत्; "great") and kāla (काल; "black"). The literal Tibetan translation is "Nagpo Chenpo" (Tibetan: ནག་པོ་ཆེན་པོ།) though, when referring to this deity, Tibetans usually use the word "Goinbo" (མགོན་པོ།—the translation of the Sanskrit word Nāth meaning "lord" or "protector") instead."....http://en.wikipedia.org/wiki/Mahākāla

"Yangti Nagpo, Black Quintessence.....The Yanti Nagpo, the "Single Golden Syllable of the Black Quintessence" (yang ti nag po gser gyi 'bru gcig), a cycle of teachings belonging to the Yangti yang ti class of Ati Yoga (a ti yo ga). It contains practices upon the Hundred and Peaceful and Wrathful Deities and the Great Perfection, with some pith instructions upon the practice of meditation in complete darkness.".....http://rywiki.tsadra.org/index.php/Yangti_Nagpo

"Vestiges of Bon, the pre-Buddhist beliefs of Tibet, can still be found in Bhutan. Moreover, Bhutan has a rich folk religion (luso). Bhutanese folk beliefs are primarily concerned with a range of spirits, like nep or local deities who act as the custodian of particular valleys such as Chungdu in Haa, or Radak in Wangdue Phodrang. Other spirits reside in rocks or groves of trees; there are tshomen, goddesses who inhabit the lakes, rivers and wells. Sadak are lords of the earth and tsen are air spirits who can bring illness and death.".....http://www.footprintsrecruiting.com/teaching-in-bhutan/1014-religion-and-spirituality-in-bhutan 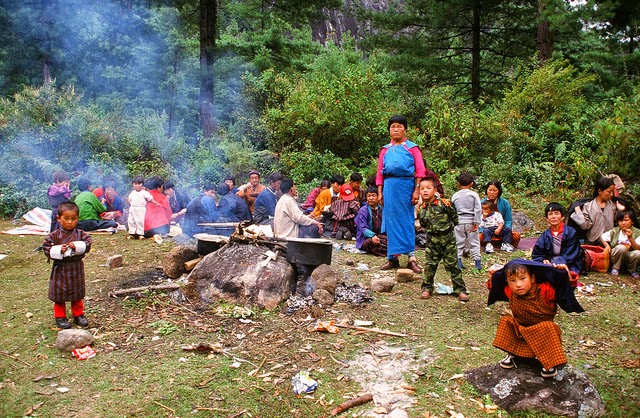 "Bon Festival, Bhutan, 2002 ......These people are attending a Bon festival in the mountains near Paro. The Bon religion originated in Tibet and has its roots in pre-Buddhist religious practices that were characteristic of animistic and shamanist religious groups. Persecution of the Bonpo people in Tibet caused many to emigrate to Nepal and Bhutan....Photo: Terry Feuerborn....https://www.flickr.com/photos/travfotos/6287388712/

"Goshing Chodpa: a symbiosis of Bonism and Shamanism......The Chodpa is the most auspicious annual event in the Kheng region. It is observed during the second week of the tenth month of the Bhutanese calendar for three days. Although in many parts of Kheng priests and lay monks perform rimdo and mask dances during Chodpa, invocation of deities and spirits by bon priest and shaman is also common in lower Kheng like Nangla and Goshing. It takes place from the 14th to the 16th days of the 10th month. While the former is performed for the general well being the latter is performed to control epidemics, famines and usher good harvest.It is exactly not known when and how the latter kind of Chodpa prevailed in the Kheng region. However, during the invocation recitals, the Bonpo and the Pamo make special references to the existence of such practices predating the arrival of Zhabdrung in the early 17th century.".....http://www.kuenselonline.com

Dzong-kha, a Tibetan dialect in Bhutan, contains several grammatical items similar to those in Old Zhangzhung.....Dzongkha is no doubt a dialect of Tibetan. The majority of its lexical items find their origins in Old Tibetan. However, Dzongkha shows grammatical forms -i and ni, which are not found in other Tibetan dialects and are characteristic to both Dzongkha and Zhangzhung".....The Present Stage of Deciphering Old Zhangzhung Tsuguhito Takeuchi and Ai Nishida...........http://ir.minpaku.ac.jp/dspace/bitstream/10502/4236/1/SES75_010.pdf

"Bhutan....Each year in Laya a household will hold its own ritual called a Choku that is carried out to honour the deities and spirits that protect that house. The Choku is a time of great celebration where members of the village are invited to join in the ritual for two or three days' festivity. These ceremonies are pre-Buddhist in their origins and involve the village shaman or Pow. For example, in Laya there is the 'Bongkpo' festival that is held in May and that celebrates the onset of spring bringing fertility to crops and livestock.".....http://www.bbc.co.uk/tribe/tribes/layap/ 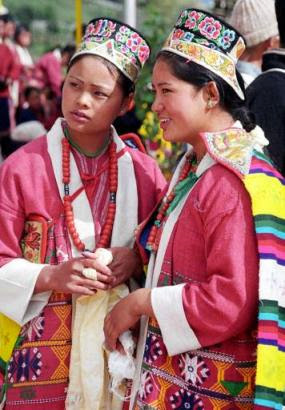 "The Monpas of Bhutan are a close-knit community. They live and work in groups and have joint family system. Family decisions are usually made by the male head of the family. In the absence of the male family head, the decision might be taken by the female family head. At times this is done collectively. Bonism was the main religion before the advent of Buddhist doctrines. But they still remain the faithful adherents of the former. The Monpas of Trongsa do have the stories of Guru Padmasambhava who they claim visited their place on the way to Bumthang via Nabgikorphu. But their faith on Bonism remained undeterred, say the researchers. Altars are almost absent in all the Monpas households. Animal sacrifice was practiced until recently during the Bon rituals though this practice is today substituted by offerings of boiled eggs.".......http://www.kuenselonline.com/a-glimpse-into-the-monpa-community/#.Ua33IhxG-9A