Kunzang Akor: the All-good 'A' Circle is a meditational form of Shenlha Okar. He is generally recognized by the Tibetan letter 'A' placed on the chest at the level of the heart. The two hands generally rest in the lap and hold the stems of two flower blossoms supporting a yungdrung (svastika) on the right and a vase on the left. There are numerous traditions of ritual cycles and meditation practices for Kunzang Akor.....http://www.himalayanart.org/search/set.cfm?setID=1387 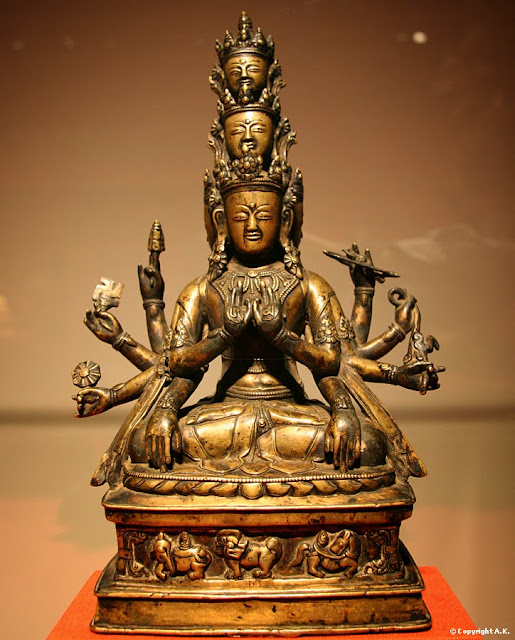 "Kunsang Galwa Dupa, the principal tranquil deity in the pantheon of the Bonpo religion (which coexisted with Buddhism in Tibet), has five heads and ten hands. He sits with the soles of his four feet facing upward. The hands in front of his chest hold sun and moon discs inscribed with the Tibetan letters A and Ma; these symbols help us to recognize this image as Bonpo rather than Buddhist. Among Kunsang Galwa Dupa's symbolic implements is the swastika, the Bonpo equivalent of the Buddhist thunderbolt, symbolizing indestructibility and good fortune. The square pedestal below the lotus throne is guarded by a dragon, an elephant, a lion, a horse, and a peacock. This image wears a type of five-leaf crown peculiar to western Tibet. The modeling of the body and the silver inlay in the eyes show a distinct influence from the art of Kashmir in northern India and Pakistan. Images from the Bonpo religion are rare in museum collections.".....Asian Art Museum of San Francisco

Shenlha Okar | Kunzang Akor....Tibetan: Kunzang Akor (kun bzang a bskor)......The deity Kunzang Akor is the meditational form of Shenlha Okar. He is generally recognized by the Tibetan letter 'A' placed on the chest at the level of the heart. The two hands are generally placed in the lap and hold the stems of two flower blossoms supporting a yungdrung (svastika) on the right and a vase on the left. There are numerous traditions of ritual cycles and meditation practices for Kunzang Akor. It is also common to have a sculpture of Kunzang Akor created as a death memorial. In Tibetan Buddhism it is more common to have a painting created in memorium however in the Bon Religion creating a sculpture is more common and considered best.".....http://www.himalayanart.org/search/set.cfm?setID=683 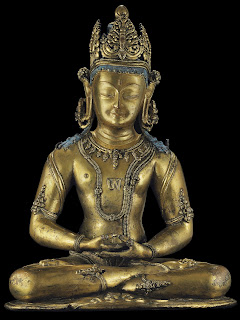 "Kunzang Akor is the meditational form of the Bon deity Shenla Okar and is recognized here by the Tibetan letter “a” on his chest. The Bon religion pre-dates Buddhism in Tibet yet was heavily influenced by the arrival of the Indian tantras in the 10th-12th centuries, hence the Buddha-like appearance of Kunzang Akor. Likely commissioned in memoriam of a passed loved one, a sculpture such as this would have generated a great deal of religious merit for its patron. Bonpo differences from Buddhist iconography can be found in the presence of finger rings and in the prominence of the “a” on the chest, not found in any Buddhist deities. The deity would have been flanked by a swastika representing the eternal teachings of Bon on the proper right and a vase representing long life on the proper left yet the two implements have been lost.".....http://www.walteraraderart.com/himalayan-art/himalayan-bronze/tibetan-bronze