"The Rainbow Body, Tibetan Kings, dmu-thag, Agganna Sutta by AilurusFulgens......It is said that the first Tibetan kings descended from heaven through rope-like structures called dmu-thag and after their time on Earth was up they returned back to heaven in a similar fashion."......http://www.dharmawheel.net/viewtopic.php?f=48&t=5270#p55919

The dates attributed to the first Tibetan king, Nyatri Tsenpo (Wylie: Gnya'-khri-btsan-po), vary. Some Tibetan texts give 126 BC, others 414 BC.[Norbu, Namkhai. The necklace of gZi: A Cultural History of Tibet (1989) Narthang.]

"Nyatri Tsenpo is said to have descended from a one-footed creature called the Theurang, having webbed fingers and a tongue so large it could cover his face. Due to his terrifying appearance he was feared in his native Puwo and exiled by the Bön to Tibet. There he was greeted as a fearsome being, and he became king."....Norbu 1989

"The Tibetan kings were said to remain connected to the heavens via a dmu cord (dmu thag) so that rather than dying, they ascended directly to heaven, when their sons achieved their majority.[Geoffrey Samuel, Civilized Shamans: Buddhism in Tibetan Societies, Smithsonian Institution Press, Washington 1993 p.441]

According to various accounts, king Drigum Tsenpo (Dri-gum-brtsan-po) either challenged his clan heads to a fight,[Rolf A.Stein, Tibetan Civilization, Faber, London 1972 pp.48f.Samuel, ibid p.441] or provoked his groom Longam (Lo-ngam) into a duel. During the fight the king's dmu cord was cut, and he was killed. Thereafter Drigum Tsenpo and subsequent kings left corpses and the Bön conducted funerary rites.[Haarh, The Yarluṅ Dynasty. Copenhagen: 1969.] 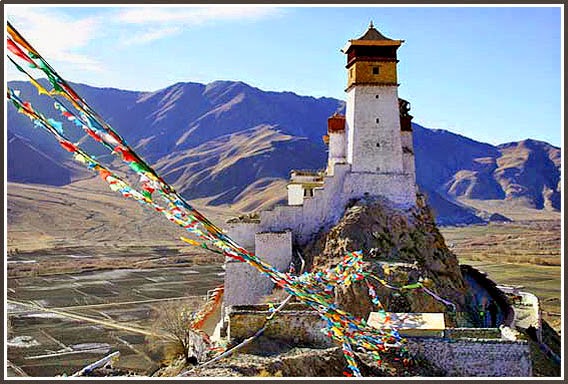 Yumbulakhang castle gracefully guarding over the Yarlung valley. With over 2000 years history, it would have been the oldest building in Tibet if it had not been destroyed in the Cultural Revolution. It was rebuilt in 1982. The initial building it is believed to have been build by Nyatri Tsenpo, first tibetan king......http://www.studio25.ro/albums/road-to-tibet

"Nyatri Tsenpo (Wylie: gNya'-khri bTsan-po; Tibetan Pinyin: Nyachi Zanbo) was a king of Tibet suggested to have descended from an Indian dynasty.[1] He was a legendary progenitor of the so-called "Yarlung dynasty". His reign is said to have begun in 127 BC. According to traditional Tibetan history, he was the first ruler of the kingdom. He is said to have descended from heaven on Yalashangbo, the sacred mountain. Due to certain physical peculiarities – his hands were webbed, and his eyelids closed from the bottom and not the top – he was hailed as a god by locals, and they took him as their king. This is reflected in his name; Tsenpo means "sovereign", while nyatri means "enthroned by the neck". According to Bön legend, the first Tibetan building, Yumbulagang, was erected for the king. The year of his enthronement marks the first year of the Tibetan calendar; the Tibetan New Year, the Losar, is celebrated in his honor......Tibetan mythology holds that the first kings were immortal, and would be pulled up to heaven by a cord which had first deposited them on earth. This is what is said to have happened to Nyatri Tsenpo as well."......Bsod-nams-rgyal-mtshan (Sa-skya-pa Bla-ma Dam-pa) (1994). The Mirror Illuminating the Royal Genealogies: Tibetan Buddhist Historiography : an Annotated Translation of the XIVth Century Tibetan Chronicle : RGyal-rabs Gsal- Baʼi Me-long. Otto Harrassowitz Verlag. pp. 138–. ISBN 978-3-447-03510-1.

The Mythology of Tibetan Mountain Gods: An Overview.....by Xie Jisheng....."The phrase for “heavenly rope” in Tibetan is dmu-thag-smu-thag. The word dmu appears relatively late in Tibetan literature. Dmu is written as mu in Dunhuang literature, and etymological comparisons between various Tibeto-Burmese languages strongly suggests that mu- in Tibetan refers to “the heavenly god.” As for the word dmu-thag, I believe it to be closely connected to the Tibetan word for “rainbow” (vjav). A rainbow could well be understood by early societies as a rope connecting heaven to earth, a rope sent down by the heavenly gods. Literally, dmu-thag means “the heavenly gods’ rope.” According to Tibetan literature, when the Tibetan king btsanpo died he looked like a rope under the “rainbow,” and he went up to the heavens along the dmu-thag. It seems, then, that there is an intimate relationship between dmu-thag and vjav. In Pelliot’s Tibetan text no. 126.2 (“The Formation of Dmu-thag”), we read that “from the lights in the sky and fog over the sea came the white curdle of the Bon religion. It is stretched by the wind, woven into threads, and wound round a tree. It is known as Dmuthag or g.yang thag (“fortune rope”).” This text clearly identifies dmuthag with the rainbow."....http://journal.oraltradition.org/files/articles/16ii/Xie_Jisheng.pdf

sMu-thag ("Bridge of IHa") or sMu-skas ("Rope of ... of " priests" entered the religious arena: the Dur-, sKu- ,gNam- and dMu gShen.....Female Stereotypes in Religious Traditions edited by Ria Kloppenborg

Tucci. We may add here that the compound rmu-thag is also well known in the alternative spelling dmu—thag and that smu-thag too is attested in the texts.......http://sealang.net/sala/archives/pdf8/coblin1987note.pdf

"Shijie (屍解) was a practice whereby Daoists transcended death through means of a simulated corpse. This enabled them to live for long periods of time. Other forms of transcendence which did *not* use the simulated corpse method resulted in flying into the heavens, sometimes in broad daylight, and sometimes on celestial chariots."......Campany, Robert Ford. 2002, To live as long as heaven and earth: a translation and study of Ge Hong's traditions of divine transcendents, Berkeley: University of California Press. 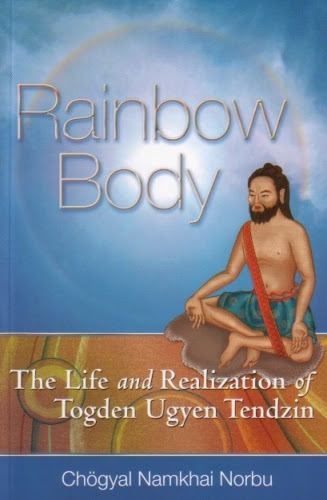