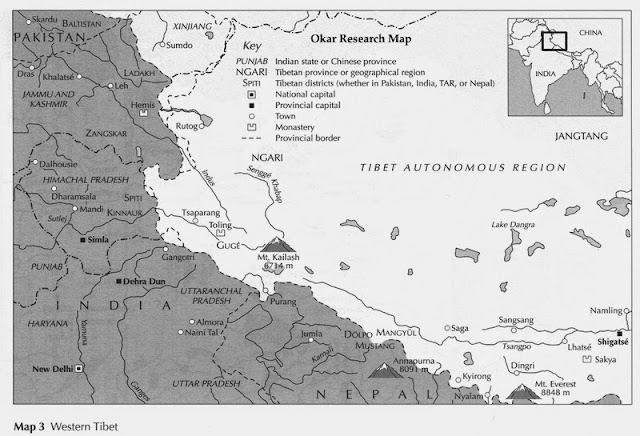 "Guge was an ancient kingdom in Western Tibet. The kingdom was centered in present-day Zanda County, within Ngari Prefecture of Tibet. At various points in history after 10th century AD, the kingdom held sway over a vast area including south-eastern Zanskar, Upper Kinnaur, and Spiti valley either by conquest or as tributaries. The ruins of the former capital of Guge kingdom are located at Tsaparang in the Sutlej valley, not far from Mount Kailash and 1,200 miles (1,900 km) westwards from Lhasa.....".....http://en.wikipedia.org/wiki/Guge 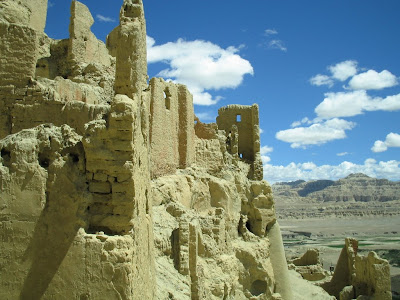 "Tsaparang was the capital of the ancient kingdom of Guge in the Garuda Valley, through which the upper Sutlej River flows, in Ngari Prefecture (Western Tibet) near the border of Ladakh. It is 278 km south-southwest of Senggezangbo Town and 26 km west of the 11th century monastery at Thöling, and not far west of Mount Kailash and Lake Manasarovar. The Tsaparang Dzong was located here. Nearby is the Bon monastery of Gurugem.....Tsaparang is a huge fortress perched on a pyramid-shaped rock rising about 500 to 600 feet (152 to 183 m) at the end of a long narrow spur. It contains numerous tunnels and caves that have been carved out of the rock. At its base was a village where the common people lived. Above them were two public temples - the Lhakhang Marpo (Red Chapel) and the Lhakhang Karpo (White Chapel), and quarters for the monks. Further up, ascending a twisting stone staircase in a tunnel, were the royal quarters, and at the very top, the summer palace.:.....http://en.wikipedia.org/wiki/Tsaparang

"In 1037, Khor re's eldest grandson 'Od lde was killed in a conflict with the Muslim Qarakhanids from Central Asia, who subsequently ravaged Ngari. His brother Byang chub 'Od (984-1078), a Buddhist monk, took power as secular ruler. He was responsible for inviting Atisha to Tibet in 1040."....http://en.wikipedia.org/wiki/Guge

TV Presenter and historian Michael Wood, in the "Shangri-La" episode of the BBC TV/PBS documentary series In Search of Myths and Heroes, suggested that Tsaparang was the historical origin of the legend of Shangri-La, and that its two great temples were once home to the kings of Guge.......http://en.wikipedia.org/wiki/Tsaparang

Stein, Rolf A. “The indigenous religion and the bon-po in the Dunhuang manuscripts.” In The History of Tibet, Volume I, Alex Mckay (ed.). Translated into English from French by Peter Richardus. London & New York: Routledge Taylor & Francis Group, 2003.

"t was in the far-western regions that Tibetans first established permanently inhabited cities. From 2,800BC this was known as ‘heartland’ in contrast to Central Tibet which was known as the ‘outlying‘ area. A succession independent semi-feudal states developed, the most notable being the Kingdom of Gu-ge on the banks of the Sutlej river immediately north of the main Himalaya."......http://www.greenkiwi.co.nz/footprints/frames/gu.htm

Guge Kingdom......For centuries Hindus, Buddhists, Jains and the followers of Bon have revered Mount Kailash as the most sacred pilgrimage destination in Asia. It is common for pilgrims to do circumambulation of the sacred mountain, commonly called kora or parikrama. Here four of Asia's greatest rivers - the Indus, the Brahmaputra, the Karnali and the Sutlej find their source. But it is the lone conical summit of Kailash with its swastika-resembling scar that is most magnificent. At the base of this great mountain are two vast lakes, the holy Manasarovar and Raksas, divided by a narrow isthmus......http://www.dharmaadventures.com/tibet/itinerary.php?t_id=76