"...Linguists and anthropologists refer to Kham as the 'Ethnic Corridor of Southwest China', as its vast and sparsely populated territories are inhabited by over 14 culturally and linguistically distinct ethnic groups. For reasons of simplicity, the Chinese government combines the various ethnic groups of Kham together with the Tibetans to form one big nationality, called the "Tibetan Nationality". There are, however, significant differences in traditions and beliefs—even physical appearance—between the peoples of Kham and Lhasa. At least one-third of Kham residents are speakers of Qiangic languages, a family of twelve distinct but interrelated languages that are not closely related to the Khams Tibetan language..... The people of Kham are reputed warriors....The peoples of Kham have endured a tumultuous past, their sovereignty often encroached upon and marginalized by both Tibetans to the West and the Han Chinese to the East....Since the collapse of the Tibetan Empire in the mid-9th century, the peoples of Kham had aggressively maintained their independence from invading nations".....https://en.wikipedia.org/wiki/Kham 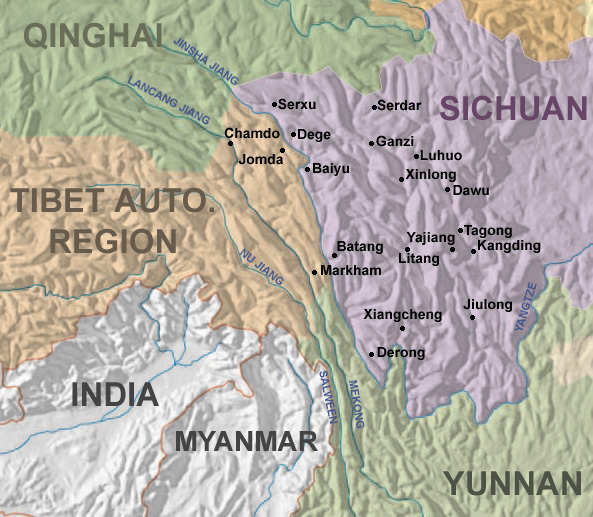 "The Kingdom of Derge was an important kingdom in Eastern Tibet, a center of industry, religion and politics, with the seat of its kingdom in the town of Derge. The kings of Derge followed a 1300-year lineage......The kingdom was an important center in the establishment of the Rime movement.....Rimé is a Tibetan word which means "no sides", "non-partisan" or "non-sectarian". In a religious context, the word ri-mé is usually used to refer to the "Eclectic Movement" between the Buddhist Nyingma, Sakya, and Kagyu traditions, along with the non-Buddhist Bön religion, wherein practitioners "follow multiple lineages of practice." The movement was founded in Eastern Tibet during the late 19th century largely by Jamyang Khyentse Wangpo and Jamgon Kongtrul Lodro Thaye, the latter of whom is often respected as the founder proper. The Rimé movement is responsible for a large number of scriptural compilations, such as the Rinchen Terdzod and the Sheja Dzö."......https://en.wikipedia.org/wiki/Kingdom_of_Derge

"Kham — East Tibet......Although ancient Tibet is slowly disappearing, one would never know it when visiting Kham — Eastern Tibet. Buddhist monasteries and nunneries flourish with thousands of monks and nuns devoutly studying and practicing Buddhism like they have done for centuries......As you travel throughout Kham you will come to discover the incredible natural beauty of this region of Tibet with its high grasslands, deep gorges, glacier filled lakes and magnificent snow capped peaks."......http://www.wisdom-study-abroad.com/kham/

"For some six hundred years, the lineage of Trungpa Rinpoches has served as the abbots of Surmang Dutsi Til monastery in Kham......Rig'dzin Chenpo Chögyam Trungpa Rinpoche, the 11th Trungpa Tulku, was born in 1939, in Géjé, near Pa-gö Punsum Mountain, in Kham.".....http://www.konchok.org/trungpa-lineage.html

"...Large numbers of Sogdian refugees came to Ordu-Baliq to escape the Islamic conquest of their homeland. They converted the Uyghur nobility from Buddhism to Manichaeism. Thus, the Uyghurs inherited the legacy of Sogdian Culture. Sogdians ran the civil administration of the empire. They were helpful in outflanking the Chinese diplomatic policies which had destabilized the Göktürk Khaganate. In AD 840, following a famine and civil war, the Uyghur Khaganate was overrun by the Kirghiz, another Turkic people. As a result the majority of tribal groups formerly under Uyghur control migrated to what is now northwestern China, especially to the modern Xinjiang Uyghur Autonomous region.".....http://en.wikipedia.org/wiki/History_of_the_Uyghur_people