Advaita Vedanta & the Origins of Dzogchen 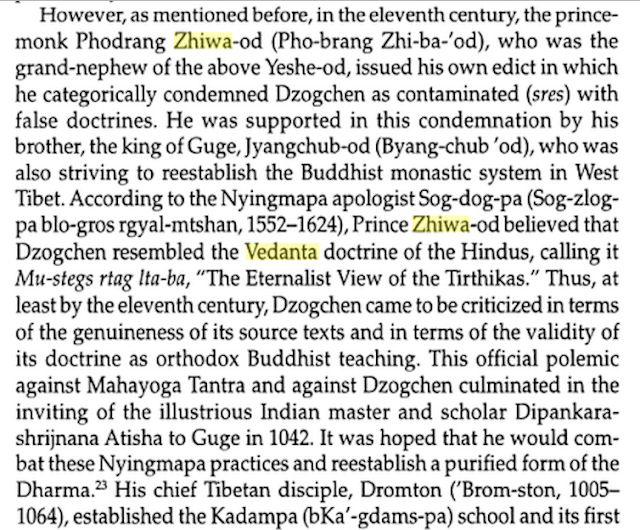 "Advaita Vedanta is a sub-school of the Vedanta school of Vedic philosophy and religious practice,.....The key source texts for all schools of Vedānta are the Prasthanatrayi......Advaita (not-two in Sanskrit) refers to the identity of the true Self, which is pure consciousness, and the highest Reality, which is also pure consciousness......Followers seek liberation/release by acquiring vidyā......Advaita thought can also be found in non-orthodox Indian religious traditions, such as the tantric Nath tradition....Advaita Vedanta developed in interaction with the other traditions of India ... Buddhism, Vaishnavism and Shaivism, as well as the other schools of Vedanta......In modern times, due to western Orientalism and Perennialism, and its influence on Indian Neo-Vedanta and Hindu nationalism, Advaita Vedanta has acquired a broad acceptance in Indian culture and beyond as the paradigmatic example of Hindu spirituality."

The Upanishads are sometimes referred to as Vedanta ("Last part of Veda")....More than 200 Upanishads are known, of which the first dozen or so are the oldest and most important and are referred to as the principal or main (mukhya) Upanishads. The mukhya Upanishads are found mostly in the concluding part of the Brahmanas and Aranyakas and have been passed down in oral tradition. They all predate the Common Era, possibly from the Pre-Buddhist period (6th century BCE) down to the Maurya period."....King, Richard; Ācārya, Gauḍapāda (1995), Early Advaita Vedānta and Buddhism: the Mahāyāna context of the Gauḍapādīya-kārikā, SUNY Press

"Sannyasa....The Renouncer Tradition.....The second half of the first millennium BCE was the period that created many of the ideological and institutional elements that characterize later Indian religions. The Renouncer Tradition played a central role during this formative period of Indian religious history....Some of the fundamental values and beliefs that we generally associate with Indian religions in general and Hinduism in particular were in part the creation of the Renouncer Tradition. These include the two pillars of Indian theologies: samsara - the belief that life in this world is one of suffering and subject to repeated deaths and births (rebirth); moksa/nirvana - the goal of human existence....."....Flood, Gavin; Olivelle, Patrick (2003), The Blackwell Companion to Hinduism... p. 273-274.

"Jalaluddin Rumi - great Persian poet (1207 - 1274 A.D.)....Call of advaita from Persia' within the Advaita Vedanta section:
The lamps are different but the Light is the same,
it comes from Beyond;
If thou keep looking at the lamp, thou art lost; for thence arises
the appearance of number and plurality;
Fix the gaze upon the Light and thou art divested from the
dualism, inherent in the finite body;
O Thou who art the kernel of existence, the disagreement
between Muslim, Zoroastrian and Jew depend upon the stand-point."
http://www.indiadivine.org/content/topic/1050904-jalaluddin-rumi-call-of-advaita-from-persia/

"Advaita Vedanta in Hinduism and Sufism in Islam. There are such significant similarities in their ontology..Sufism is akin to Advaita Vedanta. Their belief lies in the non dual Absolute and that the Truth (Haqiqa) lies at the heart of all things and yet is beyond all determination and limitation....one of the most famous Indian philosophers of all time is Sankaracarya or Sankara, who is believed to have lived in the 8th century AD....He established a monastic order, the Dasanamis."...https://tamaraalom.wordpress.com/self-in-sufism-advaita-vedanta-and-psychology/

"Dashanami Sampradaya ("Tradition of Ten Names") is a Hindu monastic tradition of "single-staff renunciation" (ēkadaṇḍisannyāsi) generally associated with the Advaita Vedanta tradition.....Single-staff renunciates are distinct in their practices from Shaiva trishuldhari or "trident-wielding renunciates" and Vaishnava traditions of Tridandi sannyāsis."......Journal of the Oriental Institute (pp 301), by Oriental Institute (Vadodara, India).

"For many Mâdhyamikas, Dzogchen is a sort of Chinese Dharma like Ch'an or coming from Advaita Vedânta, Kashmiri Shaivism, or even Persian religion. This discussion is ongoing. Parties do not seem willing to really listen to one another .... Although Dzogchenpas claim to agree with Mâdhyamaka regarding self-emptiness, identifying the primordial base of all phenomena with the self-empty "Dharmakâya", the teachings do affirm the natural state of the mind to be of the nature of clarity, to be "from the very beginning" inseparable from this base."....http://www.sofiatopia.org/bodhi/dzogchen.htm

"Tagzig, Zhang-Zhung, Western Tibet -......In Tibet there is a minority religion called Bon that long preceded the coming of Buddhism. Present-day Bon practice allies it with Buddhism. However, the original practice may have been quite different......According to Bon tradition, the founder of the orthodox Bon doctrine was Tonpa Shenrab Miwoche of Tagzig some 18,000 years ago. Tagzig is believed to be a form of Tajik and some writers identify the region with Balkh/Bactria. The name Shenrab has an Iranian sound to it......The Bon religion was spread by Shenrab's disciples and their student-translators to adjacent countries such as Zhang-Zhung (also Zhangzhung, Shang Shung or Xang Xung - a land north of the Himalayas, which contained Mount Kailash in today's Western Tibet), India (northern Indus valley cf. Bru-zha / Gilgit), Kashmir (Kha-che), Western China and eventually Greater Tibet......Tagzig is more completely called Tagzig Olmo Lung Ring and is described in Bon as a non-dual (one which resides beyond dualism) spiritual realm.... Tagzig Olmo Lung Ring is said to have been a fragrant land, coloured by beautiful flora and surrounded by snow-capped mountains. It was located west of Mount Kailash."....http://zoroastrianheritage.blogspot.com/2011/07/iranian-aryan-connections-with-western.html

"The Avesta and Rig Veda.....The Indo-Iranian group whose members composed the Zoroastrian scriptures, the Avesta, and the Hindu scriptures, the Rig Veda, called themselves Aryans (Airya/Airyan in the Avesta and Arya/Aryan in the Vedas). .....The Rig Veda is the older portion of the Vedas. The Avesta and Rig Veda are the only known ancient texts that contain references to Aryans. ....Similarity in Avestan & Rig Vedic Languages: The languages of the two scriptures, the Zoroastrian Avesta and Hindu Rig Veda, are similar but not identical, indicating that at the time of their composition, the people of the Avesta and the Rig Veda were related and close neighbours - in a fashion similar to two provinces within one country - provinces where the people spoke two dialects of the same language.....The history of the Aryans is found in the scriptures of the original Aryans, the Avesta, the Rig Veda, supporting religious texts, and the legends as well - legends such as the Shahnameh of Ferdowsi.".....http://heritageinstitute.com/zoroastrianism/aryans/index.htm