Metempsychosis & the Samsaric Cycle of Existence (570 BC)

"Metempsychosis.....the Greek concept of the transmigration of the soul. Metempsychosis (Greek: μετεμψύχωσις) is a philosophical term in the Greek language referring to transmigration of the soul, especially its reincarnation after death. Generally, the term is only used within the context of Ancient Greek philosophy, but has also been used by modern philosophers such as Schopenhauer and Kurt Gödel; otherwise, the term "transmigration" is more appropriate. The word plays a prominent role in James Joyce's Ulysses, and is also associated with Nietzsche.Another term sometimes used synonymously is palingenesia....The doctrine of Metempsychosis is one of the oldest of the human race."

"Julius Caesar recorded that the druids of Gaul, Britain and Ireland had metempsychosis as one of their core doctrines."

"The earliest Greek thinker with whom metempsychosis is connected is Pherecydes of Syros; but Pythagoras, who is said to have been his pupil, is its first famous philosophic exponent.....The real weight and importance of metempsychosis in Western tradition is due to its adoption by Plato[citation needed]. In the eschatological myth which closes the Republic he tells the myth how Er, the son of Armenius, miraculously returned to life on the twelfth day after death and recounted the secrets of the other world."

"The Orphic religion........Orpheus, its legendary founder, is said to have taught that soul and body are united by a compact unequally binding on either; the soul is divine, immortal and aspires to freedom, while the body holds it in fetters as a prisoner. Death dissolves this compact, but only to re-imprison the liberated soul after a short time: for the wheel of birth revolves inexorably. Thus the soul continues its journey, alternating between a separate unrestrained existence and fresh reincarnation, round the wide circle of necessity, as the companion of many bodies of men and animals."......Such was the teaching of Orphism which appeared in Greece about the 6th century BC, organized itself into private and public mysteries at Eleusis and elsewhere, and produced a copious literature....The Orphic religion, which taught reincarnation, first appeared in Thrace in north-eastern Greece and Bulgaria, about the 6th century BC,." 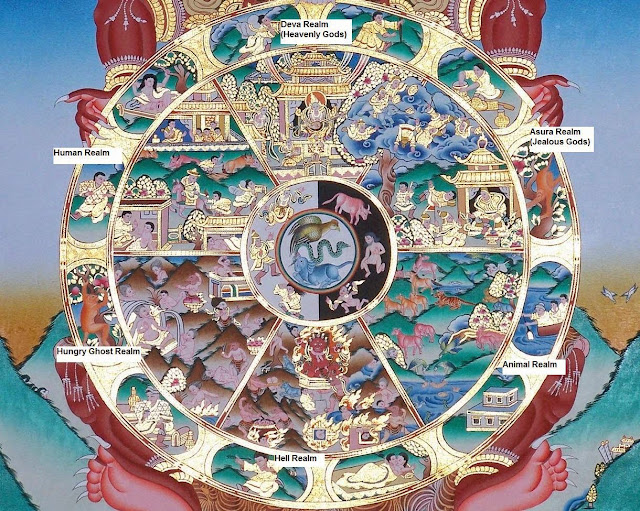 The Wheel of Life depicting the 6 realms of cyclic existence

"Saṃsāra (Sanskrit: संसार) (in Tibetan called khor ba "སམསར", pronounced /kɔrwɔ/, meaning "continuous flow" and in Sinhala called sangsāra "සංසාර" meaning "eternal cycle"), is the repeating cycle of birth, life and death (reincarnation) as well as one's actions and consequences in the past, present, and future in Hinduism, Buddhism, Bon, Jainism, Taoism and Sikhism.....During the course of each life the quality of the actions (karma) performed determine the future destiny of each person. The Buddha taught that there is no beginning to this cycle but that it can be ended through perceiving reality. The goal of these religions is to realize this truth, the achievement of which (like ripening of a fruit) is moksha or Nirvana (liberation)."

"The Buddhist concept of reincarnation differs from others in that there is no eternal "soul", "spirit" or "self" but only a "stream of consciousness" that links life with life. The actual process of change from one life to the next is called punarbhava (Sanskrit) or punabbhava (Pāli), literally "becoming again", or more briefly bhava, "becoming", and some English-speaking Buddhists prefer the term "rebirth" or "re-becoming" to render this term as they take "reincarnation" to imply a fixed entity that is reborn. Popular Jain cosmology and Buddhist cosmology as well as a number of schools of Hinduism posit rebirth in many worlds and in varied forms. In Buddhist tradition the process occurs across five or six realms of existence, including the human, any kind of animal and several types of supernatural being. It is said in Tibetan Buddhism that it is very rare for a person to be reborn in the immediate next life as a human."....

"In the Rigveda, the oldest extant Indo-Aryan text, numerous references are made to transmigration, rebirth (punarjanma), and redeath (punarmrtyu) in the Brahmanas.... One verse reads, "Each death repeats the death of the primordial man (purusa), which was also the first sacrifice" (RV 10:90). Another excerpt from the Rig Veda states (10: 16. 1-4): 'Burn him not up, nor quite consume him, Agni: let not his body or his skin be scattered. O Jatavedas, when thou hast matured him, then send him on his way unto the Fathers... let thy fierce flame, thy glowing splendour, burn him With thine auspicious forms, o Jatavedas, bear this man to the region of the pious... Again, O Agni, to the Fathers send him who, offered in thee, goes with our oblations. Wearing new life let him increase his offspring: let him rejoin a body, Jatavedas.' 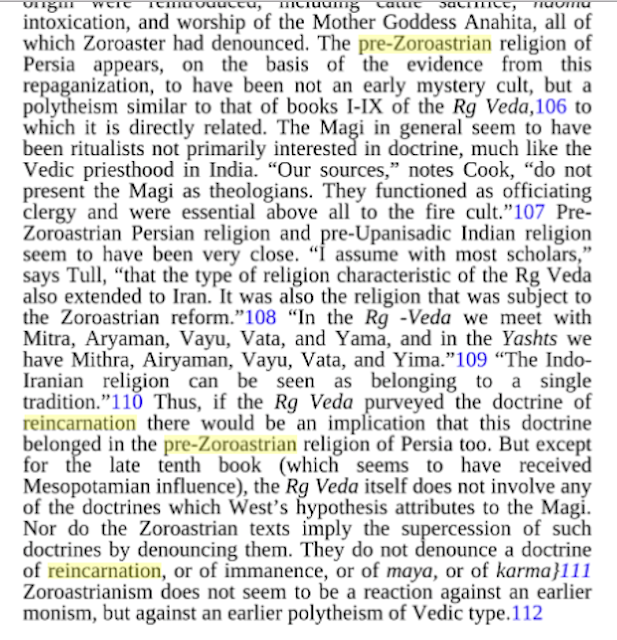 The Shape of Ancient Thought: Comparative Studies in Greek and Indian ...By Thomas McEvilley

"Gilgul, Gilgul neshamot or Gilgulei Ha Neshamot (Heb. גלגול הנשמות) refers to the concept of reincarnation in Kabbalistic Judaism, found in much Yiddish literature among Ashkenazi Jews. Gilgul means "cycle" and neshamot is "souls". The equivalent Arabic term is tanasukh: the belief is found among Shi'a ghulat Muslim sects."....

"The Yazidi religion is a syncretic combination of Zoroastrian, Manichaean, Jewish, Nestorian Christian and Islamic elements......Yazidi are anti-dualists; they deny the existence of evil and therefore also reject sin, the devil, and hell. The breaking of divine laws is expiated by way of metempsychosis, or transmigration of souls, which allows for progressive purification of the spirit. The Yazidi relate that when the devil repented of his sin of pride before God, he was pardoned and replaced in his previous position as chief of the angels; this myth has earned the Yazidl an undeserved reputation as devil worshippers. Shaykh Adi, the chief Yazidi saint, was a 12th century Muslim mystic believed to have achieved divinity through metempsychosis."

"Although the majority of sects within the Abrahamic religions of Judaism, Christianity, and Islam do not believe that individuals reincarnate, particular groups within these religions do refer to reincarnation; these groups include the mainstream historical and contemporary followers of Kabbalah, the Cathars, the Druze and the Rosicrucians. The historical relations between these sects and the beliefs about reincarnation that were characteristic of Neoplatonism, Orphism, Hermeticism, Manicheanism and Gnosticism of the Roman era, as well as the Indian religions, has been the subject of recent scholarly research."....The Shape of Ancient Thought by Thomas McEvilley

"Origen.....During the period from A.D. 250 to 553 controversy raged, at least intermittently, around the name of Origen (183-253 A.D.), and from this controversy emerged the major objections that orthodox Christianity raises against reincarnation. Origen of Alexandria, one of Christianity's greatest systematic theologians, was a believer in reincarnation..... the Emperor Justinian composed a tract against Origen in 543, proposing nine anathemas against "On First Principles", Origen's chief theological work. Origen was finally officially condemned in the Second Council of Constantinople in 553, when fifteen anathemas were charged against him...."