".....a king named Samudra Vijaya arrived at S'ambhala in 618 A.D., and shortly after that the period called, in the Tibetan chronology......Me-kha-rgya-Mtsho, commenced. It is also stated that in 622 A.D., at Makha (Mecca) the Muhamadan religion was established. From what can be gathered from Tibetan histories and works on Kala Chakra it may be conjectured that this S'ambhala, very probably, was the capital of the Bactrian Empire of the Eastern Greeks who had embraced Buddhism. It is also conjectured that the modern city of Balkh must have been the site of their latest capital. The name of King Menander {in Sanskrit: Minendra) who erected a very lofty chaitya (castle) has been mentioned by the Kashmirian poet Ksomendra, in the Avaddna Kalpalata, a work that was finished in about 1035 A.D. ..."...http://archive.org/stream/grammaroftibetan00dass/grammaroftibetan00dass_djvu.txt

"Referring to Samudra Vijaya, Alexander Csoma (1784-1842) in a footnote remarked: "This pretended King's arrival at S'ambhala in 622 AD coincides with Yazdegerd III , (624-651 AD).....the Persian King's taking refuge in the same country upon the fall of Seleucia and the conquest of Persia by the Arabs in 636 AD, retired to Trans-Oxiaea or Ferghana." 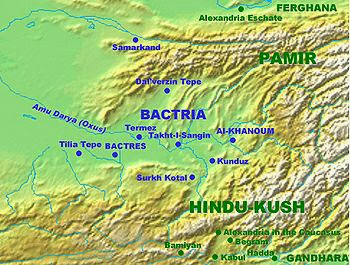 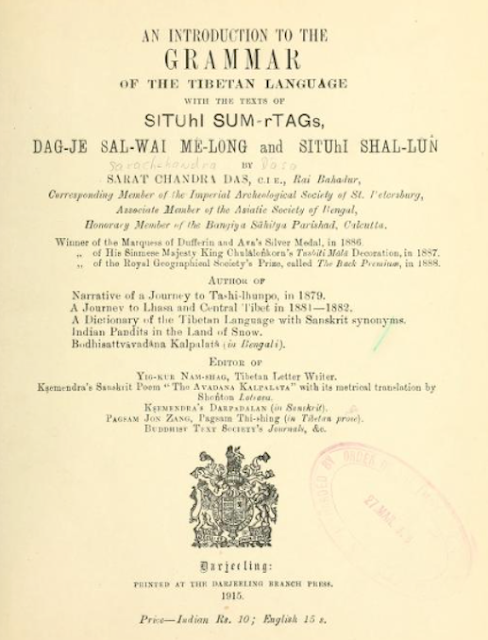 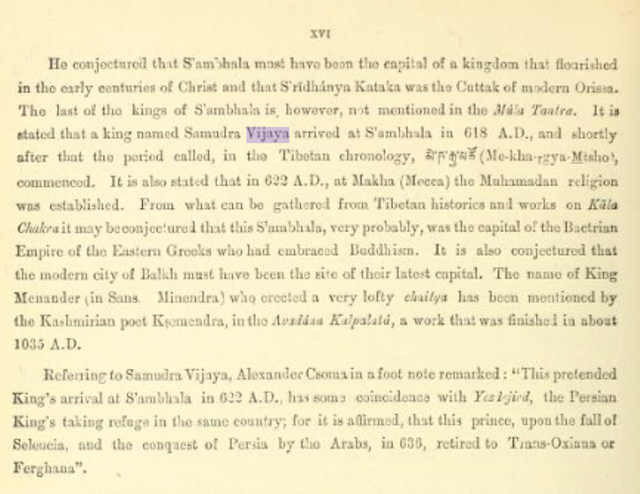 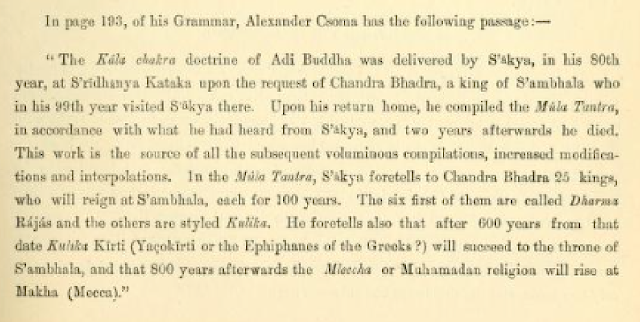 "Samudra is a Sanskrit term for "ocean", literally the "gathering together of waters" (saṃ- meaning "together" and -udra meaning "water". Dictionary meaning of samudra is ‘confluence’ and ‘ocean/sea’.

"Vijaya, a name for the Hindu goddess Shantadurga

"Sarat Chandra Das (Bengali: শরৎচন্দ্র দাস) (1849–1917) was an Indian scholar of Tibetan language and culture most noted for his two journeys to Tibet in 1879 and in 1881–1882......In 1878, a Tibetan teacher, Lama Ugyen Gyatso arranged a passport for Sarat Chandra to go the monastery at Tashilhunpo. In June 1879, Das and Ugyen-gyatso left Darjeeling for the first of two journeys to Tibet. They remained in Tibet for six months, returning to Darjeeling with a large collection of Tibetan and Sanskrit texts which would become the basis for his later scholarship. Sarat Chandra spent 1880 in Darjeeling poring over the information he had obtained. In November 1881, Sarat Chandra and Ugyen-gyatso returned to Tibet, where they explored the Yarlung Valley, returning to India in January 1883."..... Journey to Lhasa and Central Tibet, Das, Sarat Chadra, pp xi–xiii, Paljor Publications, New Delhi, 2001

"Thonmi Sambhota (Thönmi Sambhoṭa, aka Tonmi Sambhodha;, Tib. ཐོན་མི་སམྦྷོ་ཊ་, Wyl. thon mi sam+b+ho Ta; b. seventh cent.) is traditionally regarded as the inventor of the Tibetan script and author of the Sum cu pa and Rtags kyi 'jug pa in the 7th century AD...According to Tibetan tradition, Songsten Gampo sent a young man of the Thönmi or Thumi clan, Sambhoṭa son of Anu (or Drithorek Anu), to India (in 632?) with other youths, to learn the alphabet. The pattern chosen was the script of Kashmir. "

"Situ Paṇchen Chökyi Jungné (Tib. སི་ཏུ་པཎ་ཆེན་ཆོས་ཀྱི་འབྱུང་གནས་, Wyl. si tu paN chen chos kyi 'byung gnas) (1700-1774) — the Eighth Tai Situ. One of the most influential masters in Tibetan history....From 1731-33, he worked on editing and correcting the woodblocks to be used for printing the Derge edition of the Kangyur.....After this was finished, he concentrated his efforts on revising translations of important Sanskrit works, especially of treatises on grammar and poetry." 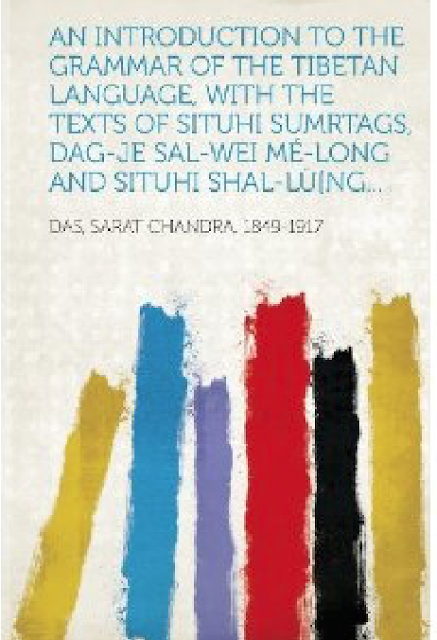 "Legend reports that Vasubandhu came from the "Kingdom of Shambhala' (approximately, modern Begram, otherwise known as the ancient kingdom of Kapisha, north of Kabul) located in the Afghanistan region, north-west of Peshawar....Bagram (بگرام Bagrám), founded as Alexandria on the Caucasus and known in medieval times as Kapisa, is a small town and seat in Bagram District in Parwan Province of Afghanistan, about 60 kilometers north of the capital Kabul….in the old tradition of the 84 Mahasiddhas that the Kingdom of Uddiyana was divided between two countries, to the North and South. To the North, it bordered on the land of Shambhala (i.e., the Kingdom of Kapisa)……"...Website of His Holiness the 17th Gyalwa Karmapa, Urgyen Trinley Dorje………..….http://www.dharmafellowship.org/biographies/historicalsaints/pramodavajra.htm"….