"Asma bint Marwan's Murder: The story of her murder as a result of the direct orders of Muhammad is not mentioned in the Ahadith but is very well documentd by Ibn Ishaq's P. 675.....After the murder of Abu Afak for criticising Muhammad, for the massacre of the Quraysh nobles at Badr, she too became incensed and blamed Muhammad and his followers in a poem- the usual newspapers of the Arabian tribes - condemning them.....For this , once more, Muhammad incited his followers to murder her, which act was committed by Umayr b. 'Adiy al Khatmi with Muhammad's full blessing." 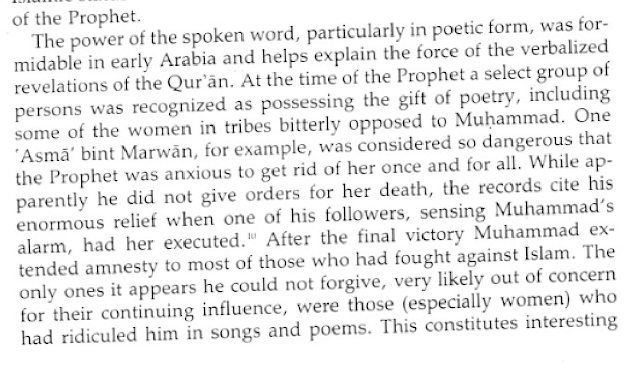 "Jane Smith, in her detailed study "Women, Religion and Social Change in Early Islam" points at the high influence of poets at the time Muhammad in Arabia. She states that executions of poets such as Asma, Abu Afak, and those poets who were killed after Muhammad's final victory were the result of Muhammad's fears of "their continuing influence". "This constitutes interesting testimony of the power of their position, as well as of the recited words".

"ʻAṣmāʼ bint Marwān (Arabic: عصماء بنت مروان‎ "'Asmā' the daughter of Marwān") was a female member of the Ummayad clan who lived in Medina in 7th century Arabia....The story of her death by command of the Islamic prophet Muhammad, after she opposed him with poetry and provoked other pagans to commit violence against him, can be found in the sīra material collected by Ibn Ishaq and Ibn Sa'd."

"The story of bint Marwan and her death appears in the works of Ibn Ishaq and Ibn Sa'd. According to the reports, her family viewed Muhammad and his followers as unwelcome interlopers in Medina. After the Muslim victory over the Quraysh in Mecca in 624 in the Battle of Badr a number of Muhammad's opponents were killed after surrendering. She composed poems that publicly defamed the local tribesmen who converted to Islam and allied with Muhammad, and called for his death. In her poems, she also ridiculed Medinians for obeying a chief not of their kin. Ibn Ishaq mentions that bint Marwan also displayed disaffection after the Medinian Abu Afak was killed for inciting rebellion against Muhammad. The poem said: "do you expect good from (Muhammad) after the killing of your chiefs" and asked: "Is there no man of pride who would attack him by surprise/ And cut off the hopes of those who expect aught from him?" Upon hearing the poem, Muhammad then called for her death in turn, saying "Who will rid me of Marwan's daughter?" Umayr bin Adiy al-Khatmi, a blind man belonging to the same tribe as Asma’s husband (i.e., Banu Khatma) responded that he would. He crept into her room in the dark of night where she was sleeping with her five children, her infant child close to her bosom. Umayr removed the child from Asma's breast and killed her."

"Some classical and post-classical hadith scholars such as Al-Albani, Majdi, and Al-Jawzi have rejected the story, with some declaring it as fabrication, pointing out in their arguments that the chains of transmission by which the story was transmitted are all weak....Hadith (Arabic: حديث‎) in Muslim religious use is often translated as "prophetic traditions", meaning the corpus of the reports of the teachings, deeds and sayings of the Islamic prophet Muhammad. The hadith literature was compiled from oral reports that were in circulation in society around the time of their compilation long after the death of Muhammad....Clerics and jurists of all denominations classify individual hadith as sahih ("authentic"), hasan ("good") and da'if ("weak"). However, different traditions within each denomination, and different scholars within each tradition, may differ as to which hadith should be included in which category."

"The Hadith also had a profound and controversial influence on moulding the commentaries (tafsir) on the Quran. The earliest commentary of the Quran by Muhammad ibn Jarir al-Tabari is mostly sourced from the hadith. The hadith was used in forming the basis of 'Shariah' Law. Much of early Islamic history available today is also based on the hadith and is challenged for lack of basis in primary source material and contradictions based on secondary material available.

"Traditions of the life of Muhammad and the early history of Islam were passed down mostly orally for more than a hundred years after Muhammad's death in AD 632. Muslim historians say that Caliph Uthman ibn Affan (the third khalifa (caliph) of the Rashidun Empire, or third successor of Muhammad, who had formerly been Muhammad's secretary), is generally believed to urge Muslims to record the hadith just as Muhammad suggested to some of his followers to write down his words and actions.....Uthman's labours were cut short by his assassination, at the hands of aggrieved soldiers, in 656. No sources survive directly from this period so we are dependent on what later writers tell us about this period......By the 9th century the number of hadiths had grown exponentially. Islamic scholars of the Abbasid period were faced with a huge corpus of miscellaneous traditions, some of them flatly contradicting each other. Many of these traditions supported differing views on a variety of controversial matters. Scholars had to decide which hadith were to be trusted as authentic and which had been invented for political or theological purposes. To do this, they used a number of techniques which Muslims now call the science of hadith."

"Sunni and Shia hadith collections differ because scholars from the two traditions differ as to the reliability of the narrators and transmitters. Narrators who took the side of Abu Bakr and Umar rather than Ali, in the disputes over leadership that followed the death of Muhammad, are seen as unreliable by the Shia; narrations sourced to Ali and the family of Muhammad, and to their supporters, are preferred. Sunni scholars put trust in narrators, such as Aisha, whom Shia reject. Differences in hadith collections have contributed to differences in worship practices and shari'a law and have hardened the dividing line between the two traditions."

" Jihad ("struggle" in Arabic).....Jihadism is used to refer to contemporary armed jihad in Islamic fundamentalism. The term "jihadism" is coined in the 2000s and mostly used to cover Islamic insurgency and terrorism since that time, but it has also been extended to cover both Mujahideen guerilla warfare and Islamic terrorism with an international scope since it arose in the 1980s, since the 1990s substantially represented by the al-Qaeda network..... Contemporary jihadism ultimately has its roots in the late 19th and early 20th century ideological developments of Islamic revivalism, developed into Qutbism and related ideologies during the mid 20th century. Its rise was re-enforced by the Soviet invasion of Afghanistan in 1979....Jihadism with an international, Pan-Islamist scope in this sense is also known as Global Jihadism. Generally the term jihadism denotes Sunni Islamist armed struggle. Sectarian tensions led to numerous forms of (Salafist and other Islamist) jihadism in opposition of Shia Islam, Sufi Islam and Ahmadi Islam."

"Jihad Cool is a term used by Western security experts concerning the re-branding of militant Jihadism into something fashionable, or "cool", to younger people through social media, magazines,rap videos, clothing, toys, propaganda videos, and other means. It is a sub-culture mainly applied to individuals in developed nations who are recruited to travel to conflict zones on Jihad. For example Jihadi rap videos make participants look "more MTV than Mosque".

"A Muslim, sometimes spelled Moslem, relates to a person who follows the religion of Islam, a monotheistic Abrahamic religion based on the Quran."

"Islam (Arabic: الإسلام‎, al-ʾIslām) is a monotheistic and Abrahamic religion articulated by the Qur'an, an Islamic holy book considered by its adherents to be the verbatim word of God (Allāh), and for the vast majority of adherents, also by the teachings and normative example (called the Sunnah and composed of hadith) of Muhammad (c. 570–8 June 632 CE), considered by them to be the last prophet of God. An adherent of Islam is called a Muslim." 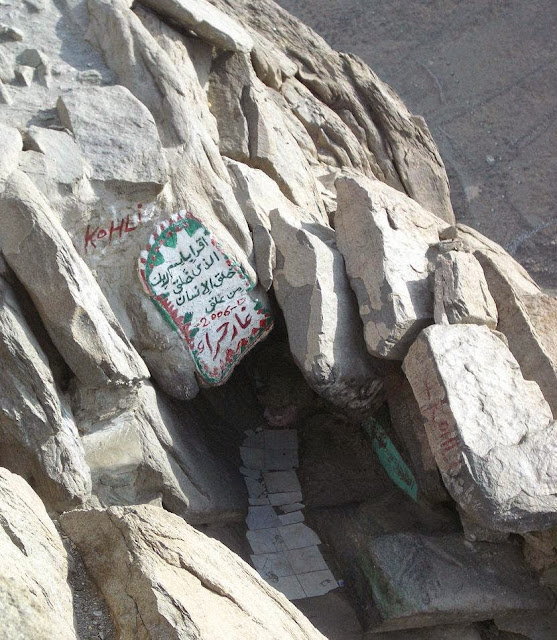 "The Prophet Muhammad received his first revelation in 610 AD.... from Allah through Angel Jibreel (Gabriel) in the cave called Hira, located on the mountain called Jabal an-Nour, near Mecca."

"The first command that came to Muhammad at the first revelation was to "Read", the question is: Would Muhammad be asked to read if he cannot read?.....The Hadith followers conveniently fabricated a hadith to counter act this argument. According to this hadith, Muhammad replied to Gabriel "I cannot read"! So Gabriel commanded him once more to "Read", and once again Muhammad gave the same reply, then the rest of the sura was given to him......This hadith makes Gabriel look like an idiot asking someone who cannot read to read then insisting on his request when Muhammad keeps insisting he cannot read, and since at the end of this curious exchange the matter was still unresolved and Muhammad was still unable to read (according to the hadith followers) then how did he receive the rest of the revelation?.....The hadith followers say that he did not need to be able to read to receive the revelation! But if that is so, then why did Gabriel ask him to read in the first place?.....Whichever way we look at it, the concept of this hadith is ridiculous to say the least. But that is not all, the Arabic words, which Muhammad is supposed to have said to Gabriel (according to the hadith), are "Ma ana bi qari" which could mean "I cannot read", but can also mean "I am not going to read"... When Muhammad died, he left the complete Quran written down with his own hand in the chronological order of revelation, along with specific instructions as to where to place every verse. "

"Muslims believe the Quran was verbally revealed by God to Muhammad through the angel Gabriel (Jibril), gradually over a period of approximately 23 years, beginning on 22 December 609 CE,when Muhammad was 40, and concluding in 632 CE, the year of his death...According to the traditional narrative, several companions of Muhammad served as scribes and were responsible for writing down the revelations."