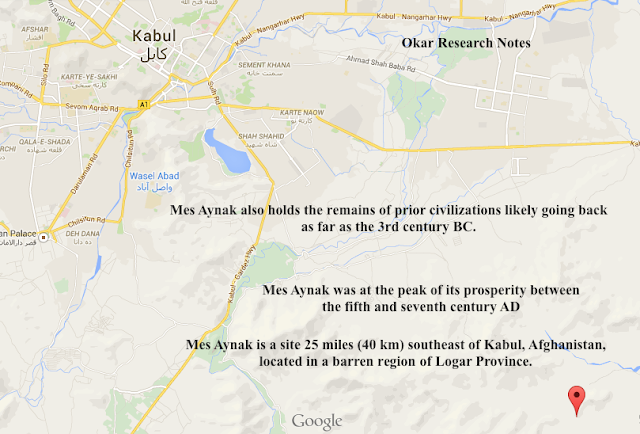 "Mes Aynak (Pashto: مس عینک‎, meaning "little source of copper" from 'ayn = source) is a site 25 miles (40 km) southeast of Kabul, Afghanistan, located in a barren region of Logar Province. The site contains Afghanistan's largest copper deposit, as well as the remains of an ancient settlement with over 400 Buddha statues, stupas and a 100-acre (40 ha) monastery complex. It is also considered a major transit route for insurgents coming from Pakistan. Archaeologists are only beginning to find remnants of an older 5,000-year-old Bronze Age site beneath the Buddhist level including an ancient copper smelter.....The site of Mes Aynak possesses a vast compilation of Buddhist monasteries, homes, and market areas. The site contains artifacts recovered from the Bronze Age, and some of the artifacts recovered have dated back over three thousand years. The sites orientation on the Silk Road has yielded a mixture of elements from Iran, China and India. The wealth of Mes Aynak’s residents has been well represented in the sites far-reaching size and well guarded perimeter. The country of Afghanistan’s eagerness to unearth the massive amounts of copper below the site, is unfortunately leading to the site’s destruction rather than it’s preservation.....The Buddhist ruins were scheduled to be destroyed at the end of July 2012, but for several reasons, including political instability, this has been delayed, possibly until the end of 2014." 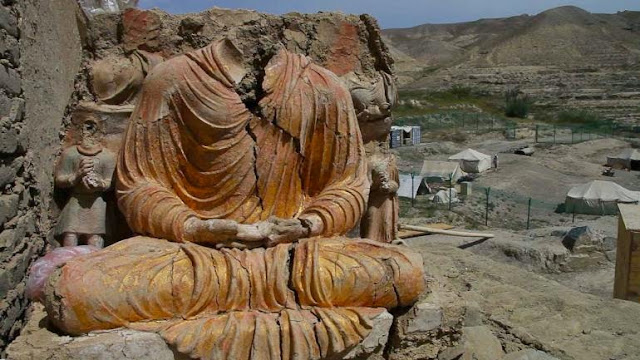 A Buddha statue discovered at the Mes Aynak archaeological site in the eastern province of Logar, in Afghanistan. .....http://www.ibtimes.com/china-afghanistans-minerals-archaeologists-still-scrambling-save-mes-aynak-1668808

"The earliest Buddhist remains date from the Kushan Gandhara era, although these gradually give way to T'ang Chinese and Uyghur influences. Mes Aynak was at the peak of its prosperity between the fifth and seventh century AD, a period of slow decline began in the eighth century and the settlement was finally abandoned 200 years later." 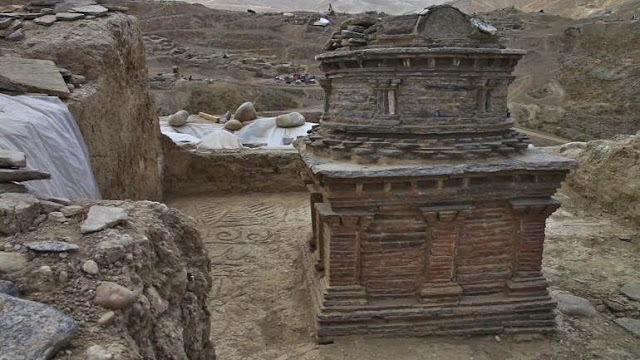 "Archaeologists believe that Mes Aynak is a major historical heritage site. It has been called "one of the most important points along the Silk Road" by French archaeologist, Philippe Marquis. There are thought to be 19 separate archaeological sites in the valley including two small forts, a citadel, four fortified monasteries, several Buddhist stupas and a Zoroastrian fire temple, as well as ancient copper workings, smelting workshops, a mint, and miners habitations. In addition to the Buddhist monasteries and other structures from the Buddhist era that have already been identified, Mes Aynak also holds the remains of prior civilizations likely going back as far as the 3rd century BC. Historians are particularly excited by the prospect of learning more about the early science of metallurgy and mining by exploring this site. It is known to contain coins, glass, and the tools for making these, going back thousands of years. Archaeologists have already unearthed manuscripts that may provide evidence regarding the presence of Alexander the Great's troops."

"Saving Mes Aynak has been selected for the prestigious FIPA Festival International de Programmes Audiovisuels, screening this January 21, 2015 in Biarritz, France.....Director Brent Huffman, producer Zak Piper.....The film follows Afghan archaeologist Qadir Temori as he races against time to save a 5,000-year-old archaeological site in Afghanistan from imminent demolition by a Chinese state-owned mining company which is eager to harvest $100 billion dollars worth of copper buried directly beneath the archaeological ruins."....http://www.savingmesaynak.com/news/2015/1/7/lvbizut05g5bl517x23zb2vnc5s29t