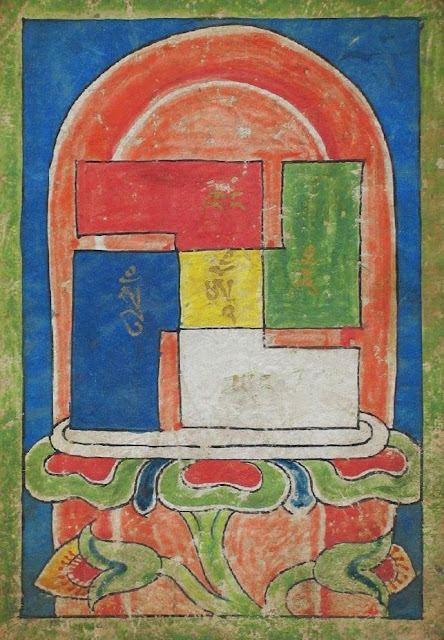 "In general, Buddhism is not overly concerned with the direction the svastika turns. This is not true for the Bon religion, however, where the left-turning yungdrung is the principal symbol of the religion, and a right-turning yungdrung has no meaning. The word is also part of the official name of the religion, Yungdrung Bon—"Everlasting Truth."...... Jeff Watt "Himalayan Buddhist Art 101"....http://www.tricycle.com/blog/himalayan-buddhist-art-101-controversial-art-part-2-svastika

"Tibetan translators worked under a top-down system in which royal edicts decreed the correct Tibetan word to be used for every Buddhist Sanskrit term. ...One of the problems for the early translators was what to do with certain important and powerful words that came from the pre-Buddhist culture of Tibet....One of the most powerful and resonant words in pre-Buddhist Tibet was yungdrung (g.yung drung). It was a the key terms for the old royal religion, the mythological backdrop to the kingly lineage of the Tibetan Empire. For example, the inscription of the tomb of Trisong Detsen has the line: “In accord with the eternal (yungdrung) customs (tsuglag), the Emperor and Divine Son Trisong Detsen was made the ruler of men.”... we see “the eternal dharma” (g.yung drung chos) in many Dunhuang manuscripts. Translators of Chinese Buddhist scriptures into Tibetan used it to translate nirvana. Translators of Sanskrit Buddhist scriptures used it to translate the Sanskrit samyak, meaning “correct” or “perfect”, as well as various Sanskrit terms meaning “eternal”. This messy scene begins to look more like the chaos that bedevils contemporary translation efforts.. .......Buddhism and Bön III: what is yungdrung?....http://earlytibet.com/2008/04/30/buddhism-and-bon-iii-what-is-yungdrung/.......early Tibet: Notes, thoughts and fragments of research on the history of Tibet..... Sam van Schaik, based at the British Library, working for the International Dunhuang Project, where I am currently a principle investigator in the project Beyond Boundaries: Religion, Region, Language and the State (ERC). My previous research projects include Tibetan Zen (British Academy) Tibetan and Chinese paleography (Leverhulme) and the Tibetan tantric manuscripts from Dunhuang (AHRC).

"Beyond Present, Past, and Future Is The Fourth Moment.....totality is taking place. A very precise something or other is happening. That is the state of vipashyana. It is nonverbal and nonconceptual and very electric. It is neither ecstasy nor a state of dullness. Rather, a state of “hereness” is taking place, which is described in the Tibetan Buddhist literature as nowness. Nowness is sometimes referred to as the fourth moment. That may sound more mystical than what is meant. You have the past, present, and future, which are the three moments. Then you have something else taking place, which is called the fourth moment. The fourth moment is not a far-out or extraordinary experience as such. It is a state of experience that doesn’t even belong to now. It doesn’t belong to what might be, either. It belongs to a non-category—which provides another sense of category. Thus it is called the fourth moment. That is the state of vipashyana, or the state of non-ego. The Tibetan term for this is lhakthong dagme tokpe sherap, which means “the knowledge of egoless insight.” It is a very real experience in which nothing can be misunderstood. It is such an overwhelming experience. The experience comes at you. You experience it precisely and in great detail."......By Chögyam Trungpa Rinpoche....http://www.shambhalasun.com/index.php?option=com_content&task=view&id=2883&Itemid=0 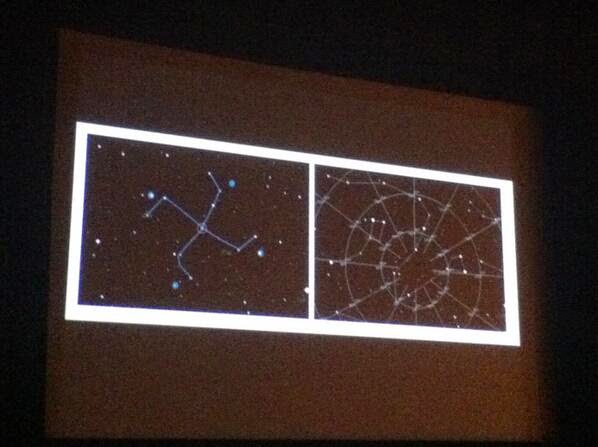 The center star of the Swastika is Zeta Draconis.....Astrobiology Magazine is NASA daily publication

..."The omniscient eye of pristine awareness is an eyeball looking in all directions simultaneously, in the total 360 degree vision of the holistic seed, the source of space-time in the zero dimension. In rigpa, no temporal processes take place; there is no motion. Light has no speed. Nowhere located, the zero dimension is omnipresent, a universal constant and the 'background' and context of all experience. It is Samantabhadra, the silent witness of all. In his all-round perspective, there is no historical judgement, no bias or partiality. This is the zero dimension: Super-Openness....the natural atemporal continum.....".... ( Longchenpa's Precious Treasury of Natural Perfection / Keith Dowman

"Rigpa, the intrinsic reality of total presence, with a 360 degree perspective, free of quantitative bias, unsubstantiated by language or logic. unsigned, neither eternal nor temporal, subject to neither increase not decrease, without directional movement or pulsation, immaculate in the immensity of immanent hyper-sameness, it is seamless openness unconfined by time or space."...... ( Longchenpa's Precious Treasury of Natural Perfection / Keith Dowman

"....our Rigden-related Shambhala practices are closely tied in with the level of cosmic mirror or dharmakaya.".....http://kootenayforestretreat.org/program/ten-day-mahamudra-retreat/

"That “Mind of” [kyi sems] is the unmixed totally complete essence, the primal nature of the eight consciousnesses endowed with a luminous [‘od gsal] identity which inherently never wavers into any extreme at all, free from all extremes, naturally pure and unwavering in the three times. Now then, if it is asked “Is it not impossible for such a pure primal nature to appear to the mind of a person?”, it is possible, called “vidyā” [rig pa, the knowing aspect of the mind]. The vidyā of migrating beings itself appears as the mental consciousness in terms of apprehending subjects and apprehended objects. When vidyā manifests its own primal nature, the mental consciousness manifests as self-originated wisdom, and then the pure basis of the mental consciousness (free from the root of an apprehending subject and apprehended objects) bring samsara to an end. The wisdom of one’s vidyā (without root or leaf) — naturally perfected as it all-encompassingly subsumes everything — is the true state [de kho na nyid]. -- The Sun That Illuminates the Meaning.".....http://awakeningtoreality.blogspot.com/2013/12/clarifications-on-term-rigpa.html.....Malcolm Smith: The Sun that Illuminates the Meaning is a short pithy commentary on one of so called sems sde lungs, The Cuckoo of Vidyā (rig pa'i khu byug).

"..... translating rig pa as "awareness" is passe......Ye shes is normally translated as wisdom or primordial wisdom, but some people these days, following John Pettite and Richad Baron are liking primordial awareness for this.....I back translate rigpa in Sanskrit generally, as vidyā unless it is being used as a verb "to know". Adriano Clemente has stopped translating it altogether, which I approve of. However, since we use terms like dharmakāya, etc., for Buddhist Dzogchen texts at any rate, vidyā is another word that is preferable."....http://awakeningtoreality.blogspot.com/2013/12/clarifications-on-term-rigpa.html

"Düsum Khyenpa (Tibetan: 1110–1193 AD) was the 1st Gyalwa Karmapa, head of the Karma Kagyu school of Tibetan Buddhism.....Düsum Khyenpa means "knower of the three times" (past, present and future). It was given to him to refer to knowledge of the three forms of time he gained at enlightenment including the "timeless time" of enlightened awareness..... He achieved enlightenment at the age of fifty, while practicing dream yoga. He had a vision at that time of the dakinis offering him a vajra crown woven from their hair."....Dzogchen Ponlop Rinpoche. (2003). "Brief Histories of the Sixteen Karmapas".

""The question of Indo-Iranian influence on Bön has been open for a long time now. Seeking to explain some linguistic and cultural parallels, several scholars have brought forward different theories of how and when Bön could have been influenced by the Indo-Iranian culture and religion. These theories could be broadly summed up in four points:
- Bön (Yungdrung Bön) is a stream of Central Asian Buddhism adopted from India by the Iranian speaking regions in the West (such as Kushana Empire and so on) from where it reached the Tibetan Plateau prior to the introduction of Indian Buddhism per se from the South in the 8th century AD. This Central Asian Buddhism, traceable to Buddha Shakyamuni, mixed with the native culture and religion of the Tibetan Plateau producing what is now known as Yungdrung Bön. (Snellgrove, Tucci)
- Bön is a branch of Zoroastrianism or Mithraism and Tonpa Shenrab Miwo was a priest at the court of the Persian king Cyrus the Great of the Achaemenid dynasty. (Gumilev, Kuznetsov)
- Yungdrung Bön is a plagiarized form of Indian Buddhism which emerged after the 8th century AD and any Indo-Iranian - and especially Indian - influence was acquired in this process. (This is the view of many Tibetan Buddhist scholars and some Western scholars who still follow this outdated and flimsy theory.)
- Yungdrung Bön is the original, authentic Central Asian Buddhism taught by the Buddha Tonpa Shenrab Miwo who was born in 16,017 BC (according to tradition) in the Central Asian region of Tagzig (modern-day Tajikistan and surrounding Central Asian states). Tonpa Shenrab Miwo brought Yungdrung Bön teachings to the Zhang Zhung Confederation (tribal union of 18 tribes) and Tibet (at that time only U and Tsang provinces) himself, and that is the source of most Indo-Iranian linguistic and cultural traces found in Tibetan Bön. (This is the traditional Bönpo view)."
SIBERIAN SHAMANISM (BӨ MURGEL) & TIBETAN SHAMANISM (BÖN TRADITION), the anthropologist connections according to the indo-iranian common origin, by Dmitri Ermakov. 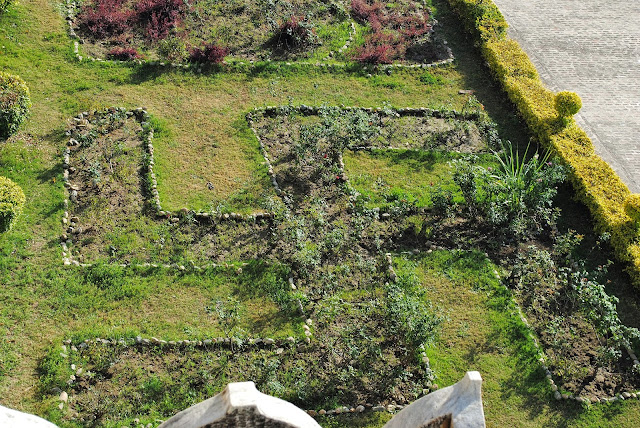