The Origins of Yoni-Lingam & Yab-Yum Images 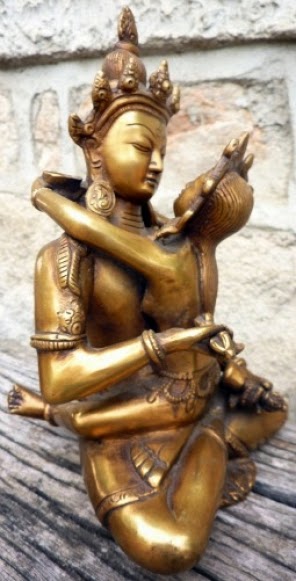 "Yab Yum .... Shiva-Shakti. ...Yoni-lingam. ....Sacred union.......The enlightened ones gaze upon each other with pure devotion, unaffected by earthly desires. The union of god and goddess expresses the balance of male and female, creation and energy. .....Sacred Hindu texts include sexual imagery, which scholars believe is meant to be taken as metaphor; a dialog between the goddess and the god.......The intent of the deities in the yab yum pose is the same as the yoni-lingam forms worshiped in every Shiva temple in India......Shiva-Shakti, the Sacred Marriage of Lady and Lord, depicts a condition of enlightenment where male and female human principles, anima and animus, yin and yang, are perfectly combined in a balanced way.".....http://www.sacredsource.com/ 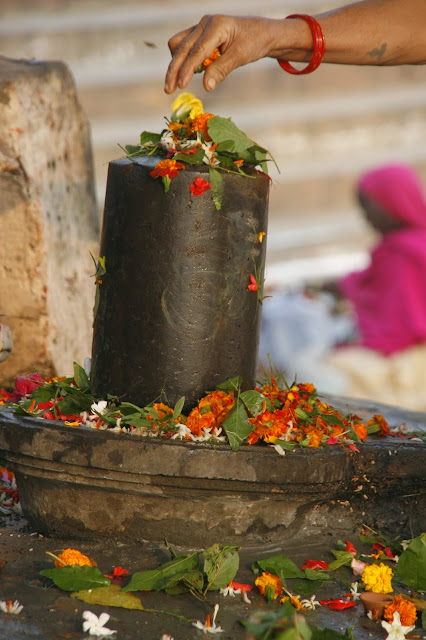 Traditional flower offering to a Lingam in Varanasi

"The lingam (also linga, ling, Shiva linga, Shiv ling, Sanskrit लिङ्गं, liṅgaṃ, meaning "mark", "sign", or "inference") is a representation of the deity Shiva used for worship in temples. In traditional Indian society, the linga is rather seen as a symbol of the energy and potential of Shiva himself. ....The lingam is often represented alongside the yoni, a symbol of the goddess or of Shakti, female creative energy. The union of lingam and yoni represents the "indivisible two-in-oneness of male and female, the passive space and active time from which all life originates".....

"The Shiva Purana describes in its first section, the Vidyeshwar Samhita, the origin of the lingam, known as Shiva-linga, as the beginning-less and endless cosmic pillar (Stambha) of fire, the cause of all causes.....Shiva is pictured as emerging from the Lingam – the cosmic pillar of fire – proving his superiority over gods Brahma and Vishnu....This is known as Lingodbhava..... the linga is considered the first form to arise when creation occurs, and also the last form before the dissolution of creation. "

".... although most sculpted images (murtis) are anthropomorphic, the aniconic Shiva Linga is an important exception....

"There is a hymn in the Atharvaveda which praises a pillar (Sanskrit: stambha), and this is one possible origin of linga-worship......Some associate Shiva-Linga with this Yupa-Stambha, the sacrificial post. In that hymn a description is found of the beginningless and endless Stambha or Skambha and it is shown that the said Skambha is put in place of the eternal Brahman. As afterwards the Yajna (sacrificial) fire, its smoke, ashes and flames, the soma plant and the ox that used to carry on its back the wood for the Vedic sacrifice gave place to the conceptions of the brightness of Shiva's body, his tawny matted-hair, his blue throat and the riding on the bull of the Shiva. The Yupa-Skambha gave place in time to the Shiva-Linga......In the Linga Purana the same hymn is expanded in the shape of stories, meant to establish the glory of the great Stambha and the supreme nature of Mahâdeva (the Great God, Shiva)....." 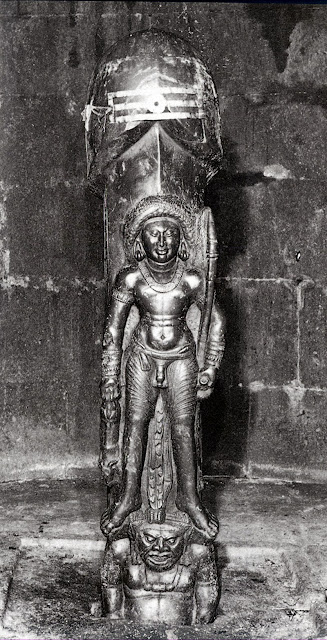 "The oldest example of a lingam in India which is still used for worship is in Gudimallam. According to Klaus Klostermaier, it is clearly a phallic object, and dates to the 2nd century BC.....A figure of Shiva is carved into the front of the lingam.....Gudimallam is a small village located in Srikalahasti Mandal, of the Chittoor district of Andhra Pradesh, India..... 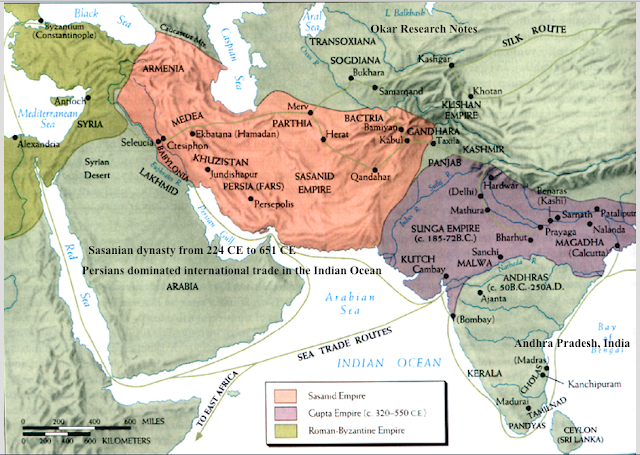 "Shiva, arguably the most ancient of the Indian deities with prehistoric origins is worshipped much more commonly in the form of the Lingam, or the phallus. Shiva is the Cosmic Male, and the Cosmic Father -- The consort of the Great Goddess or Cosmic Mother. Evidence of phallic worship in India dates back to prehistoric times. Stone Lingams with several varieties of stylized "heads", or the glans, are found to this date in many of the old temples, and in museums in India and abroad. The famous "man-size" lingam in the Parashurameshwar Temple in the Chitoor District of the Indian State of Andhra Pradesh, better known as the Gudimallam Lingam, is about 1.5 metres (5 ft) in height, carved in polished black granite. Dated back to ca. 2300–2800 BC, it is one of the existing lingams from the pre-Buddhist period. The almost naturalistic giant lingam is distinguished by its prominent, bulbous "glans", and an anthropomorphic form of Parashurama carved in high relief on the "shaft". Shiva Lingams in India have tended to become more and more stylized over the centuries, and existing lingams from before the 6th century show a more leaning towards the naturalistic style, with the "glans" clearly indicated." 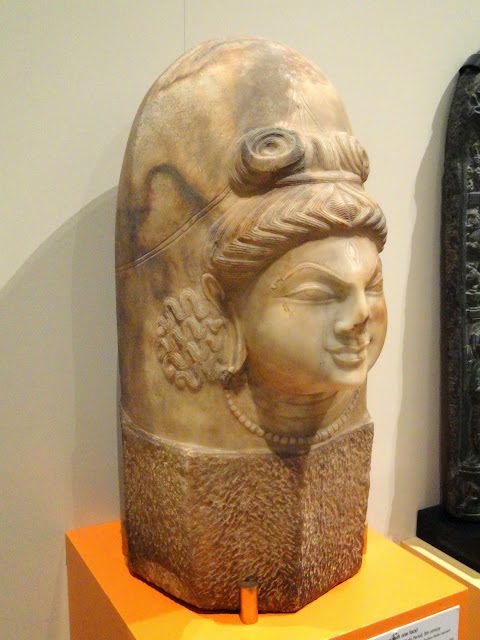 Ekamukhalinga (Shiva linga with one face), Jammu, Kashmir or Afghanistan..."Mukhalinga or Mukhalingam (literally "linga with a face", mukhaliṅga) is a linga with one or more human faces....The one-faced mukhalinga is called eka-mukhalinga, "linga with a single face". ....Mukhalingas are found throughout India[6] and Nepal and Afghanistan....One of earliest specimen of a mukhalinga is a five-faced one in Bhita, which is dated to second century BC....Alain Daniélou says that mukhalingas of Shiva resemble similar depictions of phalluses with carved faces from Greece and those from Celtic Europe. He also notes the phalluses with full human figures are also found in France and India, citing the second-century icon of Gudimallam as an early example."......Alain Daniélou (1995). The Phallus: Sacred Symbol of Male Creative Power.

"The axis mundi (also cosmic axis, world axis, world pillar, columna cerului, center of the world, world tree), in religion or mythology, is the world center or the connection between Heaven and Earth. As the celestial pole and geographic pole, it expresses a point of connection between sky and earth where the four compass directions meet. At this point travel and correspondence is made between higher and lower realms. Communication from lower realms may ascend to higher ones and blessings from higher realms may descend to lower ones and be disseminated to all. The spot functions as the omphalos (navel), the world's point of beginning." 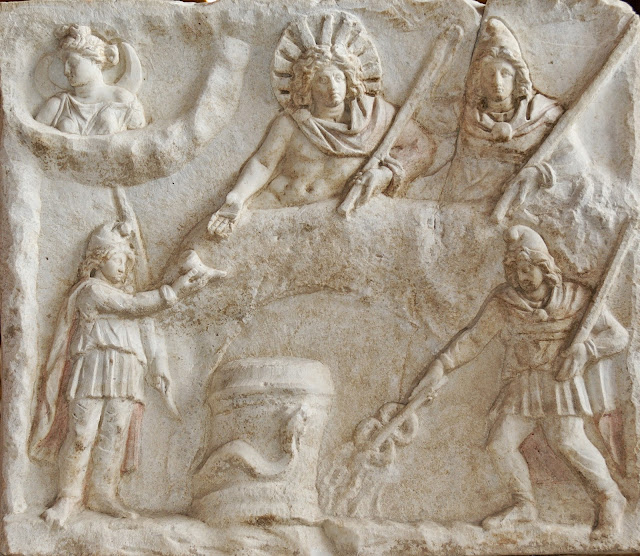 Ancient Roman carving of Mithra – dated between 300-400 CE....Possibly a Shiva Lingum .. 'Mithra' and 'Varun' and two roman solidiers worship lingam (sun god) and to the left its the moon god... (Louvre Museum)

"Stambha....also spelled as Skambha, is believed to be a cosmic column. It is believed that the stambha functions as a bond, which joins the heaven (Svarga) and the earth (prithvi). A number of Hindu scriptures, including the Atharva Veda, have references to stambha. In the Atharva Veda, a celestial stambha has been mentioned, and that has been described as a scaffold, which supports the cosmos and material creation......In Indian architecture, different types of Stambhas have been mentioned....most well known stambhas of India are the ones erected during the reign of Ashoka the Great, and they bear different types of royal edicts."

"Ashoka ascended to the throne in 269 BC inheriting the empire founded by his grandfather Chandragupta Maurya. ....The inscriptions on the pillars described edicts about morality based on Buddhist tenets.... Some of these Stupas contained networks of walls containing the hub, spokes and rim of a wheel, while others contained interior walls in a swastika shape. The wheel represents the sun, time, and Buddhist law (the wheel of law, or dharmachakra), while the swastika stands for the cosmic dance around a fixed center and guards against evil...." 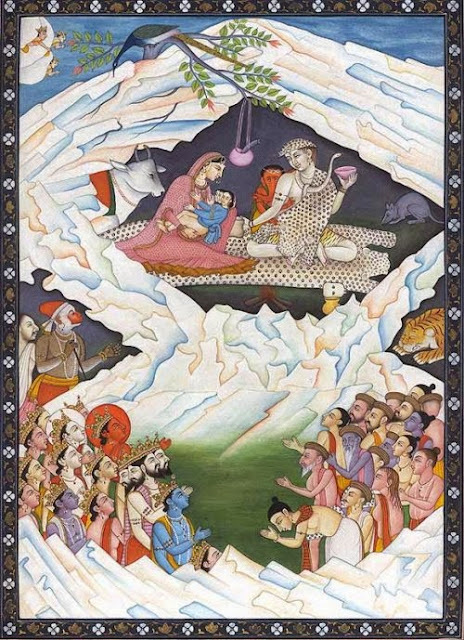 An illustration of the significance of Mount Kailash. It shows the holy family of Shiva and Ganesha.