Breath is Time: the Kalachakra and So Hum Breathing

"Time and the Kalachakra....The fundamental basis of Indian astronomy is a simple expression: "Breath is Time". ...http://www.shivashakti.com/jyot2.htm

"The Kālacakra tradition revolves around the concept of time (kāla) and cycles (chakra): from the cycles of the planets, to the cycles of human breathing, it teaches the practice of working with the most subtle energies within one's body on the path to enlightenment....The Kālacakra refers to many different traditions: for example, it is related to Hindu Shaiva, Samkhya, Vaishnava, Vedic, Upanishadic and Puranic traditions and also to Jainism. The Kālacakra mandala includes deities which are equally accepted by Hindus, Jains and Buddhists."....http://en.wikipedia.org/wiki/Kalachakra

"In the book “In Search of the Miraculous”, an account of Gurdjieff’s teaching by his student P.D.Ouspensky, there is a section relating how Gurdjieff stated that “time is breath”.......Ouspensky began to elaborate on that hint by starting with the human breath....‘Without mastering breathing, nothing can be mastered.’ – P.D. Ouspensky....

"The in-breath is Shakti, feminine, welcoming in, getting fuller. The out breath Shiva, masculine, going towards, emptying... Shiva advises Shakti to be mindful of prana and apana ....Breath is the link between body, mind and spirit. Each breath is a reflection of our desire to live. When that desire to live stops, we stop breathing. Our thoughts and emotions are reflections of the breath and the desire to live. As long as we live in this body, we retain breath, desire, thoughts and emotions."...Shakti & Shiva: Vigyana Bhairava Tantra.....The Vigyan Bhairav Tantra (Sanskrit: विज्ञान भैरव तन्त्र, Vijñāna Bhairava Tantra) is a key text of the Trika school of Kashmir Shaivism. Cast as a discourse between the god Shiva and his consort Devi or Shakti, it briefly presents 112 meditation methods or centering techniques (dharanas). These include several variants of breath awareness, concentration on various centers in the body, non-dual awareness, chanting, imagination and visualization and contemplation through each of the senses." 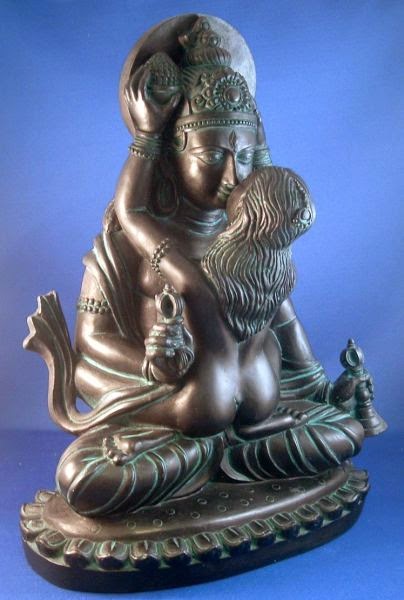 "Shiva Shakti Yab Yum Position.....One of the most common Tantra practices is called Yab Yum, or “Father Mother”. Yab Yum leans on the energetic gender polarity of a man and woman as it manifests in sexual union (intercourse.) The man sits with his legs crossed (Easy Pose or “Criss-Cross Applesauce”) and the woman sits facing him on his lap with her legs wrapped around his torso and lower back. Together, they represent Shiva and Shakti, the complementary divine masculine and feminine energies.....Spend a few minutes slowing and synchronizing your breath.....Pause at the top of each inhalation and at the bottom of each exhalation, creating a moment of mutual stillness..... continue to focus on the breath as the main point of connection.".....Tantra 101: A Practical Guide to Yab Yum. ~ Zoë Kors......http://www.elephantjournal.com/

"Prāṇāyāma (Sanskrit: प्राणायाम prāṇāyāma) is a Sanskrit word meaning "extension of the prāṇa or breath" or "extension of the life force". The word is composed of two Sanskrit words: prana, life force, or vital energy, (noted particularly as the breath), and ayāma, to extend or draw out. (Not "restrain, or control" as is often translated from yam instead of ayāma)."

" ...fourteen different meanings for the word prāṇa (Devanagari: प्राण, prāṇa) including...
Breath, respiration
The breath of life, vital air, principle of life (usually plural in this sense, there being five such vital airs generally assumed, but three, six, seven, nine, and even ten are also spoken of)
Energy, vigor
The spirit or soul

"... prāṇa as "spirit-energy". Its most subtle material form is the breath, but is also to be found in blood, and its most concentrated form is semen in men and vaginal fluid in women."

"...Ujjayi breathing is a breath technique employed in a variety of Taoist and Yoga practices. In relation to Yoga, it is sometimes called "the ocean breath". Unlike some other forms of pranayama, the ujjayi breath is typically done in association with asana practice.....Ujjayi is a diaphragmatic breath, which first fills the lower belly (activating the first and second chakras), rises to the lower rib cage (the third and fourth chakras), and finally moves into the upper chest and throat. The technique is very similar to the three-part Tu-Na breathing found in Taoist Qigong practice.....Inhalation and exhalation are both done through the nose....."Ujjayi" comes from the Sanskrit prefix "ud" (उद्) added to it and root "ji" (जि): "ujji" (उज्जि), meaning "to be victorious". Ujjayi (उज्जायी), thus means "one who is victorious". Ujjayi breath means "victorious breath"."

A simple breathing practice by Tenzin Wangyal Rinpoche....."It is much easier to clear negative thought patterns using the breath than it is using the mind alone. For example, how do you experience a lack of confidence? First you may think to yourself, “Oh, I want to do that!” Then a second thought arises: “I might not be able to do it — I can’t!” Just thinking about your lack of confidence is unlikely to change it. So in that moment, rather than criticizing and judging the second thought that lacks confidence, simply be aware of it. Host that thought in the stillness, silence, and spaciousness. Then, take a deep breath, and as you breathe out, release that thought. It’s like seeing junk mail in your inbox and pressing the delete button; breathing out is like pressing "delete." Right after the exhalation, you will discover a new space within you. That new space is a source of confidence that you can then cultivate."— Geshe Tenzin Wangyal Rinpoche, explaining the role of wind, or prana, in the practice of the Nine Breathings of Purification......http://www.dharmawheel.net

"..... in the past scientist believed the universe was retracting, but now they believe it is expanding, could it be that the universe pulses like breathing in and out.....The universe has been expanding from the beginning. Until about ten years ago, it was thought that it was slowing due to gravity. Then, in a completely unexpected discovery that took the cosmological world by total surprise, it was discovered that the universe had been slowing down until about 6-8 billion years ago, but that since then it has been accelerating."....http://cosmoquest.org

"Eternal return (also known as "eternal recurrence") is a concept that the universe has been recurring, and will continue to recur, in a self-similar form an infinite number of times across infinite time or space. The concept is found in Indian philosophy and in ancient Egypt and was subsequently taken up by the Pythagoreans and Stoics. With the decline of antiquity and the spread of Christianity, the concept fell into disuse in the Western world, with the exception of Friedrich Nietzsche, who connected the thought to many of his other concepts, including amor fati.....In addition, the philosophical concept of eternal recurrence was addressed by Arthur Schopenhauer. It is a purely physical concept, involving no supernatural reincarnation, but the return of beings in the same bodies. Time is viewed as being not linear but cyclical....The concept of cyclical patterns is very prominent in Indian religions, such as Jainism, Hinduism, Sikhism and Buddhism among others. The wheel of life represents an endless cycle of birth, life, and death from which one seeks liberation. In Tantric Buddhism, a wheel of time concept known as the Kalachakra expresses the idea of an endless cycle of existence and knowledge."

"Circular breathing is a technique used by players of some wind instruments to produce a continuous tone without interruption. This is accomplished by breathing in through the nose while simultaneously pushing air out through the mouth using air stored in the cheeks....In 1997, a Guinness World Record was set for longest held musical note. Kenny G used circular breathing to sustain an E-flat on a saxophone for 45 minutes and 47 seconds."

"English haiku: are about 10–14 syllables long, with the second line usually the longest. Some poets want their haiku to be expressed in one breath."....Spiess, Robert; Modern Haiku vol. XXXII No. 1 p. 57 "A haiku does not exceed a breath's length."

"Speech is breath modulated by the physical organism in various ways -- depth of breathing, muscle tension, shape of mouth, shape of mental impressions. The Indian measure is that 10 long syllables make 1 breath."