Havilah, the River Pishon and Ancient Bactria (5000 BC)

"Havilah (literally meaning "Circular"; also spelled Evilas, Evilath via LXX) is in several books of the Bible referring to both land and people....Genesis 2:11: 'And a river went out of Eden to water the garden; and from thence it was parted, and became into four heads. The name of the first is Pishon: that is it which compasseth the whole land of Havilah, where there is gold; And the gold of that land is good: there is bdellium (a resin similar to myrrh) and the onyx stone."

".....Genesis 2:8-17......Now Jehovah had planted a garden in Eden eastward, and he placed there the man whom he formed: for hehad caused to spring from the ground every tree pleasant for sight or good for food; also the tree of life in the midst of the garden, and the tree of the knowledge of good and evil. Now a river issued from Eden to water the garden, and thence it was parted, and became four head-[streams]: the name of the first is Pishon; this [is the one] that surrounds all the land of the Chavilah, where [is] the [metal] gold (the gold too of that land [is] good); there [also is] the [substance called bedolach, and a stone [called] the shoham); and the name of the second river [is] Gichon; this [is the one] that surrounds all the land of Cush: and the name of the third river [is] Chiddekel; this [is the one] that flows east of Ashshur: and the name of the fourth river, that [is] Perath.".....http://www.studylight.org/encyclopedia/mse/print.cgi?n=6061 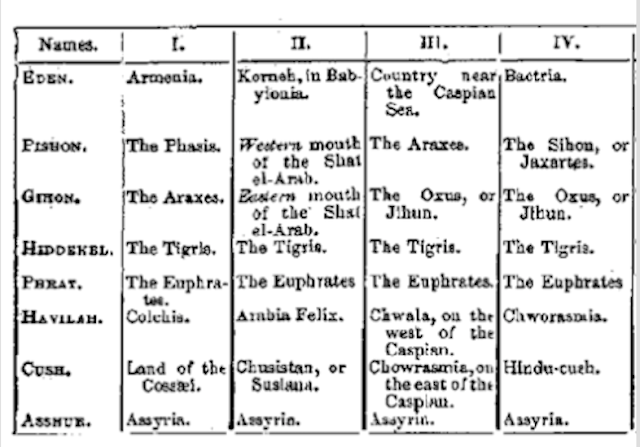 "The Gottingen professor, J.D. Michaelis, originated this hypothesis,.....Gatterer, in the main, agrees with him, only he understands the Hiddekel to be the Indus, and takes the Pishon for the Phasis. Cush is found by Michaelis in the name of the city Cath or Caths, the ancient capital of Chowrasmia, on the Oxus or Jihun, near the site of Balkh. He refers to Quint. Curtius as speaking of the Cusaei or Cusitani being in Bactria upon the Oxus. Wahl sees Cush in the Khousti of Moses of Chorene, meaning the large province between the Caspian and Persian Seas, as far as the Indus and Oxus. The land of Havilah Michaelis connects with the tribe of Chwaliski or Chwalisses, from whom the Russians call the Caspian Sea the Chwalinskoie...."...http://www.studylight.org/encyclopedia/mse/print.cgi?n=6061

"In addition to the region described in Genesis 2, two individuals named Havilah are listed in the Table of Nations which lists the descendants of Noah, who are considered eponymous ancestors of nations. They are mentioned in Genesis 10:7,29, 1 Chronicles 1:9,23. One is the son of Cush, the son of Ham; the other, a son of Joktan and descendant of Shem."

Shem (Hebrew: שֵם, Modern Shem Tiberian Šēm ; Greek: Σημ Sēm; Ge'ez: ሴም, Sēm; "renown; prosperity; name"; Arabic: سام Sām)....A text from the Islamic world claims that the Greeks derived from Shem: Tabari II:11 “Shem, the son of Noah was the father of the Arabs, the Persians, and the Greeks;...In the Chronicles of George the Monk and Symeon Logothetes, the following genealogy occurs: "To the lot of Shem fell the Orient, and his share extended lengthwise as far as India and breadthwise (from east to south) as far as Phinocorura, including Persia and Bactria,....Indo-Iranians: According to Abulgazi, Shem's original land was Iran while Japheth's was the country called "Kuttup Shamach," said to be the name of the regions between the Caspian Sea and India.” 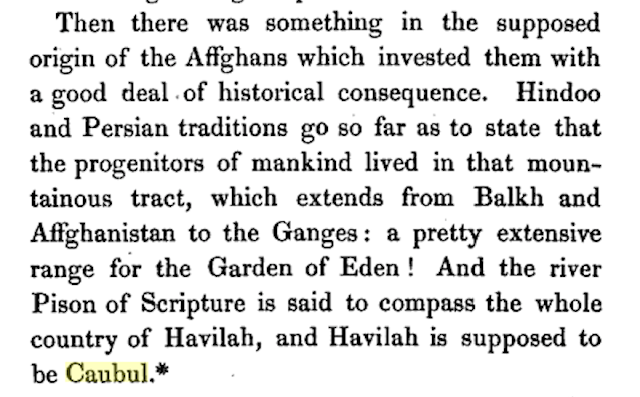 The Expedition Into Afghanistan: Notes and Sketches Descriptive of the Country By James Atkinson (1842) 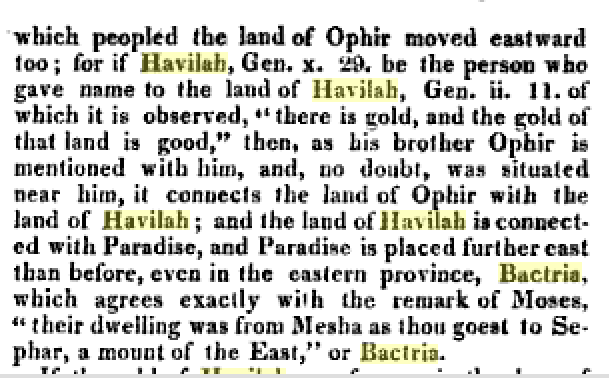 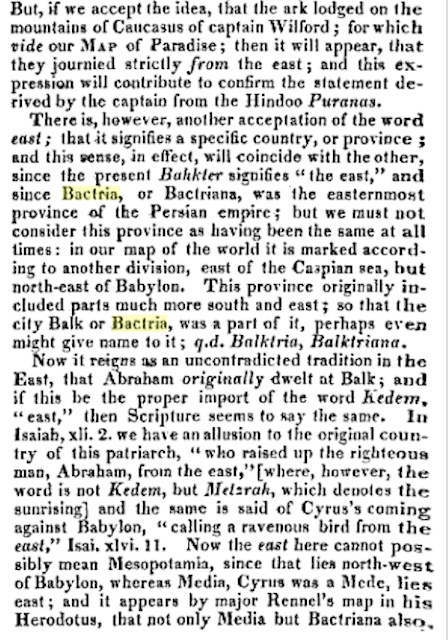 "The historian Josephus claimed that the Indians of India are descended from the sons of Joktan. Josephus explains that many Joktanites had settled in Afghanistan: "Now Joctan, one of the sons of Heber, had these sons, Elmodad, Saleph, Asermoth, Jera, Adoram, Aizel, Decla, Ebal, Abimael, Sabeus, Ophir, Euilat, and Jobab. These inhabited from Cophen [a river where Kabul is], an Indian river, and in part of Asia adjoining it. And this shall suffice concerning the sons of Shem."......This is modern Kabul and the valley of its river. The land further towards the Indus is Bactria. Thus, some of Joktan's descendants seemingly moved through the Arabian peninsula and went on to India. The part of Asia referred to here by Josephus is probably what is now Tajikistan—for its ancient capital was aciently known as Yotkan. Their having dwelt at one time in Afghanistan, leads to speculation that they were amongst the Aryans of northwestern India."..... Works of Flavius Josephus: Antiquities 1:6:4. 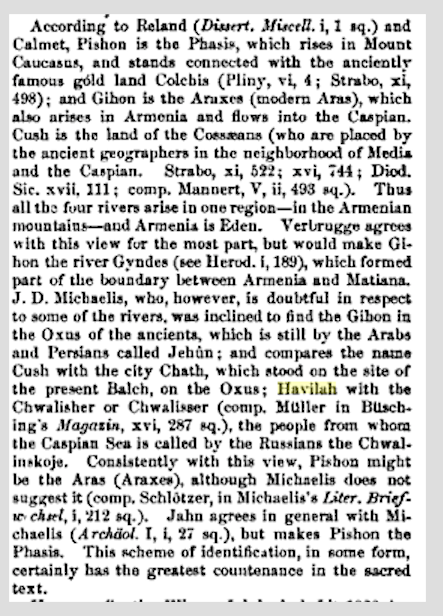 “And a river went out of Eden to water the garden; and from thence it was parted, and became into fur heads. The name of the first is Pison: that is it which compasses the whole land of Havilah, where there is gold; and the gold of that land is good: there is bdellium and the onyx stone. And the name of the second river is Gihon: the same is that compasseth the whole land of Ethiopia. And the name of the third river is Hiddekel: that is it which goeth toward the east of Assyria. And the fourth river is Euphrates.....Genesis, states that one river went out of Eden and divided into four heads.....Such a location of four rivers starting from one source we find on the Pamir plateau in Central Asia, between the Tian Shan mountains on the north and the Hindu Cush on the south. From the lakes of that plateau issue four great rivers: the Indus, the Jaxartes, the Oxus, and Tarim. The Oxus is still called by the natives the Dgihun or Ghon; the Chitral branch of the Indus answers the description of the Pison; the Jaxartes is the original Euphrates; and the Tarim going toward the east is in all probability the Hiddekel.".....http://israelect.com/reference/WillieMartin/The_Garden_of_Eden.htm

...“If we search to determine the country which best satisfies the geography of the first chapters of Genesis, it is necessary to avow that all conducts us to the region of the Imaus, where the most solid inductions place the cradle of the Human Race. There is found, as in the Paradise of Genesis, gold, precious stones, bdellium. This point is that of the world of which one is able to say with the most truth that four of rivers issue from the same source. Four immense currents of water: the Indus, the Helmend, the Oxus, and the Gaxarles, take there their rise, flowing in directions the most opposite. The second chapter of Genesis presents to us a traditional geography which has no connection with the ordinary geography of the Hebrews; but which, on the contrary, offers the most astounding resemblance with the Turanian system. The Pison, which issues from the Garden of Eden, situated in the East, is very probably the high Indus, and the country of Havilah, seems well to be the country of Darada towards Chachmises, celebrated for its riches. The Gihon is the Oxus, and it is without doubt by substitution of more modern names that we find the Tigri and Euphrates at the side of the other rivers indicated. Thus, all invites us to place the Eden of the Semites ate the point of the separation of the waters of Asia at the umbilici of the world, toward which, as with index finger, all the races seem to point as that recognized in their most primitive traditions.”.....Professor S.H. Buchanan on pages 125 and 126 of his work, The World and the Book, quotes the french Orientalist, M. Renan:.

" The Sumerians called themselves “the black headed people” and their land, in cuneiform script, was simply “the land” or “the land of the black headed people”. .....The region of Sumer was long thought to have been first inhabited around 4500 BCE.....The original homeland of the Sumerians is unknown. It is believed that they came from 'the east'....They entered Mesopotamia c. 4,000 B.C."