"Ilkhanid Buddhism: Traces of a Passage in Eurasian History.....Ilkhanid Buddhism, a political and cultural phenomenon of the Ilkhanate, had a sudden visible presence within the Eurasian world and then dissolved into morediffuse traces. The Ilkhans ruled Iran and neighboring territories from 1256-1335 AD as the grandsons and heirs of Chinggis Khan (1162-1227) and as subordinate regional rulers to the dominant Mongol Yuan Dynasty (1271-1368). Few scholars today would deny the pivotal and creative role played by the Mongol conquests despite their destructive and by some measures relatively short span of governance. Ilkhanid Buddhism also had a paradoxical existence, burning bright for a short time, seemingly disappearing under subsequent layers of Islamic and Eurocentric histories, and yet continuing to spin its traces through currents of intellectual life. What follows explores a political and cultural mapping of Ilkhanid Buddhism and the Eurasian discourse onBuddhism of which it was a part during a critical historical period."....ROXANN PRAZNIAK .....Robert D. Clark Honors College, History, University of Oregon...Comparative Studies in Society and History....2014 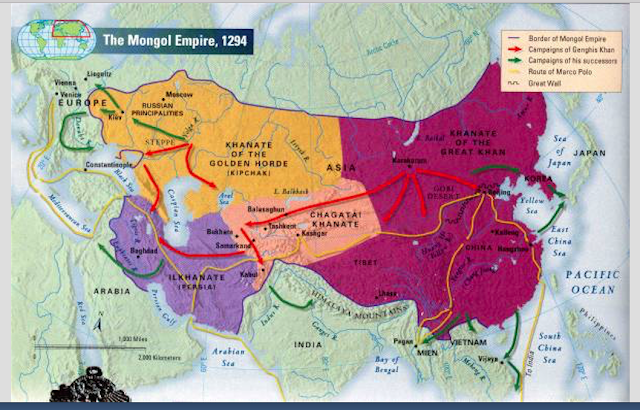 "The Ilkhanate, also spelled Il-khanate (Persian: ایلخانان‎, Ilkhanan; Mongolian: Хүлэгийн улс, Hulagu-yn Ulus), was a breakaway state of the Mongol Empire, which was ruled by the Mongol House of Hulagu. It was established in the 13th century and was based primarily in Persia as well as neighboring territories, such as present-day Azerbaijan, and the central and eastern parts of present-day Turkey. The Ilkhanate was based, originally, on Genghis Khan's campaigns in the Khwarazmian Empire in 1219–1224, and was founded by Genghis's grandson, Hulagu Khan. In its fullest extent, the state expanded into territories which today comprise most of Iran, Iraq, Turkmenistan, Armenia, Azerbaijan, Georgia, Turkey, western Afghanistan and southwestern Pakistan. The Ilkhanate initially embraced many religions, but was particularly sympathetic to Buddhism and Christianity...... Later Ilkhanate rulers, beginning with Ghazan in 1295, embraced Islam.".... 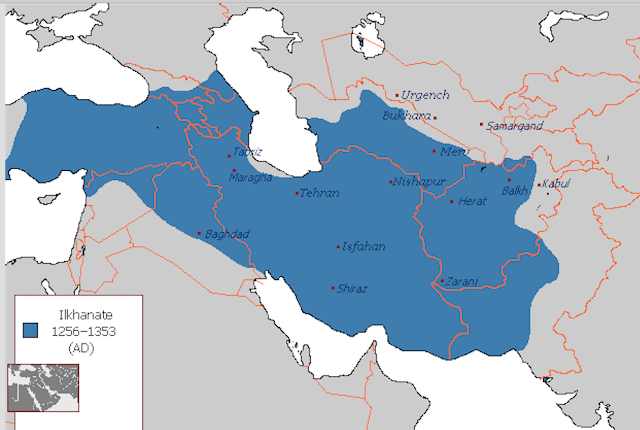 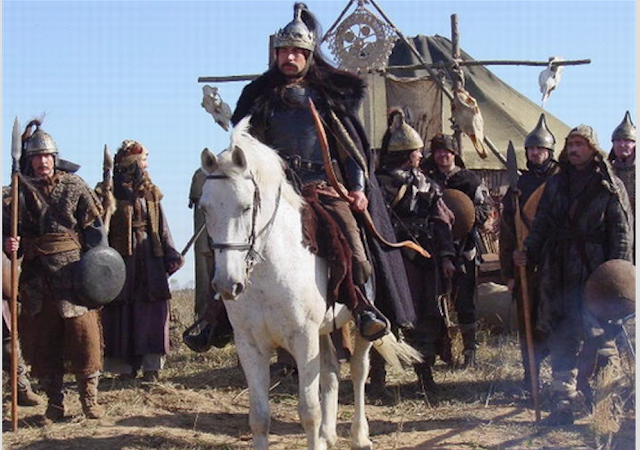 "...Hulagu humiliated the defeated Last Caliph Musta'sim, which was history’s ironical way of seeking retribution for the humiliation of the last Persian Emperor Yazdgard in the same city in 637 (then known as Ctesiphon) by the victorious Arab Muslims.... All the residents of Baghdad were slaughtered in cold blood. Howsoever, ghastly this act was, with this one act the Mongols repaid all the six hundred years of Muslim bloodshed. Nearly eighty thousand people in all were slaughtered in Baghdad in a matter of two days."....http://www.historyofjihad.org/mongolia.html

"The actual founder of the Ilkhanate dynasty was Hulagu Khan, grandson of Genghis Khan and brother of both Möngke Khan and Kublai Khan......In the period after Hulagu, the Ilkhans increasingly adopted Tibetan Buddhism. Christian powers were encouraged by what appeared to be a favoring of Nestorian Christianity by the Ilkhanate's rulers but this probably went no deeper than the Mongols' traditional even-handedness towards competing religions. Thus the Ilkhans were markedly out of step with the Muslim majority they ruled. Ghazan, shortly before he overthrew Baydu, converted to Islam and his official favoring of Islam as a state religion coincided with a marked attempt to bring the regime closer to the non-Mongol majority of the regions they ruled. Christian and Jewish subjects lost their equal status with Muslims and again had to pay the poll tax. Buddhists had the starker choice of conversion or expulsion.".....Medieval Persia 1040–1797, David Morgan p.72..... 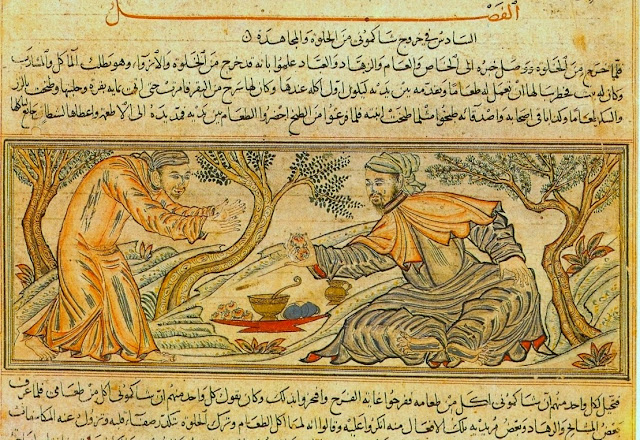 Buddha offers fruit to the devil, Khalili Collection from The Jāmiʿ al-tawārīkh....Since 1970, Nasser Khalili has assembled, under the auspices of the Khalili Family Trust, eight of the world's finest and most comprehensive art collections

"The Jāmiʿ al-tawārīkh, (Mongolian: Судрын чуулган, Sudar-yn Chuulgan; Arabic: جامع التواريخ ‎; Persian: جامع‌التواریخ ‎), ("Compendium of Chronicles") is a work of literature and history, produced by the Mongol Ilkhanate in Persia. Written by Rashid-al-Din Hamadani (1247–1318) at the start of the 14th century, the breadth of coverage of the work has caused it to be called "the first world history". It was in three volumes. The surviving portions total approximately 400 pages, with versions in Persian, Arabic, and Mongolian. The work describes cultures and major events in world history from China to Europe; in addition, it covers Mongol history, as a way of establishing their cultural legacy..... Approximately 20 illustrated copies were made of the work during Rashid al-Din's lifetime, but only a few portions remain, and the complete text has not survived.... Two Persian copies from the first generation of manuscripts survive in the Topkapi Palace Library in Istanbul. "

Atwood, Christopher P. (2004). The Encyclopedia of Mongolia and the Mongol Empire. 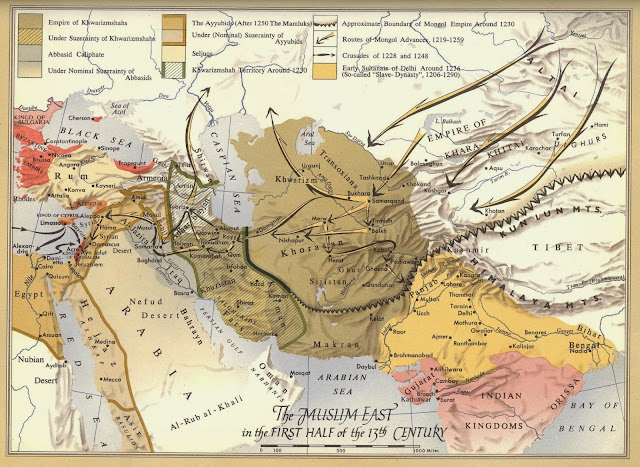 "..... a substantial proportion of men in the world are direct line descendants of Genghis Khan. By direct line, I mean that they carry Y chromosomes which seem to have come down from an individual who lived approximately 1,000 years ago. As Y chromosomes are only passed from father to son, that would mean that the Y is a record of one’s patrilineage. Genghis Khan died ~750 years ago, so assuming 25 years per generation, you get about 30 men between the present and that period. In more quantitative terms, ~10% of the men who reside within the borders of the Mongol Empire as it was at the death of Genghis Khan may carry his Y chromosome, and so ~0.5% of men in the world, about 16 million individuals alive today, do so.".....By Razib Khan | August 5, 2010 .....http://blogs.discovermagazine.com/gnxp/2010/08/1-in-200-men-direct-descendants-of-genghis-khan/#.VHcf24umNS8