"If we follow the scheme of the Eighteen Great Countries, and assume that ’Ol-mo-lung-ring is, as many later sources say, in some way identical with Stag-gzig, we see that Stag-gzig is to the west of Tibet, and is bordered by the smaller areas of Gilgit and Yavana (Bactria).".......Martin, Dan. (1999). "'Ol-mo-lung-ring, the Original Holy Place." In: Sacred Spaces and Powerful Places In Tibetan Culture: A Collection of Essays. (1999) 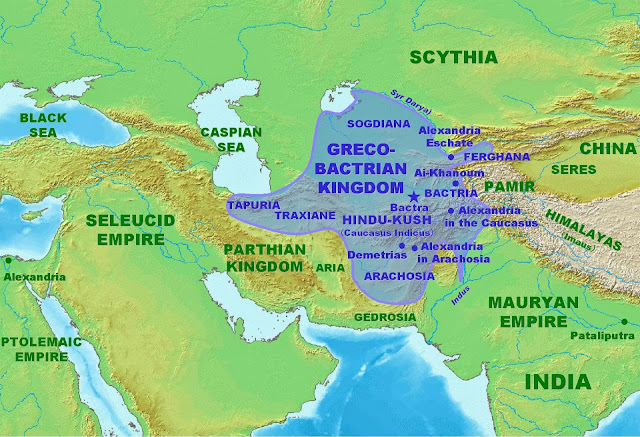 "The Yavanajātaka (Sanskrit: yavana 'Greek' + jātaka 'nativity' = 'nativity according to the Greeks') of Sphujidhvaja is an ancient text in Indian astrology......It is a later versification of an earlier translation into Sanskrit of a Greek text, thought to have been written around 120 BC in Alexandria, on horoscopy. The original translation, made in 149–150 CE by "Yavanesvara" ("Lord of the Greeks") under the rule of the Western Kshatrapa king Rudrakarman I, is lost. Only a substantial portion of the versification 120 years later by Sphujidhvaja under Rudrasena II has survived......Yavanajataka is the earliest known Sanskrit work referencing western horoscopy. It was followed by other works of Western origin which greatly influenced Indian astrology: the Paulisa Siddhanta ("Doctrine of Paul"), and the Romaka Siddhanta ("Doctrine of the Romans"). However the earliest known sanskrit work on horoscopy is Vedanga Jyotisha....It was translated by David Pingree into English, which was published as volume 48 of the Harvard Oriental Series in 1978.".....David Pingree, "Jyotiḥśāstra", Jan Gonda (ed) A History of Indian Literature, Vol, VI Fasc. 4, Otto Harrassowitz — Wiesbaden, 1981

"The Yavanajataka is the earliest surviving Sanskrit text in horoscopy....himself quoting David Pingree "The Yavanajataka of Sphujidhvaja" p5).....The last verses of the Yavanajātaka text describe the role of Yavanasvera in the creation of the text, and the role of Sphujidhvaja in its subsequent versification:......."Previously Yavanesvara (the lord of the Greeks), whose vision of the truth came by favor of the Sun and whose language is flawless, translated this ocean of words, this jewel-mine of horoscopy, which was guarded by its being written in his tongue (i.e., Greek), but the truth of which was seen by the foremost of kings in the year 71 of the Saka era;...... (he translated) this science of genethlialogy for the instruction of the world by means of excellent words." (Chapter 79/60-61 The Yavanajataka of Sphujidhvaja)......There was a wise king named Sphujidhvaja who versified this entire (text), which was seen by him in the year 191, in 4,000 indravajra verses." (Chapter 79/62 The Yavanajataka of Sphujidhvaja)........The dates employed in the Yavanajataka are based on the Saka era (see Chapter 79/14 "When 66 years of the Sakas have elapsed..."), meaning that the translation of the text into Sanskrit was made by Yavanasvera in 149 CE (year 71 of the Saka era, which starts in 78 AD). Accordingly, the versification by Sphujidhvaja was made in 269 CE."....."The shape of ancient thought", Page 385....Thomas McEvilley

"The present Yavanajataka of Sphujidhvaja was written in 269 CE based on the Yavanajataka of Yavanasvera written in 149 CE. There was a Eurocentric professor named David Pingree who has translated and written a vast commentary on the text. Pingree believed astrology came from Greece to India and worked very hard to promote his view."....http://svatantranatha.blogspot.com/2014/04/yavanajataka.html

"Kālabala: "This system is not referred to in any Greek or Latin works; nor …"...... kāla bala (temporal strength)..... kālabala.... कालबल ..... kaalabala......Temporal strength of planets used in Shad bala .....seasonal diseases (kālabala).....Shadbala, measuring planetary strength in Jyotish / Vedic Astrology....The Sun, Jupiter and Venus are powerful during noon and are powerless during midnight.....

"Yavana or Yona is a community in Hindu mythology. They are grouped under western countries along with Sindhu, Madra, Kekeya, Gandhara and Kamboja as per the descriptions in the epic Mahabharata. This word is also used in Indian history to indicate Greeks and later Arabs from 7th century AD."

"Manjushri Yashas (Tib. Rigdan Tagpa) is said to have been born in 159 BC and ruled over a kingdom of 300,510 followers of the Mlechha (Yavana or "western") religion, some of whom worshipped the sun. He is said to have expelled all the heretics from his dominions but later, after hearing their petitions, allowed them to return. For their benefit, and the benefit of all living beings, he explained the Kalachakra teachings. In 59 BC he abdicated his throne to his son, Puṇdaŕika, and died soon afterwards, entering the Sambhoga-káya of Buddhahood.".... Das, Sarat Chandra (1882). Contributions on the Religion and History of Tibet, in Journal of the Asiatic Society of Bengal

"The earliest mathematical astronomy that developed in territory under Iranian control was that which originated in Mesopotamia, was improved during the Achaemenid period, and culminated in the Babylonian solar, lunar, and planetary theories of the Seleucid and Parthian periods. That some of this Babylonian astronomy and the astral omen literature that was associated with it was adopted by scholars in Iran itself is implied by its transmission to India in the late fifth or early fourth century B.C.....In the Parthian period, however, we do find evidence from eastern Iran that Babylonian mathematical astronomy and astral omens continued to be studied and that Indian concepts had begun to be influential.... planetary omens reported by the Chinese historian Ssŭ-ma Chien (ca. 100 B.C.) and of the structure of Early Han planetary theory; both the omens and the theory seem to have originated in Mesopotamia. The evidence for the second hypothesis is found in the Buddhist Sanskrit texts of which manuscripts were preserved in Central Asia or which were translated into Chinese or into Central Asian languages in the second century A.D. and later."....http://www.iranicaonline.org/articles/astrology-and-astronomy-in-iran-

"Abū Maʿšar (171-272/787-886) came to Baghdad from Balḵh, Bactria, and began the practice of astrology there in the 820s. In his Ketāb al-olūf and Zīǰ al-hazārāt, written between 226/840 AD, he combined the Indian, Sasanian, and Greek astronomical traditions to which Islam was heir, and attributed the resulting amalgamation of disparate elements to an antediluvian Persian text that he claimed to have been written in the reign of Ṭahmūraṯ."....http://www.iranicaonline.org

"Since David Pingree’s edition and translation of the Sphujidhvaja’s Yavana- jātaka in 1978, the text has established itself as one of the most important historical documents in various fields of Indology...The Yavanajātaka was an astrological/astronomical work composed by Sphujidhvaja, an “Indianized Greek” who lived in the realm of the Western Kṣatrapas....The work was a versification of a prose original in Greek composed by Yavaneśvara in Alexandria ... The work, though highly corrupted and clumsily expressed, contains algorithms of “ultimately Babylonian origin” and the earliest reference to the decimal place-value with a symbol for zero (bindu)....,there is no evidence of the existence of a Greek text in prose from which Sphujidhvaja versified, as Pingree claimed......To sum up, the most we can say in the absence of further evidence is that the Yavanajātaka is an early Indian jyotiṣa text which incorporated elements of Greek astrology and astronomy. "....'The Date and Nature of Sphujidhvaja’s Yavanajātaka Reconsidered in the Light of Some Newly Discovered Materials' by Bill M. Mak...Kyoto University