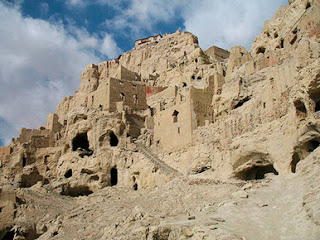 Garuda Valley or Khyunglung (Tibetan name) is an amazing complex of caves set in the hills on the north bank of the Sutlej River about 35 km west of the hotsprings and gompa of Tirthapuri ....... There are further ancient ruins on the hilltops above the Bon monastery of Gurugem/Gurugyam which are only 6 km from Tirthapuri. There is a very little published about these sites and virtually no archaeological investigations have been carried out......Many of the cave are filled with ancient artifacts dating back to the time of the Zhangzhung. These artifacts include small stones inscribed with ancient Tibetan script, stone statues of Bon deities, and various vases and pots......Kyunglung was never a city as such, but more of a "convention centre for Bonpo magicians" and that the caves were used for ceremonial purposes during times when the clans gathered. Possible camping grounds for the main retinue would be around the modern village of Khyunglung a few kilometres upstream where the valley is somewhat broader or the area between Gurugem and Tirthapuri which is still heavily used by yak and sheep herding nomads today.".....http://www.advzambuling.com/Garuda_Valley.php 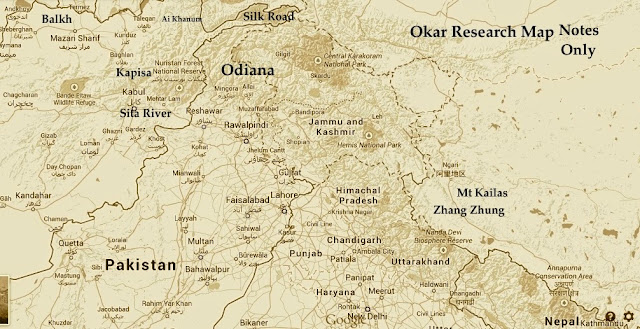 "The Upper Sutlej Valley was once known as the Garuda Valley by the Zhang Zhung, the ancient civilization of western Tibet. The Garuda Valley was the centre of their empire which stretched many miles into the nearby Himalayas. The Zhang Zhung built a towering palace in the Upper Sutlej Valley called Kyunglung, the ruins of which still exist today nearby to the village of Moincer, southwest of Mount Kailash (Mount Ti-se) Eventually the Zhang Zhung were conquered by the Tibetan Empire.".....http://en.wikipedia.org/wiki/Sutlej

"....... the name of the village where the caves are located, Kyunglung, translates as "Garuda Valley." ......the "silver palace in the Garuda Valley," the palace of the last Shang Shung kings -- a place scientists had previously thought was nothing more than an imaginary Atlantis in the Himalayas....... in the diaries of Italian Tibet researcher Giuseppe Tucci, during a trip through western Tibet in 1935, Tucci pitched his tent in the Kyunglung valley.....During the 1960s, Tucci invited the still young Tibetan Lama Chogyal Namkhai Norbu to his institute in Rome. Today, Namkhai Norbu is not only considered one of the world's most important teachers of Buddhism, but also one of the leading experts on the Shang Shung dynasty and the Bon religion......The Bonpos were the high priests in the "silver palace of the Garuda Valley.".....http://www.spiegel.de/international/spiegel/tibet-s-lost-city-atlantis-in-the-himalayas-a-413526.html

"In 1908, French orientalist Paul Pelliot found a letter in a hidden chamber in the "cave library" of Dunhuang that described life at the Shang Shung court. In the document, Queen Sadmarkar describes the great riches in the palace, which she calls the "Kyunglung Ngulkar Karpo" (Silver Palace in the Garuda Valley). The palace contained hundreds of rooms, and its walls, she writes, were studded with gold and agate."...."The Silver Palace of Garuda: The Discovery of Tibet's Last Secret," by Bruno Baumann 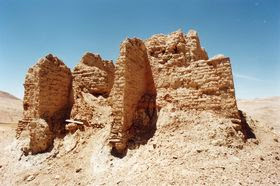 "Kharngön Gönpa.......The most distinctive ruin in the vicinity of the fortress is Kharngön Gönpa (Blue Castle monastery) (4340 m), an adobe-block (mud-brick) building whose four walls are oriented in the cardinal directions (10 m by 11m). Attaining a maximum height of 6 m, this structure represents a prominent landmark. Its ground plan consists of a large central room surrounded on all sides by a 1.5 m wide passageway. The entrance to the building was in the east. According to local elders, this was a Buddhist temple built before the Horned Eagle Valley Silver Castle monastery, located on the opposite bank of the Sutlej, in Yülmé. Smaller adobe ruins are also found in the Kharngön Gönpa area. Between the Blue Castle fortress and Blue Castle monastery there are two small outcrops, each with two or three caves."......http://www.thlib.org/bellezza/#!book=/bellezza/wb/b1-1-9/

"According to Bön literary sources, there were three Zhang Zhung citadels in the vicinity of Khyunglung. Bellezza, Antiquities of Upper Tibet, 39–43."