"...Magi (/ˈmeɪdʒaɪ/; Latin plural of magus; Ancient Greek: μάγος magos; Old Persian: maguš, Persian: مُغ‎ mogh; English singular magian, mage, magus, magusian, magusaean; Kurdish: manji) is a term, used since at least the 6th century BC, to denote followers of Mazdaism or Zoroaster. The earliest known usage of the word Magi is in the trilingual inscription written by Darius the Great, known as the Behistun Inscription.".......http://en.wikipedia.org/wiki/Magi 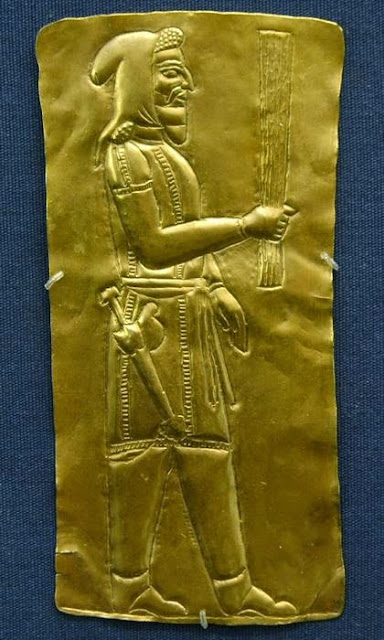 In Persian sources…..The Avestan word 'magâunô', i.e. the religious caste of the Medes into which Zoroaster was born, (see Yasna 33.7:' ýâ sruyê parê magâunô ' = ' so I can be heard beyond Magi '), seems to be the origin of the term. The term only appears twice in Iranian texts from before the 6th century BC, and only one of these can be dated with precision. This one instance occurs in the trilingual Behistun inscription of Darius the Great, and which can be dated to about 520 BC. In this trilingual text, certain rebels have 'magian' as an attribute; in the Old Persian portion as maγu- (generally assumed to be a loan word from Median). The meaning of the term in this context is uncertain. The other instance appears in the texts of the Avesta, i.e. in the sacred literature of Zoroastrianism. In this instance, which is in the Younger Avestan portion, the term appears in the hapax moghu.tbiš, meaning "hostile to the moghu", where moghu does not (as was previously thought) mean "magus", but rather "a member of the tribe" or referred to a particular social class in the proto-Iranian language and then continued to do so in Avestan. An unrelated term, but previously assumed to be related, appears in the older Gathic Avestan language texts. This word, adjectival magavan meaning "possessing maga-", was once the premise that Avestan maga- and Median (i.e. Old Persian) magu- were co-eval (and also that both these were cognates of Vedic Sanskrit magha-). While "in the Gathas the word seems to mean both the teaching of Zoroaster and the community that accepted that teaching," and it seems that Avestan maga- is related to Sanskrit magha-, "there is no reason to suppose that the western Iranian form magu (Magus) has exactly the same meaning" as well. But it "may be, however," that Avestan moghu (which is not the same as Avestan maga-) "and Medean magu were the same word in origin, a common Iranian term for 'member of the tribe' having developed among the Medes the special sense of 'member of the (priestly) tribe', hence a priest."…..http://en.wikipedia.org/wiki/Magi

"DISCOVERING MAGIC......Any perception can connect us to reality properly and fully. What we see doesn't have to be pretty, particularly; we can appreciate anything that ex-ists. There is some principle of magic in everything, some living quality. Something living, something real, is taking place in everything."......http://shambhala-training.eu/

"The goal of warriorship is to reconnect to the nowness of reality, so that you can go forward without destroying simplicity, without destroying your connection to this earth. In the last chapter, we discussed the importance of nowness as a way of joining together the wisdom of the past with the challenge of the present. In this chapter, we are going to discuss how to discover the ground of nowness. In order to rediscover nowness, you have to look back, back to where you came from, back to the original state. In this case, looking back is not looking back in time, going back several thousand years. It is looking back into your own mind, to before history began, before thinking began, before thought ever occurred. When you are in contact with this original ground, then you are never confused by the illusions of past and future. You are able to rest continuously in nowness.".......http://shambhala-training.eu/

"Old Persian texts, pre-dating the Hellenistic period, refer to a Magus as a Mazdaic..... The word Ahura means light and Mazda means wisdom. Thus Ahura Mazda is the lord of light and wisdom."......http://en.wikipedia.org/wiki/Ahura_Mazda

"...So meditation practice brings out the supernatural, if I may use that word. You do not see ghosts or become telepathic, but your perceptions become super-natural, simply super-natural."......http://shambhala-training.eu/

"...Georges Dumézil's "tripartite ideology." .....This theory states that Indo-European culture (and, by extension, PIE culture) was divided up into three groups, which Dumezil calls "functions." The first function is the magical-religious one. This consists of the priests and the rulers. The second function is that of the warrior. The third is that of the producers. Shan M. M. Winn has summed it up nicely in a book title: "Heaven, Heroes, and Happiness.".....http://www.ceisiwrserith.com/pier/whatwasideology.htm

"...When we draw down the power and depth of vastness into a single perception, then we are discovering and invoking magic. By magic we do not mean unnatural power over the phenomenal world, but rather the discovery of innate or primordial wisdom in the world as it is. The wisdom we are discovering is wisdom without beginning, something naturally wise, the wisdom of the cosmic mirror. In Tibetan, this magical quality of existence, or natural wisdom, is called drala. Dra means "enemy" or "opponent" and la means "above." So drala literally means "above the enemy," "beyond the enemy." Drala is the unconditioned wisdom and power of the world that are beyond any dualism; therefore drala is above any enemy or conflict. It is wisdom beyond aggression. It is the self-existing wisdom and power of the cosmic mirror that are reflected both in us and in our world of perception."......http://shambhala-training.eu/

"....There are a number of possible reasons for such a smallnumber of Manichaean magical texts to survive relative to the sizable corpus of the PGM and PDM in the Egyptian context, and the ubiquity of Buddhist formulas in Central Asia.".....The Art and Ritual of Manichaean Magic: Text, Object and Image from the Mediterranean to Central Asia.....by Matthew Canepa

"....meeting the "dralas." The dralas are the elements of reality-water of water, fire of fire, earth of earth-anything that connects you with the elemental quality of reality, anything that reminds you of the depth of perception. There are dralas in the rocks or the trees or the mountains or a snowflake or a clod of dirt. Whatever is there, whatever you come across in your life, those are the dralas of reality. When you make that connection with the elemental quality of the world, you are meeting dralas on the spot; at that point, you are meeting them. That is the basic existence of which all human beings are capable. We always have possibilities of discovering magic. Whether it is medieval times or the twentieth century, the possibility of magic is always there."......http://shambhala-training.eu/

"...Drala energy is like the sun. If you look in the sky, the sun is there. By looking at it, you don't produce a new sun. You may feel that you created or made today's sun by looking at it, but the sun is eternally there. When you discover the sun in the sky, you begin to communicate with it. Your eyes begin to relate with the light of the sun. In the same way, drala principle is always there. Whether you care to communicate with it or not, the magical strength and wisdom of reality are always there. That wisdom abides in the cosmic mirror. By relaxing the mind, you can reconnect with that primordial, original ground, which is completely pure and simple. Out of that, through the medium of your perceptions, you can discover magic, or drala."......http://shambhala-training.eu/