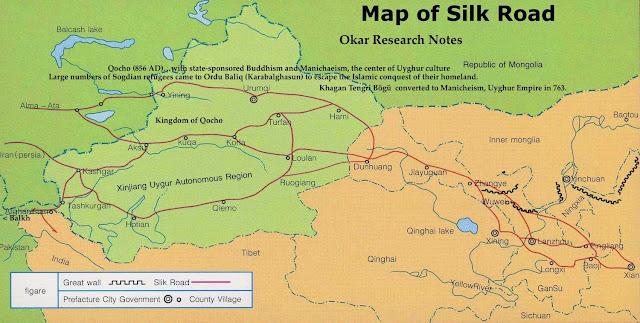 "Gaochang (Chinese: 高昌; pinyin: Gāochāng), also called Qara-hoja or Kara-Khoja (قاراھوجا in Uyghur), is the site of an ancient oasis city built on the northern rim of the inhospitable Taklamakan Desert in Xinjiang, China. The site is also known in published reports as Chotscho, Khocho, Qocho, or Qočo. During the Yuan and Ming dynasties, Gaochang was referred to as "Halahezhuo" (哈拉和卓) (Qara-khoja) and Huozhou....It was destroyed in wars during the 14th century, and old palace ruins and inside and outside cities can still be seen today. The ruins are located 30 km southeast of modern Turpan.".....http://en.wikipedia.org/wiki/Gaochang

"Uyghur Kingdom of Qocho......After 840 it then became occupied by Uyghurs fleeing Kirghiz invasion of their land. The Uyghurs established the Kingdom of Qocho (Kara-Khoja) in 850. The inhabitants of Qocho practiced Buddhism, Manichaeism and Nestorian Christianity. The Uyghurs converted to Buddhism and sponsored building of temple caves in the nearby Bezeklik Thousand Buddha Caves where depictions of Uyghur sponsors may be seen. The Buddisht Uyghur kings, who called themselves idiquts, retained their nomadic lifestyle, residing in Qocho during the winter, but moved to the cooler Bishbalik near Urumchi in the summer.".....Svatopluk Soucek (2000). "Chapter 4 - The Uighur Kingdom of Qocho". A history of Inner Asia. Cambridge University Press. ISBN 0-521-65704-0.

"...Large numbers of Sogdian refugees came to Ordu Baliq (Karabalghasun) to escape the Islamic conquest of their homeland. They converted the Uyghur nobility from Buddhism to Manichaeism. Thus, the Uyghurs inherited the legacy of Sogdian Culture. Sogdians ran the civil administration of the empire. They were helpful in outflanking the Chinese diplomatic policies which had destabilized the Göktürk Khaganate. In AD 840, following a famine and civil war, the Uyghur Khaganate was overrun by the Kirghiz, another Turkic people. As a result the majority of tribal groups formerly under Uyghur control migrated to what is now northwestern China, especially to the modern Xinjiang Uyghur Autonomous region.".....http://en.wikipedia.org/wiki/History_of_the_Uyghur_people

"Some Uyghur scholars claim modern Uyghurs descent from both the Turkic Uyghurs and the pre-Turkic Tocharians (Yuezhi), and relatively fair hair and eyes, as well as other so-called 'Caucasoid' physical traits, are not uncommon among Uyghurs. Genetic analyses suugest West Eurasian ("Caucasoid") maternal contribution to Uyghurs is 42.6%. The estimation of European component in modern Uyghur population ranged from 30 to 60%."....http://en.wikipedia.org/wiki/History_of_Xinjiang[11]

"Khagan Tengri Bögü met with Manichaean priests from Iran while on campaign and was converted to Manicheism, adopting it as the official religion of the Uyghur Empire in 763. One effect of this conversion was the increased influence of the Sogdians in the Uyghur court. About 779 AD ..... Tun Bagha Tarkhan ascended the throne with the title Alp Qutlugh Bilge ("Victorious, glorious, wise")".....http://en.wikipedia.org/wiki/Uyghur_Khaganate