"The Guhyasamāja Tantra (Sanskrit; Tantra of the Secret Community) is one of the most important scriptures of Esoteric Buddhism.....According to one tradition, the Guhyasamāja Tantra was taught for the first time by the Buddha in the form of Vajradhara to Indrabhuti the King of Oddiyana, also called King Dza..... It survives in Sanskrit manuscripts and in Tibetan and Chinese translation..".....http://en.wikipedia.org/wiki/Guhyasamāja_tantra 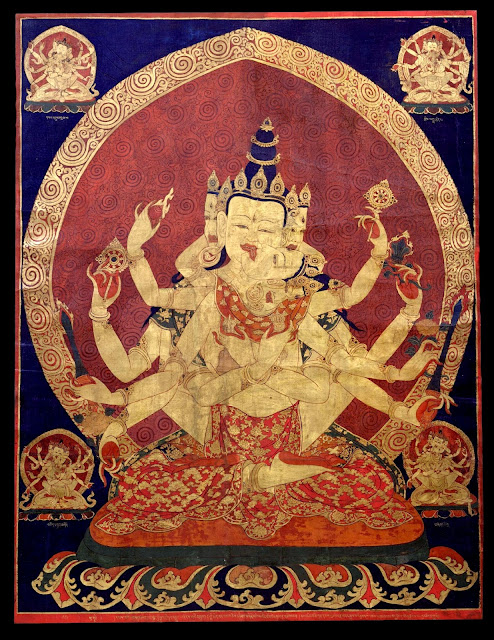 Thangka of Guhyasamaja in union with his consort Sparshavajrā, 17th century, Rubin Museum of Art.

sangwa-dupa....."According to the Tibetan Buddhist tradition, Buddha Shakyamuni taught the tantric approach, or Vajrayana including the use of deity practices, in a fourth Turning of the Wheel. In particular, he transmitted the Kalachakra and/or Guhyasamaja tantras. The Guhyasamaja (Tib. sangwa-dupa) which focuses on the primordial buddha Akshobya is believed to be one of the first Sanskrit works to be translated into Tibetan. Holding a vajra, bell, wheel, jewel, lotus and sword, this deity symbolizes the essential unity of all buddhas."....http://www.abuddhistlibrary.com

Indrabhuti (alternatively King Ja) is a name attributed to a number of individuals that have become conflated in the esoteric Buddhadharma tradition of Mantrayana.....http://en.wikipedia.org/wiki/Indrabhuti

" P. C. Bagchi states that there are two distinct series of names in Tibetan: (1) O-rgyān, U-rgyān, O-ḍi-yā-na, and (2) O-ḍi-vi-śā, with the first series connected with Indrabhūti, i.e., Oḍiyăna and Uḍḍiyāna, while the second series falls back on Oḍi and Oḍiviśa, i.e., Uḍra (Orissa) and has nothing to do with Indrabhūti. N.K. Sahu objects, however, and points out that these two sets of names are seldom distinguished in Buddhist Tantra literature, and opines that the words Oḍa, Oḍra, Uḍra, Oḍiviśa and Oḍiyāna are all used as variants of Uḍḍiyāna. In the Sādhanamālā, he further points out, Uḍḍiyāna is also spelt as Oḍrayāna while in the Kālikā Purāṇa, as indicated earlier, it is spelt either Uḍḍiyāna or Oḍra. There is also evidence, Sahu continues, that Indrabhūti is the king of Orissa rather than of the Swāt valley. The Caturāsiti-siddha-Pravṛtti, for example, mentions him as the king of Oḍiviśa while Cordier, in his Bṣtān-ḥgyur catalogue, gives sufficient indications of his being the king of Orissa. Also, in his famous work Jñānasiddhi, king Indrabhūti opens it with an invocation to Lord Jagannātha, a deity intimately associated with Orissa and with no other area of India".....http://en.wikipedia.org/wiki/Indrabhuti

"King Ja, receiver of gifts from the sky......According to Nyingma tradition, King Ja (also known as Indrabhuti) taught himself intuitively from "the Book" of the Tantric Way of Secret Mantra (that is Mantrayana) that magically fell from the sky along with other sacred objects and relics "upon the roof of King Ja" according to Dudjom (1904–1987), et al. (1991: p. 613 History) this happened on the Tibetan calendar year of the Earth Monkey, which Dudjom et al. identify as 853 BC[E]. King Ja taught Kukuraja, the "Dog King", from "the Book."This date of 853 BC[E] is problematic as it puts the event prior to the dates of the historical Buddha Shakyamuni circa 500 BCE as well as prior to the emergence of Tantra in any of its historical permutations according to modern Western peer-reviewed scholarship bar the lineages of the Bonpo (the dates are according to Bonpo tradition which are contended with) which not 'officially' tantric have many elements akin to tantra traditions.".....http://en.wikipedia.org/wiki/Indrabhuti 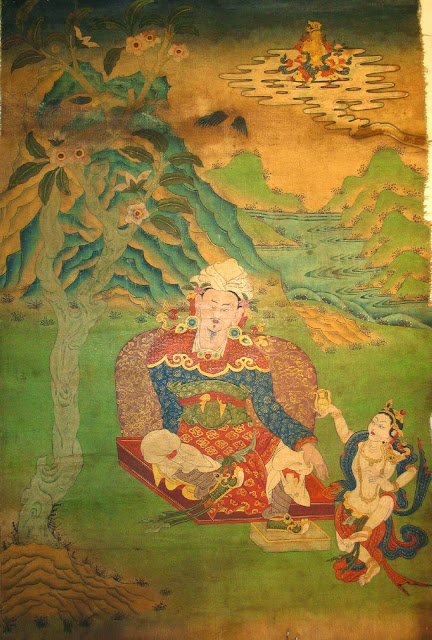