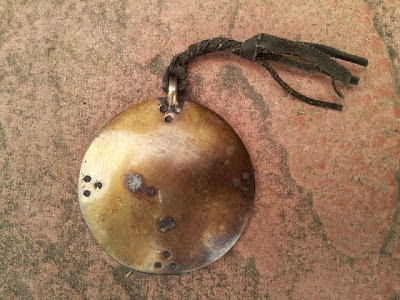 "Melong is a Tibetan term that means "mirror", "looking glass"....Mirror (Sanskr. ādarśa, darpaṇa; Tib. me long).......The mirror is an ancient symbol throughout Indian religions. In Indian iconography it may be understood as a symbol for clarity, wholesome or complete perception and 'primordial purity' (Tibetan: ka dag) of the mindstream or consciousness. The mirror is often depicted as an accoutrement of the hagiographical signification of fully realised Mahasiddha, Dzogchenpa and Mahamudra sadhaka. The mirror may be understood as a quality of the mindstream that denotes perceiving experience as it is without obscuration forded by klesha, etc........As the mirror, so the mind. The mirror as the mind, following Yogacara, reflects quality and form, though is not directly altered and is 'beyond all attributes and form'.........The mirror motif is employed pervasively throughout Buddhist literature but it is very important to traditions of Dzoghcen."......http://en.wikipedia.org/wiki/Melong 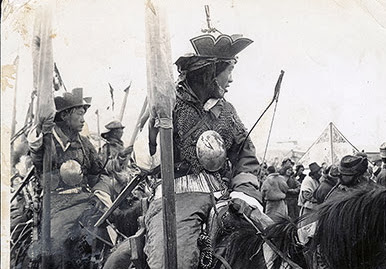 "Bronze mirrors were widespread in use before the advent of mirror glass. In Tibet and other countries they are still used for divination, such as ‘ta’. The concave surface is sometimes decorated and the convex outer surface is polished and mostly plain. Melongs were traditionally made with 5 Metals: copper, tin, zinc, iron and a fifth metal which may be gold, silver or ‘meteorite iron’.......The Melong used in Tibet is frequently plain on the concave side and on the convex side has a pattern of dots or circles. There are usually 4 sets of 3 dots at each quarter (top, bottom, left and right) which may represent some of the sets of 3 used in Dzogchen, a practice within both Bon and Buddhism......

....Arrows like this are also used in Soul Retrieval ceremonies by Tibetan shamans.....A small simple brass shaman's mirror (toli) is tied to the arrow, together with several peices of silk and other material. The head of the arrow is hand made of iron. The flight feathers are from a large bird which might be vulture as this is a traditional feather to use."......http://www.3worlds.co.uk/Pages/Gallery-Archive.html

Shamar Rinpoché speaks about Chögyam Trungpa Rinpoché’s divination - 1973.......Trungpa Rinpoché sent me this eight-point prediction letter in 1973. He wrote it in his own hand, as he was young and able at that time. Rinpoché asked his personal deity for a pramana prediction concerning my activity. During the rituals called létsok, or activity practices, a deity is invoked - a yidam or Dharma protector - and highly accomplished practitioners can ask them questions. Their answers appear in a mirror. Trungpa Rinpoché’s deity for this practice was the deity Lhamo Youdrönma, Goddess of the Turquoise Lamp. Rinpoché copied her answers from the mirror and sent them to me via Aché Tséphel, the secretary of the 16th Karmapa. I still have this letter. - Shamar Rinpoché, June 2010"........http://www.shamarpa.org 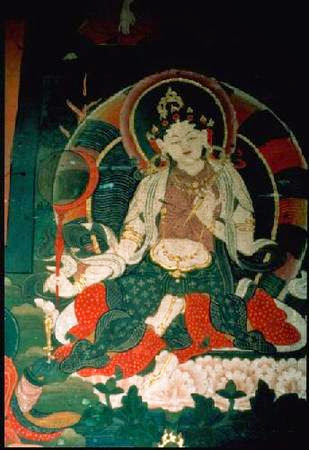 "In 1959, I left my monastery with my family and a group of monastics. It was a difficult journey, because we could not travel on the established routes, which were being watched closely by the Chinese. I devised our escape route through gorges and mountains, based mostly on Gesar prophecy and arrow divinations. During our escape, Trungpa Rinpoche and I met at Nyewo and conferred to confirm the safety of our route. Trungpa Rinpoche used mirror divination, and I used arrow divination, but the results were nearly the same. We decided to follow the route through Trakke, which has very harsh terrain and difficult gorges to pass through.......Trungpa Rinpoche and I met again on the plateau of Rigong-kha and consulted with one another. We thought about joining our two groups, but decided against it. Since I was leading a group of about a hundred people and Trungpa Rinpoche had an equal number or more, traveling together would have been very difficult and dangerous. However, Rinpoche’s mirror divination indicated that we would arrive safely in India, no matter which route we took."......Namkha Drimed Rinpoche......http://nalandatranslation.org/projects/articles/gesar-supplication/ 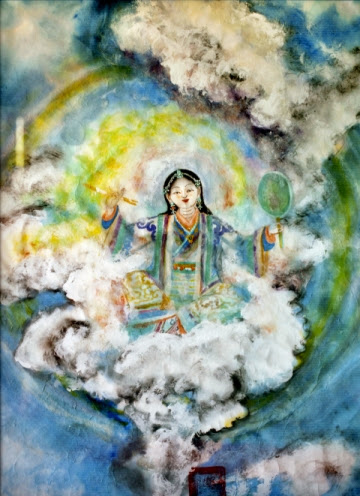 "According to legend, Amaterasu bequeathed to her descendant Ninigi the mirror, Yata no Kagami; the jewel, Yasakani no Magatama, and the sword, Kusanagi-no-Tsurugi. This sacred mirror, jewel, and sword collectively became the three Imperial Regalia of Japan.....Worshipping the Sun Goddess......The Ise Shrine located in Honshū, Japan houses the inner shrine, Naiku dedicated to Amaterasu. Her sacred mirror, Yata no Kagami is said to be kept at this shrine as one of the Imperial Regalia of Japan. At this shrine, a ceremony known as Shikinen Sengu is held every 20 years to honor Amaterasu. The main shrine buildings are destroyed and rebuilt at a location adjacent to the site. New clothing and food is then offered to the goddess. This practice is a part of the Shinto faith and has been practiced since the 690s.".......http://en.wikipedia.org/wiki/Amaterasu

BAGUA MIRRORS...... Mirrors alter space by eliminating the dimension of distance. Mirrors are associated with water and the moon. Mirrors are visual echoes, connecting past to present and the conscious to the unconscious. MIrrors are believed to transform negative chi into positive chi, hence promoting harmony (negative chi is called sha). Mirrors are believed to expel negative energy, evil, bad spirits, since negative energy would be reflected backwards, evil spirit would be frightened by their own appearance when looking into the mirror and hence would disappear. Concave mirrors are supposed to absorb negative energy, while convex mirrors are supposed to reflect negative energy. The ba gua functions as a force field around the flow of chi to and from the mirror.
Around 500 BC, mirrors were attached on people’s clothing for above mentioned reason.
Generally, there are three types of ba gua mirrors:
1) Octagon shaped wood/ material with a small round mirror in the middle; bright colours of green (symbolising spring, vigour, creativity), red (symbolising summer, illumination, growth) and goldish yellow (symbolising productiveness, success, late summer, autumn) stretch from the outer end of the mirror to the outer end of the octagon wood/ material.
2) Octagon shaped mirror framed by wood, glass will most likely cover the mirror. A Yin-Yang sign is painted in the middle, the ba gua are painted around the Yin- Yang sign in four colours: blue, green, red, and yellow.
3) A combination of a bagua mirror and door gods. Usually these are made of wood containing a mask like portrait of a protector or god, at times with an symbolistic animal. The protector or god holds a staff to ward off evil and at times a plaque declaring good fortune to those residing there. Above the scene is a regular ba gua mirror.