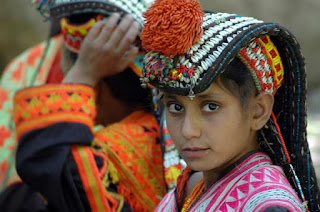 Chitral (Urdu: چترال‎, Khowar: چھترار; also known as Chetrar), translated as field in the native language Khowar, is the capital of the Chitral District, situated on the western bank of the Kunar River (also called Chitral River), in Khyber Pakhtunkhwa, Pakistan. The town is at the foot of Tirich Mir, the highest peak of the Hindu Kush, 25,289 ft (7,708 m) high....Chitral has a dry Mediterranean climate ...Chitral is also known for the famous Kalash tribe polytheist native inhabitants that ruled the region for centuries 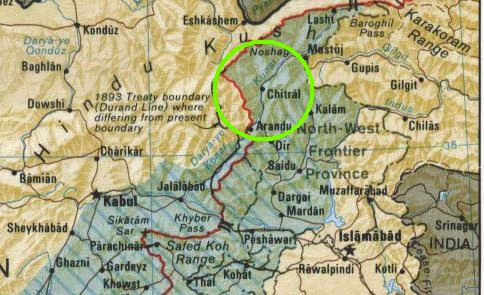 "Whereas many a Tibetan text simply locates Uddiyana by saying that it lies to the West of India, Patrul Rinpoche (b. 1808) provides us with more detail when describing the birth place of Garab Dorje not simply as 'Uddiyana' but as being close to Lake Kutra in the region of Dhanakosha; thus indicating present day North-eastern Kashmir (now Pakistan) - a region right in the middle between Chitral, Gilgit and Swat. [The Words of My Perfect Teacher, pages 338-339]

Chitral is the area of the greatest linguistic diversity in the world. Although Khowar is the predominant language of Chitral, more than ten other languages are spoken here. These include Kalasha-mun, Palula, Dameli, Gawar-Bati, Nuristani, Yidgha, Burushaski, Gujar, Wakhi, Kyrgyz, Persian and Pashto. Since many of these languages have no written form, letters are usually written in Urdu or Persian.

The Kalash tribe, numbering approximately 3,000, are the smallest group amongst the religious minorities of Pakistan. Non-Muslim, they live in the Hindu Kush between the Afghan border and Chitral valley near the region once known as Bactria. Kalash myths tell that they originally came from Tsiam, thought to be near Yarkand. The Kalasha oral tradition mentions eight great Kalasha kings. This tribe enjoyed centuries of independence living as warriors and hunters. For eight or nine centuries they held out against the tide of Islam, raiding Muslim settlements and caravans until at the end of the last century they came under the suzerainty of Afghanistan. Their way of life, architecture, traditional culture and language are remnants of the former traditions . They still live in villages of 2 story wooden houses remarkable both inside and out for neatness and cleaness, are clustered together, clinging precariously to the steep- sided valleys , the women still till their fields by hand, while the men look after their live stock and irrigation channels.

A leader of the Kalash, Saifulla Jan, has stated, "If any Kalash converts to Islam, they cannot live among us anymore. We keep our identity strong." Much of their mythology and folklore are quite similar to those of ancient Greece and the Indo-Iranian traditions. Their religion and belief system strongly resembles those of the Indo-Aryans and pre-Zoroastrian Iranians. They believe in a number of deities, demi-gods and spirits and a whole pantheon. At the core of all Kalash cosmology are the concepts of onjesta and pragata energies. All life forms, places and objects are accorded measures of onjesta and pragata. Their spiritual leaders maintain our legends. They can recite or sing all 4,000 of them. They will teach their sons to do the same. The shaman communicates with our gods to find out what needs to be done and informs us.' The Kalash don't have a word for goodbye? They never leave here; otherwise they lose their identity.'

The neighboring Nuristani people of the adjacent Nuristan (historically known as Kafiristan) province of Afghanistan once practiced the same polytheistic religion as the Kalash. However, by the late 19th century much of Nuristan had been converted to Islam, but the Kalasha of Chitral maintained their own separate cultural traditions.