Shambhala and the Kingdom of Oddiyana

Tibetan texts simply explain that Oddiyana was a kingdom that lay to the west or northwest of India... 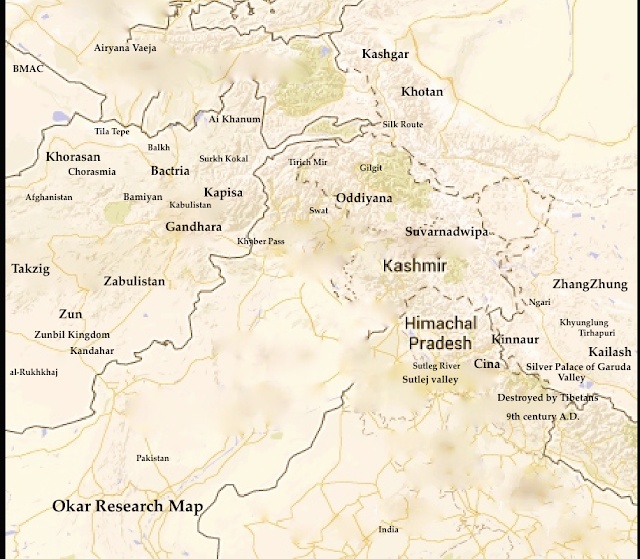 "When Giuseppe Tucci strongly proposed the idea (in 1940) that the land known as Uddiyana was finally identified as the Swat valley, he did not know Patrul Rinpoche's text (translated in 1994). Instead, he based himself on two medieval Tibetan travelers who had visited Swat and believed it to be the legendary region that produced such well known adepts as Garab Dorje, Padmasambhava, Luipa and Tilopa - not to mention their mainly female teachers; the women who made this country famous as Paradise of the Dakinis. Tucci had translated these medieval texts and published them as Travels of Tibetan Pilgrims in the Swat Valley - and from then onwards, most authors and translators kept reciting and reprinting the mantra "Uddiyana is Swat" until almost everyone believed it....(http://yoniversum.nl/dakini/uddiyana.html)

"This new concept of a greater Uddiyana is described most objectively - to my knowledge - by John Myrdhin Reynolds...he concludes that 'perhaps Uddiyana is actually the name of a much wider geographical area than the Swat Valley alone, one embracing parts of Pakistan, Afghanistan, and even Western Tibet (Zhang-zhung)." [1996, The Golden Letters. Snow Lion Publications]

in 720 A.D., the T'ang Annals state that the Emperor sent ambassadors to Uddiyana to confer the investiture on the new king. Therefore, 720 A.D. must mark the date that King Indrabhuti, the famous adoptive father of Padmasambhava, succeeded to the throne.

With regard to the origins of the Vajrayana teachings, the tantric scriptures recount that it was King Dza of the kingdom of Zahor who first received the tantras, which landed miraculously on his palace roof. It is believed that Dza is another name for King Indrabodhi of Oddiyana. If this is the case, then the tantras began to be disseminated in Oddiyana. The first human Dzogchen master, Garab Dorje, was born near Lake Kutra in Oddiyana. His disciple, Manjushrimitra, was Indian and received the teachings in Bodh Gaya, and the next lineage holder, Shri Singha, came from the Central Asian kingdom of Khotan, but it was in Oddiyana near Lake Dhanakosha that he passed the lineage to Vairotsana. Padmasambhava, who was to introduce Vajrayana and Dzogchen to Tibet was miraculously born on Lake Dhanakosha and raised by the king of Oddiyana. Many of the Dzogchen texts that were translated into Tibetan during the early period of transmission were translated from the language of Oddiyana.

According to Rigpa Shedra, Oddiyana was "one of the twenty-four sacred places, Oddiyana played an important role in the history of Buddhism, especially from the perspective of Tibetan Buddhism. It is believed to be the homeland of both the Vajrayana and Dzogchen teachings, and is said to be the land where Garab Dorje, Vairotsana, Padmasambhava and Tilopa, amongst others, received the transmissions of Dzogchen. Buddhist texts speak of Oddiyana as a beautifully green and fertile kingdom, inhabited by gentle people often clothed in white, who had great respect for wisdom and learning." .....(http://newbuddhist.com/discussion/13687/oḍḍiyana-interesting-tidbits)

The Gandhāran cultural area consisted of Oddiyana, Gandhara and Bactria, Tokharistan, across the Khyber Pass.

Hiuen Tsang says of the inhabitants: "The men are of a soft and pusillanimous character, naturally inclined to craft and trickery. They are fond of study, but pursue it with no ardour. The science of magical formulae is become a regular professional business with them. They generally wear clothes of white cotton, and rarely use any other stuff. Their spoken language, in spite of some differences, has a strong resemblance to that of India."

"We today are able to gain a fairly vivid picture of the ancient Kingdom of Uddiyana, because in the year 630 A.D., a renowned heroic Chinese Buddhist pilgrim, known by the name of Huen Tsiang [Xuanzang], passed through the heart of Uddiyana on his way to India. ...The people of Uddiyana, according to Huen Tsiang, were gentle, soft and effeminate. In our imagination he conjures a scene of healthy, tanned people, mostly clothed in pure white cotton. The men have white turbans, the women soft flowing saris, also white. These are a gentle, happy people, rarely endangered by war or calamity. They are a society appreciative of fine culture, and they are all, reported Huen Tsiang, great lovers of learning....Huen Tsiang viewed himself a scholar-monk of the pure Zen (Chan) tradition of Buddhism, he wrote, "They are addicted to the art of reciting charms." ...

The Gandhāran Buddhist Texts (oldest Buddhist manuscripts yet discovered, from ca. 1 CE) are attributed to the Dharmaguptaka school. And some believe that the founder of that Buddhist school was...a Greek ....."Dhammarakkhita (Pali, "protected by the Dharma"), was one of the missionaries sent by the Mauryan emperor Ashoka to proselytize the Buddhist faith. He is described as being a Greek (Pali yona) in the Mahavamsa, and his activities are indicative of the strength of the Hellenistic Greek involvement during the formative centuries of Buddhism. (http://en.wikipedia.org/wiki/Dharmaraksita) ....."One of the major missionaries was Yonaka Dhammarakkhita. He was...a Greek monk, native of ‘Alasanda’ (Alexandria). He features in the Pali tradition as a master of psychic powers as well as an expert on Abhidhamma.

Uddiyana to be the most likely mediator for:
1. injecting Persian concepts into Bön,
2. transmitting Kashmir Shaiva-teachings into Tibetan Buddhism and
3. combining the early Mahayana of India with Tantric teachings and aspects of folk-religion, a mixture that helped shape the later Vajrayana of Tibet and its surrounding regions.


"Udyana lay to the north of Peshawar on the Swat River, but from the extent assigned to it by Hiuen Tsang, the name probably covered a large part of the whole hill-region south of the Hindu-Kush from Chitral to the Indus, as indeed it is represented in the Map of Vivien de St. Martin (Pelerins Bouddhistes, II.). It is regarded by Fahian as the most northerly Province of India, and in his time the food and clothing of the people were similar to those of Gangetic India. It was the native country of Padma Sambhava, one of the chief apostles of Lamaism, i.e. of Tibetan Buddhism, and a great master of enchantments. The doctrines of Sakya, as they prevailed in Udyana in old times, were probably strongly tinged with Sivaitic magic, and the Tibetans still regard that locality as the classic ground of sorcery and witchcraft.

["Tao-lin (a Buddhist monk like Hiuen Tsang) afterwards left the western regions and changed his road to go to Northern India; he made a pilgrimage to Kia-che-mi-louo (Kashmir), and then entered the country of U-ch'ang-na (Udyana)...." (Ed. Chavannes, I-tsing, p. 105.)--H. C.]

In 642 A.D., a " King Ta-mo-yin-t'o-ho-szu" 3 of Uddiyana is said to have sent a gift of camphor and an embassy to the Emperor of China. This is the year that the Arabs succeeded in defeating the King of Kings, Yazdagird 111, of Persia. The latter, fleeing eastward, met his death near Merv in 651. With the death of Yazdagird, last of the Sassanid dynasty, the southern bedouin hordes of Islam for the first time marched onto the soil of Iran and began their great, rapacious advance eastward. The kings of the Orient had cause to fear the coming of the Arabs. These southerners were savagely barbarian; a patchwork of desert tribes woven together by the threads of a fanatical monotheism and a religion which encouraged them to slay with the sword those whom they could not convert to their personal dominion. " Fight those who do not believe in Allah and the Last Day," says the Koran (Sura 9:29), " ...until they pay you tribute out of hand, having brought them low.".....http://www.dharmafellowship.org/biographies/historicalsaints/lord-padmasambhava.htm#eightcentury

"Subhakarasimha's journey to China which interests us is his brief stay in Uddiyana between the years 714 and 715 A.D.12 Pei, in the Wen-yuan ying-huo reports that he was commissioned to teach the profound Mahavairocana-tantra to the son of the khatun of Uddiyana. The term khatun is a Turkishahiya title for Queen. This implies that the King of Uddiyana, " Ta-mo-yin-t'o-ho-szu," mentioned in the Chinese records for the year 642, was deceased. A Queen, or Khatun, was on the throne, and she had a son and heir-a boy who was sufficiently mature to be involved in the higher scholastic Sanskrit studies of Yoga tantra. This boy must have been the young Indrabhuti, the king of Udiyana who figures so prominently in the biography of Lord Padmasambhava. Six years after Subhakarasimha's visit, in 720 A.D., the T'ang Annals state that the Emperor sent ambassadors to Uddiyana to confer the investiture on the new king. Therefore, 720 A.D. must mark the date that King Indrabhuti, the famous adoptive father of Padmasambhava, succeeded to the throne.".....http://www.dharmafellowship.org/biographies/historicalsaints/lord-padmasambhava.htm#eightcentury