"In 1220 AD Genghis Khan sacked Balkh, butchered its inhabitants and levelled all the buildings capable of defense..." 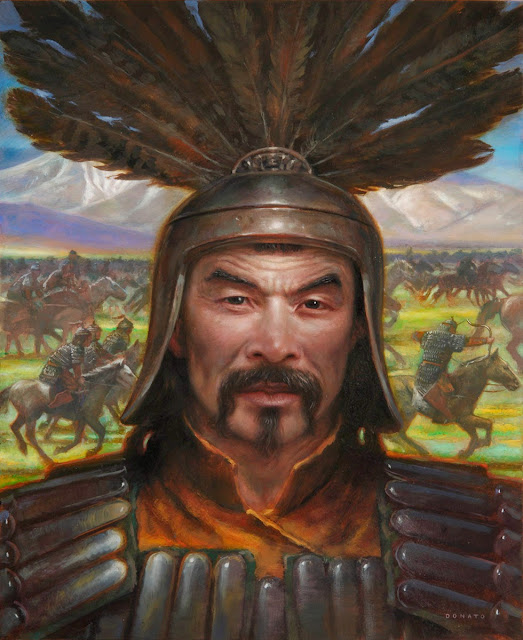 In 1578, in the midst of a military campaign, Abtai Khan—the powerful Kalkha Mongol lord and unifer of Mongolia—became fascinated with Tibetan Buddhism and converted to the religion.

The term "Khalkha" (or Халх) has always puzzled linguists and historians. One possible interpretation is that it share the same root with the words "Халхавч" or "Shield" and "Халхлах" or to protect; to cover; to shield; to hide; to intercept; etc.

early 1920s. Thanks partly to Ungern-Sternberg, the hope of a Shambhalic Messiah grew more specific and even political. The Panchen Lama, at the great monastery of Shigatse, claimed that a predecessor had received a message from the King of the World, written on golden tablets. Expelled in 1923 through a dispute with the more powerful Dalai Lama, he traveled north in the direction of Mongolia, founding colleges allegedly in touch with Shambhala. Mongols began to speak of the War of Shambhala as getting close and to favor the identification of the promised Messiah as Gesar Khan, a hero of their own epic tradition who was destined to return like King Arthur. He would form an Asian alliance against the white races. Alexandra David-Neel, a student of Lamaism who translated the Gesar epic, saw a shrine with an image of the hero, before which a woman prayed for a son who could fight for him. She was assured several times that he was already in the world and would be manifested in fifteen years. According to her own account, the bard who dictated the epic to her gave her a flower that was a present from Gesar himself—a blue flower of a species that bloomed in July, though it was winter at the time. Another Western inquirer was the distinguished Russian artist and anthropologist Nicholas Roerich, remembered especially as Stravinsky’s collaborator in devising rituals for his ballet The Rite of Spring. Hearing of the ferment in Central Asia, Roerich led an expedition that set off in 1923 and assembled many reports and rumors. He respected some of these as predictive but hoped for a new dawn of enlightenment rather than an outbreak of militancy. As a Shambhalic Messiah he preferred the pacific Maitreya to the martial Gesar.

"lamas have prophesied a future War of Shambhala in which good forces will conquer evil and bring in a golden age. The messianic figure who will then step forth from the holy place is conceived in different ways. He may be a king of Shambhala called Rigden Jye-po. He may be Gesar, a Mongolian legendary hero."

In this photo Prof. Bira (The Roerich Shambhala Museum in Ulaanbaatar) studies the only Nicholas Roerich painting known to exist in Mongolia, “The King of Shambhala,” or “Rigden Gyalpo.” It is one of the many paintings created by Nicholas Roerich during his residence in Ulaanbaatar in 1926-27. The painting was presented by Nicholas Roerich to the Mongolian government in 1927. Its survival was in doubt for some years during the Stalinist period, and was feared lost during the terrible years of the Cultural Purges of the 1930s and 1940s. However, it was re-discovered during the George Roerich visit to Ulaanbaatar (with Bira as translator and guide) of 1958.

GHUR..."Subjugation of the mountainous region of Ghur required great effort of the part of the Mongols. The mongols gradually adopted the Iranian language. The Hazaras are Mongolian in origin but Iranian by speech. Between Harat and Qandahar. On the upper reaches of the Murghab River live the Mongols who speak Persian. There is a road from Badakhshan to Tibet." (Barhtold: 1984..pg 83)

...(65E..34N)..."Ghuristan attained its greatest splendor in 1148-1215 during the Sam Dynasty. Their great capital was Biruzkuh (Firuzkuh)(Turquoise Mountain) an immense fortress in the mountains, site unknown. Great mountainous region and source of many great rivers. Murghab River. Headwaters of the Hari River. Castle was called Kal'ah Khastar. Bamiyan. Herat, rich city of 400,000 people in the 12th century. Great Buddhist sculptures at Bamiyan.Bactria. The city of Bamiyan was the capital of a great district and a great Buddhist center long before the days of Islam. Great sculpture. The Ghurid princes were defeated in 1215 AD and the dynasty disappeared a few years later with the Mongol invasion. Destroyed by Ghengis Khan in 1222 AD. The great castles (kal'ah) mentioned in its history seem to have disappeared. " (Le Strange: 1966..pg 418). 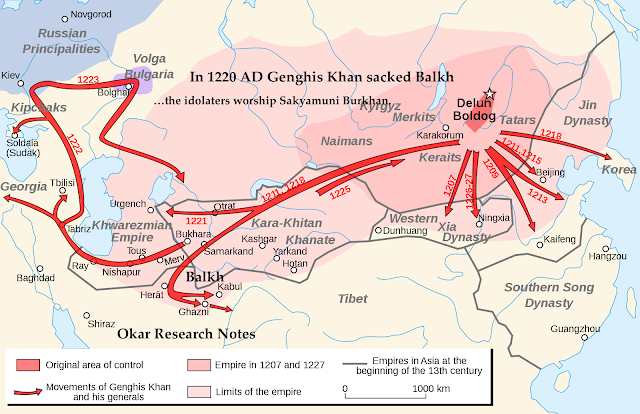 Genghis Khan, the Mongolian warrior/butcher of the 13th century, may have done more than rule the largest empire in the world; according to a recently published genetic study, he may have helped populate it too.....An international group of geneticists studying Y-chromosome data have found that nearly 8 percent of the men living in the region of the former Mongol empire carry y-chromosomes that are nearly identical. That translates to 0.5 percent of the male population in the world, or roughly 16 million descendants living today......His military conquests were frequently characterized by the wholesale slaughter of the vanquished. His descendants extended the empire and maintained power in the region for several hundred years, in civilizations in which harems and concubines were the norm. And the males were markedly prolific.......Khan's eldest son, Tushi, is reported to have had 40 sons. Documents written during or just after Khan's reign say that after a conquest, looting, pillaging, and rape were the spoils of war for all soldiers, but that Khan got first pick of the beautiful women. His grandson, Kubilai Khan, who established the Yuan Dynasty in China, had 22 legitimate sons, and was reported to have added 30 virgins to his harem each year.

Modu Chanyu (simplified Chinese: 冒顿单于; traditional Chinese: 冒頓單于; pinyin: Mòdú Chányú, sometimes also transcribed Modu and Maodun) was born c. 234 BCE was the fourth known emperor and founder of the Xiongnu Empire after he killed his father in 209 BCE. Modu ruled from 209 BCE to 174 BCE. He was a military leader under his father Touman, and later the Chanyu and king of the Xiongnu, centered in modern day Mongolia......Once he had secured the throne, he established a powerful Xiongnu Empire by successfully unifying the tribes of the Mongolian steppes and hence posed an imminent threat to the Chinese Qin Dynasty. His Xiongnu Empire was one of the largest of his time – the eastern border stretched as far as the Liao River, the western borders of the empire reached the Pamir Mountains whilst the northern border reached Lake Baikal......He was succeeded by his son Laoshang.

"The Mongol invasions of the Islamic world began in 1221 with the conquest of eastern Iran. A more devastating wave of conquest, however, came with Genghis Khan's grandson Hülegü, when Mongol forces subjugated all of Iran and by 1258 had also taken Baghdad, thus bringing to an end the cAbbasid caliphate (750–1258). Establishing rule over most of West Asia, including Iraq, Iran, Khorasan, the Caucasus, and parts of Asia Minor, Hülegü (r. 1256–65) assumed the title of "Il-Khan," meaning lesser Khan, subordinate to the Great Khan ruling in China. This branch of the Mongol dynasty, which became known as the Ilkhanids (1256–1353), centered its power in northwest Iran........Although Mongol conquests initially brought devastation and affected the balance of artistic production, in a short period of time, the control of most of Asia by the Mongols—the so-called Pax Mongolica—created an environment of tremendous cultural exchange. Following the conversion to Islam of the Il-Khan Ghazan (r. 1295–1304) in 1295 and the establishment of his active cultural policy in support of his new religion, Islamic art flourished once again. East Asian elements absorbed into the existing Perso-Islamic repertoire created a new artistic vocabulary, one that was emulated from Anatolia to India, profoundly affecting artistic production. ......During the Ilkhanid period, the decorative arts—textiles, pottery, metalwork, jewelry, and manuscript illumination and illustration—continued along and further developed established lines. The arts of the book, however, including illuminated and illustrated manuscripts of religious and secular texts, became a major focus of artistic production. Baghdad became an important center once again. In illustration, new ideas and motifs were introduced into the repertoire of the Muslim artist, including an altered and more Chinese depiction of pictorial space, as well as motifs such as lotuses and peonies, cloud bands, and dragons and phoenixes. Popular subjects, also sponsored by the court, included well-known stories such as the Shahnama (Book of Kings), the famous Persian epic. Furthermore, the widespread use of paper and textiles also enabled new designs to be readily transferred from one medium to another. ......Along with their renown in the arts, the Ilkhanids were also great builders. The lavishly decorated Ilkhanid summer palace at Takht-i Sulayman (ca. 1275), a site with pre-Islamic Iranian resonances, is an important example of secular architecture. The outstanding Tomb of Uljaytu (built 1307–13; r. 1304–16) in Sultaniyya, however, is the architectural masterpiece of the period. Following their conversion to Islam, the Ilkhanids built numerous mosques and Sufi shrines in cities across Iran such as Ardabil, Isfahan, Natanz, Tabriz, Varamin, and Yazd (ca. 1300–1350). After the death of the last Ilkhanid ruler of the united dynasty in 1335, the empire disintegrated and a number of local dynasties came to power in Iraq and Iran, each emulating the style set by the Ilkhanids......Suzan Yalman.....Department of Education, The Metropolitan Museum of Art