....Yājñavalkya (Devanagari: याज्ञवल्क्य) of Videha ( c. 7th century BC) , ..... the Brhadaranyaka Upanishad, As a mirror stained with impurities cannot reflect an image, so the impure heart cannot reflect Self-Knowledge”.

"Yājñavalkya was a sage and philosopher of Vedic India. He was one of the first philosophers in recorded history, alongside Uddalaka Aruni.In the court of King Janaka of Mithila, he was renowned for his expertise in Vedic ritual and his unrivaled talent in theological debate. He expounded a doctrine of neti neti to describe the universal Self or Ātman. He later became a wandering ascetic. His teachings are recorded in the Shatapatha Brahmana and the Brihadaranyaka Upanishad......He is traditionally credited with the authorship of the Shatapatha Brahmana (including the Brihadaranyaka Upanishad), besides the Yoga Yajnavalkya and the Yājñavalkya Smṛti. He is also a major figure in the Upanishads." 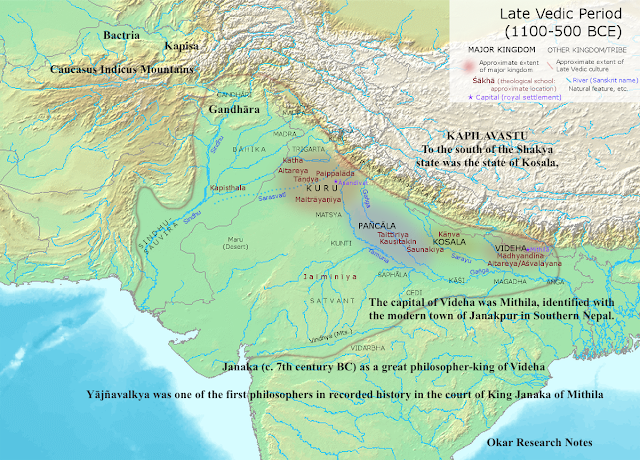 "Videha (Sanskrit: विदेह) was an ancient South Asian kingdom, located in what is now eastern Terai-Madhesh region of Nepal and the northern Indian state of Bihar. During the late Vedic period (c.850-500 BC), it became a dominant political and cultural centre of South Asia. Late Vedic literature such as the Shatapatha Brahmana and the Brihadaranyaka Upanishad both mention Janaka (c. 7th century BC) as a great philosopher-king of Videha, renowned for his patronage of Vedic culture and philosophy, and whose court was an intellectual centre for Brahmin sages such as Yajnavalkya......Towards the end of the Vedic period (c. 500 BC), Videha was absorbed into the Vajji confederation and subsequently into the Magadha empire. The Videha kingdom is also mentioned in the Sanskrit epics, the Mahabharata and the Ramayana. The latter mentions a marriage alliance between the kingdoms of Kosala and Videha. The capital of Videha was Mithila, identified with the modern town of Janakpur in Southern Nepal."

"The Bṛhadāraṇyaka Upanishad (Sanskrit: बृहदारण्यक उपनिषद्) is one of the oldest, mukhya (primary) Upanishads. It is contained within the Shatapatha Brahmana, which is itself a part of Shukla Yajur Veda......Brihadaranyaka Upanishad is estimated to have been composed about 700 BC."

"Then Yājñavalkya said....The thirty-three Gods are the principal manifestations, and others are only their glories, radiances, manifestations, magnificences or forces, energies, powers... The term 'god' means a power that causally works inside a form. That which regulates from inside any particular individual, groups of individuals, etc. is the god of that individual or the god of that group of individuals. In a broad sense we may say, the cause of anything is the deity of that thing. Now again we have to bring to our mind the meaning of the word 'cause'. The deity does not operate as an external cause. The sun as the cause of the eye is not the sun that is ninety-three million miles away, disconnected from the eye in space. The god of any particular phenomenon is the invisible presence."......The Brihadaranyaka Upanishad

"Then Yājñavalkya said......Darkness is the abode of something. Is there something whose abode is darkness? And for whom the heart is the perceiving medium, hṛdayaṁ lokaḥ, and the mind is the guide...."....The Brihadaranyaka Upanishad

"Heart....hṛdayaṁ lokaḥ......The Heart Sūtra (Sanskrit: प्रज्ञापारमिताहृदय Prajñāpāramitāhṛdaya) is a famous sūtra in Mahāyāna Buddhism. Its Sanskrit title, Prajñāpāramitāhṛdaya, literally means "The Heart of the Perfection of Understanding....The word Hridaya is a composite of hrid and ayam - "center, this". It is the center on the right, which we reach as a result of meditation (Samadhi). From the Hridaya, consciousness arises to the sahasrara through the sushumna and from there spreads out to all the parts of the body through the several 'nadis'. Then alone we become conscious of the objects around us....due to the illusion that these have real existence, experiences suffering, man strays far away from his Self. The seat from where all these arise and manifest is the Hridaya."

Yājñavalkya Hridaya.....“Yajnavalkya said: ‘Indha is the Self identified with the physical self. Viraj, the physical world is his wife, the object of his enjoyment. The space within the heart is their place of union in dream, when the Self is identified with the subtle body, or mind. The Self in dreamless sleep is identified with the vital force. Beyond this is the Supreme Self–he that has been described as Not This, Not That. He is incomprehensible, for he cannot be comprehended; he is undecaying, for he never decays; he is unattached, for he does not attach himself; he is unfettered, for nothing can fetter him. He is never hurt. You have attained him who is free from fear, O Janaka, and free from birth and death.’..(Brihadaranyaka Upanishad 4:3:1-7).

"When the sun has set, and the moon has set, and the fire has gone out, and no sound is heard, what serves then as his light?’ Yajnavalkya said: ‘The Self indeed is his light; for by the light of the Self man sits, moves about, does his work, and when his work is done, rests.’
King Janaka said: ‘Who is that Self?’ .......Yajnavalkya said: ‘The self-luminous being who dwells within the lotus of the heart, surrounded by the senses and sense organs, and who is the light of the intellect, is that Self. Becoming identified with the intellect, he moves to and fro, through birth and death, between this world and the next. Becoming identified with the intellect, the Self appears to be thinking, appears to be moving. While the mind is dreaming, the Self also appears to be dreaming, and to be beyond the next world as well as this.’” (Brihadaranyaka Upanishad 4:3:1-7).

"...I keep the Awareness on the Heart Center, and on “Breathing-in the Light into my Eyes, then flowing it into the Heart”, to fill the Heart......the Kati Channel becomes better defined, warmer, more perceivable, more and more active and energised....".. http://hridaya-yoga.com/category/blog/

"Position your body with the seven attributes like before. Steadily fix your gaze in the space in front of you, into the vacuity at the level of the tip of your nose, without any disorderliness or duplicity. This is the benefit of this gaze: in the center of the hearts of all beings there is the hollow crystal kati channel, which is a channel of primordial wisdom. If it points down and is closed off, primordial wisdom is obscured, and delusion grows. Thus, in animals that channel faces downwards and is closed off, so they are foolish and deluded. In humans that channel points horizontally and is slightly open, so human intelligence is bright and our consciousness is clear. In people who have attained siddhis and in bodhisattvas that channel is open and faces upwards, so there arise unimaginable samādhis, primordial wisdom of knowledge, and vast extrasensory perceptions. These occur due to the open quality of that channel of primordial wisdom. Thus, when the eyes are closed, that channel is closed off and points down, so consciousness is dimmed by the delusion of darkness. By steadily fixing the gaze, that channel faces up and opens, which isolates pure awareness from impure awareness. Then clear, thought-free samādhi arises, and numerous pure visions appear. Thus, the gaze is important. ..".....http://thedaobums.com/topic/36286-more-about-the-kati-crystal-heart-channel/