"Sir William Jones reveals his admiration for the eldest son of Shah Jahān, the scholar prince Dārā Šokōh, who had inherited the syncretic mantle of his great-grandfather, Akbar, composing a Persian text entitled Majmaʿ al-baḥ-rayn (The Mingling of the Two Oceans) that maintained that the fundamental tenets of Hinduism were essentially monotheistic and identical with those of Islam. Jones also followed Dārā Šokōh’s lead in being drawn to the late Vedas, the Upanishads. Dārā Šokōh had assembled a team of pandits from Benares to translate the Upanishads into Persian, producing in 1657 the Serr-e akbar (The Great Secret). Jones also loved revealing great secrets and, although Anquetil-Duperron had translated four of the Upanishads from the Serr-e akbar into French in 1787, and later published the influential Oupnek’hat (1802) which included the entire fifty-one Upanishads of the Serr-e akbar, Jones’s Isa-Upanishad was the first direct translation of an Upanishad from the Sanskrit into a Western language....." Sir William Jones (1746-1794), orientalist and judge, noted for his enduring commitment to a syncretic East-West synthesis and unshakeable belief in cultural pluralism.

"DĀRĀ ŠOKŌH...(1615- 1659), first son of the Mughal emperor Shah Jahān and his wife Momtāz Maḥall, religious thinker, mystic, poet, and author of a number of works in Persian." 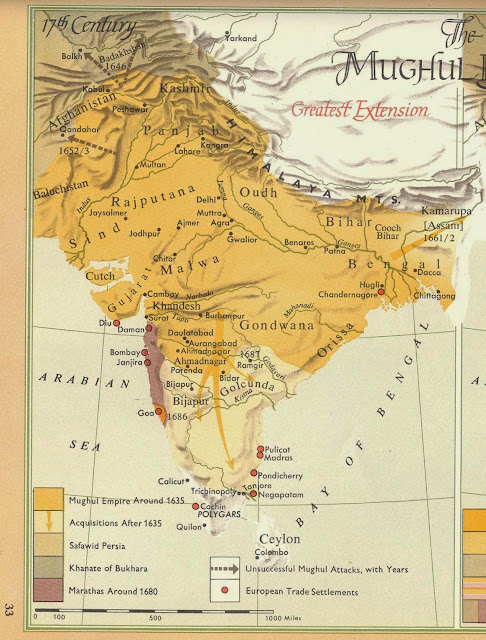 "Dārā Šokōh’s interest was not so much in the reconciliation of Islam and Hinduism on the political and practical level, on which Akbar had focused; rather, it was focused on the experiential realization that esoteric understanding of both religions provides proof of a single divine principle behind the variety of outward manifestations, just “as the ocean is one and the waves and foam flecks cannot be distinguished from it once they disappear” (Resāla, p. 17)."...http://www.iranicaonline.org/articles/dara-sokoh

"Dārā Šokōh’s interests were geared to philosophy and mysticism, and it is said that he accepted an appointment as governor of Allāhābād in 1055/1645 only because it was the seat of Moḥebb-Allāh Allāhābādī (d. 1648 AD), the most famous interpreter of the philosophy of Ebn al-ʿArabī (d. 1240 AD) in that period....... Ebn al-ʿArabī was the most influential Sufi author of later Islamic history, known to his supporters as al-Šayḵ al-akbar, “the Greatest Master.”....http://www.iranicaonline.org/articles/dara-sokoh

"Both Jahāngīr (1605-27 AD) and Shah Jahān had shown reverence for Sufis and saintly Hindus. Thus when Dārā Šokōh fell seriously ill as a teenager his father took him to Lahore to Mīān Mīr (d. 1635 AD), a shaikh of the Qāderīya order, which was becoming prominent in Sind and the southern Punjab in the late 16th century. The boy was cured and at the same time developed a deep veneration for Mīān Mīr. In his second book, Sakīnat al-awlīāʾ (comp. 1642 AD), Dārā Šokōh expressed his devotion to Mīān Mīr, to his saintly sister Bībī Jamāl Ḵātūn, and to Mollā Šāh Badaḵšī (d. 1661 AD), who had continued the spiritual chain after Mīān Mīr’s death and under whom Dārā Šokōh and his sister Jahānārā had joined the order in 1640 AD. This book is a useful introduction to mystical life and lore in Lahore and Kashmir, based mainly on firsthand information.".....http://www.iranicaonline.org/articles/dara-sokoh

"He became familiar with certain Sufi practices, like ḥabs-e dam, the retaining of one’s breath during the ḏekr, a practice that he described in detail (Resāla-ye ḥaqqnomā, p. 13). He did not, however, believe in exaggerated austerities, which in any case would have been difficult for him as heir apparent to a vast country."......http://www.iranicaonline.org/articles/dara-sokoh

"His next work, Resāla-ye ḥaqqnomā (comp. 1646 AD) is one of his most impressive studies of Sufism, in the vein of Ebn al-ʿArabī, by whose philosophy he was deeply influenced; most of the Sufis with whom he corresponded, like Moḥebb-Allāh and Shah Delrobā, were proponents of the theories of waḥdat al-wojūd (“unity of being,” as developed by Ebn al-ʿArabī, often incorrectly translated “pantheism”). In this small book he tried to explain the four planes of being, rising from nāsūt (the world of humanity) to the heights of lāhūt (the world of divinity). He considered this booklet to be a compendium of Ebn al-ʿArabī’s Fotūḥāt al-makkīya and Foṣūṣ al-ḥekam, as well as of the Lamaʿāt of Faḵr-al-Dīn ʿErāqī (d. 1289 AD) and the Lawāʾeḥ of Jāmī (d. 1492 AD). In his closing verse, which includes the date of completion, he claimed the book to have been divinely inspired. In the Resāla Dārā Šokōh called self-knowledge eksīr-e aʿẓam (the mightiest elixir), ....... some of the verses are interesting because of their bold assertion that “paradise is where there is no mollā (Mullah: Islamic clergy).”.... ...http://www.iranicaonline.org/articles/dara-sokoh

"Dārā Šokōh’s interest in the esoteric aspects of Islam and his pursuit of genuine tawḥīd led him to study other religious traditions as well. An important step on his way to understanding the major religion of his future realm, Hinduism, was a series of conversations with the Hindu sage Baba Lal Das, a member of the reformist Kabirpanthi sect whom he met in the city of Lahore in late 1653 AD after his return from the disastrous siege of Qandahār. Dārā Šokōh’s secretary Chandar Bhan Brahman, a noted poet and master of Persian style, recorded in Persian the text of the discussions, which were conducted in Hindi. These “entretiens de Lahore,” as Clément Huart and Louis Massignon have called them, reveal the prince’s sound knowledge of Indian mythology and philosophy, which is not amazing at all, as his great-grandfather Akbar the Great (1542–1605 AD) had ordered Persian translations of numerous important Sanskrit works. The discussions ranged from purely philosophical concepts to problems of interpretation of the Ramayana."..... ...http://www.iranicaonline.org/articles/dara-sokoh

"A book that displays even more clearly Dārā Šokōh’s interest in the terms common to Hindu thought and Islamic Sufism is Majmaʿ al-baḥrayn (comp. 1655 AD). Its very title, taken from Koran 18:60, underscores his intention to prove that on the level of monistic thought the “two oceans” of Islam and Hinduism become indistinguishable; the book in fact contains a number of Hindu technical terms, which he attempted to explain in Persian...After finishing this work the prince, by then slightly more than forty years old, embarked upon his major undertaking, a translation of fifty-two Upanishads, for which he had invited the consultation of a good number of Brahmans and pandits. ."....... ...http://www.iranicaonline.org/articles/dara-sokoh

"The work, entitled Serr-e akbar, was completed in the first half of 1657 AD...... Dārā Šokōh was strongly convinced, as he wrote in his introduction, that religious truth is not solely contained in the books explicitly mentioned in the Koran: the Torah, Psalms, and Gospels. In the Koran itself (56:78) a “hidden book,” not yet discovered, is mentioned. He argued that this hidden book was the oldest revelation, as contained in the Vedas and in particular the Vedanta."....... ...http://www.iranicaonline.org/articles/dara-sokoh

"Dārā Šokōh was deeply convinced of the reality of mystical experience.....He took Muslim mystics and miracle workers, as well as yogis and sannyasis, with him on his ill-fated expedition to Qandahār. It was quite natural that the more orthodox circles around him should have disapproved of his predilection for mystical thought and practice, as well as of his disinterest in practical political activity. His brother Awrangzēb......declared Dārā Šokōh a heretic (molḥed), whose possible ascent to the throne would be disastrous for Islam.....fter a trial for heresy he was executed in 1659 and buried in the mausoleum of his ancestor Homāyūn in Delhi."....http://www.iranicaonline.org/articles/dara-sokoh