GÖBL, ROBERT, Austrian numismatist (b. Vienna, 1919-1997)...... University of Vienna, Professor of Ancient Numismatics and the Pre-Islamic History of Central Asia

Göbl’s acquaintance with Franz Altheim made him interested in the coinage of the Sasanians......at the University of Vienna. He also took over from Pink the Numismatischer Lehrapparat, which had been founded by Wilhelm Kubitschek at the Department of Ancient History, Epigraphics and Classical Archeology....His mentor in studying numismatics was Karl Pink.... In 1973, Göbl published his Sasanidischer Siegelkanon, which has become a tool for the analytical classification of Sasanian seal stones. This contribution was closely connected to the recording of a large hoard of clay sealings from Taḵt-e Solaymān, which were assigned to Göbl for classification by the Deutches Archäologisches Institut....Some of his lectures have been published in his Antike Numismatik, which is an analytical handbook on ancient numismatics."........http://www.iranicaonline.org/articles/gbl-

"Kushan coinage......In the coinage of the North Indian and Central Asian Kushan Empire (approximately 30-375 CE) the main coins issued were gold, weighing 7.9g., and base metal issues of various weights between 12g and 1.5g. Little silver coinage was issued, but in later periods the gold used was debased with silver.......The coin designs usually broadly follow the styles of the preceding Greco-Bactrian rulers in using Hellenistic styles of image, with a deity on one side and the king on the other. Kings may be shown as a profile head, a standing figure, typically officiating at a fire altar in Zoroastrian style, or mounted on a horse. The artistry of the dies is generally lower than the exceptionally high standards of the best coins of Greco-Bactrian rulers. Continuing influence from Roman coins can be seen in designs of the late 1st and 2nd century CE, and also in mint practices evidenced on the coins, as well as a gradual reduction in the value of the metal in base metal coins, so that they become virtual tokens. Iranian influence, especially in the royal figures and the pantheon of deities used, is even stronger. Under Kanishka the royal title of "King of kings" changed from the Greek "ΒΑΣΙΛΕΥΣ ΒΑΣΙΛΕΩΝ" to the Persian form "ϷAONANOϷAO" (Shah of Shahs).......Much of what little information we have of Kushan political history derives from coins. The language of inscriptions is typically the Bactrian language, written in a script derived from Greek. Many coins show the tamga symbols as a kind of monogram for the ruler. There were several regional mints, and the evidence from coins suggests that much of the empire was semi-independent.".......MacDowell, David W., "Mithra": "Mithra's Planetary Setting in the Coinage of the Great Kushans", in Études Mithriaques: 1975

Coin of Kaniska Kushan, Late or Early 2nd c. A.D.......The view that the halo is the Hvareno of the Persians et Zoroastre and by Dhalla, the great authority on Zoroastrianism, who records the fact that "the Magi had established themselves during the Parthian period (248 B.C.-A.D. 222) in large numbers in eastern Asia Minor, Galatia, Phrygia, Lydia and even in Egypt and that the kings of Cappadocia, Pontus and Bactria honoured the 'Glory’.” ....http://www.cais-soas.com/CAIS/Religions/iranian/Zarathushtrian/halo_its_origin.htm 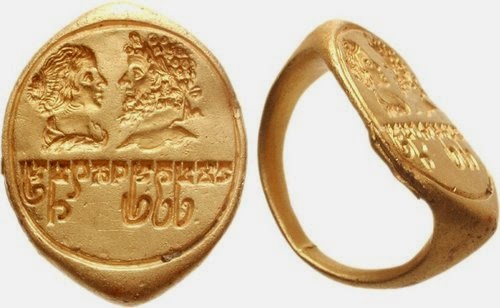 "Kushan Dynastic Ring.....Gold finger ring from Ancient India. Kushan period, early 3rd century AD. Solid gold ring, of typical Roman shape, fabricated rather than cast......portraits of Septimius Severus (laureate head left) and Julia Domna (draped bust right with elaborate coiffure), beneath which is a Gupta Brahmi inscription in a characteristic square-serif style: Damputrasya Dhanguptasya ([Seal of] Dhangupta son of Dama). ....The use of gold, the method of fabrication, and the fine quality of the engraving all suggest than the owner was a person of significant wealth and position....There was a tradition in north West India for Greek rulers to adopt Indian names. King Menander was called Milinda, .....Demetrios is called Dattamitri, Appollodotus is Apaladatas, Azes is Aya, Azilezes is Ayilisha, and Gondophares is Devarata Gudupphara. Therefore, it is not unlikely that the Damaputrasya on this ring meant the son of Dama or, more appropriately, the son of Domna -- Julia Domna herself whose picture is in situ..... The important person, the owner of the ring, thus associates himself with the Roman imperial family.".....http://www.cngcoins.com/Coin.aspx?CoinID=115376 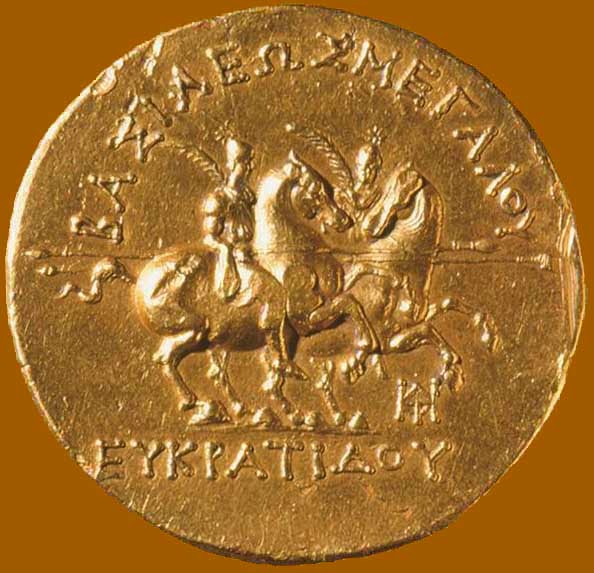 "One of the most famous ancient coins, the massive gold 20-stater of Eucratides, now in the collection of the National Library in Paris, was surely also the largest gold coin minted in antiquity. It may well have been a victory medal to celebrate Eucratides's conquest of "India," presumably some land south of the Hindu Kush, perhaps Gandhara....Eucratides was the last Greek king to rule at Ai-Khanoum, which was overrun most probably by the Yuezhi, the tribes that later coalesced into the Kushans. "...http://coinindia.com/galleries-eucratides1.html

"Göbl’s interest in ancient oriental numismatics extended beyond the geographical limits of the Sasanian state. Prompted by Franz Altheim, he published in 1957 an article about Kushano-Sasanian coinage that eventually became the groundwork for his Dokumente zur Geschichte der iranischen Hunnen in Baktrien und Indien (4 vols, Wiesbaden, 1967), a major contribution that revived a fascinating chapter in Asian history and that will undoubtedly remain as one of the milestones in the study of Oriental numismatics. Roman Ghirshman (q.v.) arranged for Göbl’s participation at the second Kanishka conference, which was held in London in 1960. This conference induced Göbl to make the coinage of the Kushans the central part of all his future research. In 1984, he published his monograph on the system and chronology of Kushan coinage, in which he gave an in-depth commentary on its controversial chronology. He published another study of the subject, DONUM BURNS: Die Kušānmünzen im Münzkabinett Bern und die Chronologie (Vienna, 1993), which he considered his “Kushan testament.” At the request of the present writer, however, he made further studies of the chronology problem following the publication of the Rabatak inscription in 1996."......http://www.iranicaonline.org/articles/gbl-

"In 1962, Ghirshman brought Göbl to Afghanistan as a UNESCO field expert in order to arrange the coin collection at the Museum of Kabul. During the course of his stay Göbl also traveled to Pakistan and discovered that some of the inscriptions of the Tochi-Agency kept in the Museum of Peshawar were not written in Mongolian, as had previously been presumed, but in Bactrian. Helmut Humbach read the bilingual texts, and the double datings included in them from then on formed a central point in Göbl’s argument for considering year 1 of Kanishka’s rule to be 232 AD"..........http://www.iranicaonline.org/articles/gbl-

"The Kushan religious pantheon is extremely varied, as revealed by their coins and their seals, on which more than 30 different gods appear, belonging to the Hellenistic, the Iranian, and to a lesser extent the Indian world. Greek deities, with Greek names are represented on early coins. During Kanishka's reign, the language of the coinage changes to Bactrian (though it remained in Greek script for all kings). After Huvishka, only two divinities appear on the coins: Ardoxsho and Oesho.".....wikipedia.org/wiki/Kushan_coinage

"A tamga or tamgha "stamp, seal" (Mongolian: tamga, Turkish: damga) is an abstract seal or stamp used by Eurasian nomadic peoples and by cultures influenced by them. The tamga was normally the emblem of a particular tribe, clan or family. They were common among the Eurasian nomads throughout Classical Antiquity and the Middle Ages (including Alans, Mongols, Sarmatians, Scythians and Turkic peoples).....Similar "tamga-like" symbols were sometimes adopted by sedentary peoples adjacent to the Pontic-Caspian steppe both in Eastern Europe and Central Asia. Archaeologists prize tamgas as a first-rate source for the study of present and extinct cultures."......Yatsenko, S. A., "Tamga-signs of Iranic-speaking peoples of antiquity and the early medieval period"....Moscow (2001). 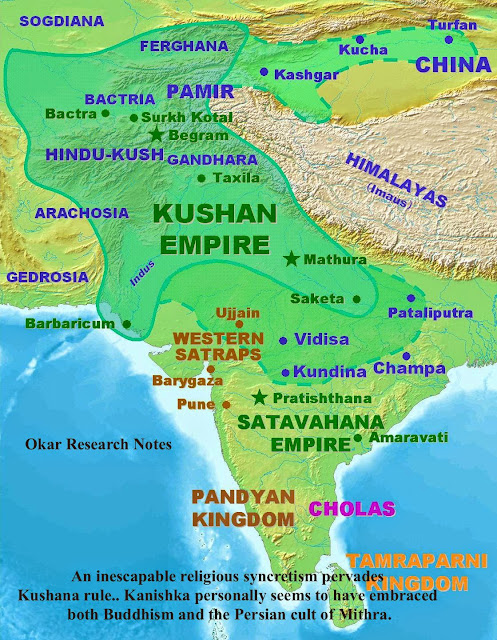