"Moksha, also spelled mokṣa, also called mukti, in Indian philosophy and religion, liberation from the cycle of death and rebirth (samsara). Derived from the Sanskrit word muc (“to free”), the term moksha literally means freedom from samsara. This concept of liberation or release is shared by a wide spectrum of religious traditions, including Hinduism, Buddhism, and Jainism......Alternate titles: apavarga; mukti."....http://www.britannica.com/EBchecked/topic/387852/moksha

".....the concept of moksa appears much later in ancient Indian literature than the concept of dharma. The proto-concept which appears all along most of the Upanishads, specially the later ones, is “mucyate” which means liberate, free; so the word itself “moksa” is rarely seen. On the other hand, in Hinduism, as Gavin Flood appoints, dharma and moksa, being the most important asramas or stages of Hindu life, remain in tension most of the time, specially all along the vedic literature."......from: 'Moksa – The soma of knowledge in the Upanishads' -by Ana Pinilla (April 2015).

"Fanaa : Sufism).......Fanaa (Arabic: فناء‎ fanāʾ ) is the Sufi term for "passing away" or "annihilation" (of the self) or extinction..... It means to annihilate the self, while remaining physically alive. Persons having entered this state are said to have no existence outside of, and be in complete unity with, Allah. Fanaa is equivalent to the concept of nirvana in Buddhism, Sikhism and Hinduism or moksha in Hinduism which also aim for annihilation of the self or mukhti in Sikhism......The nature of fanaa consists of the elimination of evil deeds and lowly attributes of the flesh. In other words, fanaa is abstention from sin and the expulsion from the heart of all love other than the Divine Love; expulsion of greed, lust, desire, vanity, show, etc. In the state of fanaa the reality of the true and only relationship asserts itself in the mind.".....Fana represents a breaking down of the individual ego and a recognition of the fundamental unity of God, creation, and the individual self.."The state of Fana is represented by Rumi in Book Six of the Masnavi ."

"About the middle of the 1st millennium BC, new religious movements spreading along the Ganges River valley in India promoted the view that human life is a state of bondage to a recurring process of rebirth..... These movements spurred the eventual development of the major religions of Buddhism, Jainism, and Hinduism. These and many other religious traditions offered differing conceptions of bondage and diverging paths to moksha. Some, such as Jainism, posited an abiding self that became liberated, while others, such as Buddhism, denied the existence of a permanent self......Some Indian traditions also place greater emphasis within their respective paths to liberation on concrete, ethical action within the world. Devotional religions such as Vaishnavism, for example, present love and service to God as the one sure way to moksha. Others stress the attainment of mystical awareness. Some forms of Buddhism and the monistic theologies of Hinduism—e.g., Advaita (non-dualistic) Vedanta—consider both the mundane world and human entrapment within it to be a web of illusion whose penetration requires both mental training through meditative techniques and the attainment of liberating insight. In this case, the passage from bondage to liberation is not a real transition but an epistemological transformation that permits one to see the truly real behind the fog of ignorance.....Some traditions present the plurality of Indian religions as different paths to moksha. More frequently, however, one tradition will understand its rivals as lower and less effective paths that ultimately must be complemented with its own.".......Patrick Olivelle.........http://www.britannica.com/EBchecked/topic/387852/moksha

"Indian spirituality is other-worldly, the goal being the attainment of a state of eternal existence beyond the cosmos - nirvana or moksha (liberation). The Indian ideal is the renunciate sage - the sadhu or sanyasin - who gives up the world for a life as a homeless yogi and holy-man, dependent on the offerings of others for sustenance. Hence Indian Tanta is orientated to attaining a transcendent state of Liberation......Taoist & Chinese culture and spirituality is generally this-worldly. The ideal sage is the Confucian"gentleman"or"superior man", who knows the best way to respond to family, social, or political situations. And although there is a quietest element to the Chinese soul (just as there is an extroversive one to the Indian) one finds that even Chinese meditation is this-worldly: the cultivation of the vital-force for health and longevity for example (Tai-Chi-Chuan), the search for alchemical immortality, or attuning oneself to the currents or flow of the cosmos."......www.kheper.auz.com/#sthash.UH9YiBe0.dpuf

"How are Dzodgchen, Mahamudra, and Moksha of Hinduism different?......'Moksha, as I understand it – is the highest Hindu expression of enlightenment. The difference between this and the Buddhist versions such as those approaches named above, is basically, the cultivation of bodhicitta. In practical terms, moksha represents an initial liberation from the drama of the ego-illusion, a radical awakening to non-dual truth, very similar to what is realized by sravakas who mature into arhats. According to the Nyingmas, this realization would be classified within the first two yanas. The short version of the Mahayana critique of the lower vehicles is that the wisdom element is emphasized at the expense of compassion.....From the perspective of Dzogchen, Mahamudra is a sublime preliminary, associated with the seventh and eighth yanas.......Dzogchen is a transmission which goes beyond the teachings of buddhism but is so resonant with Buddhadharma that it is considered the highest among the nine yanas .".....http://www.hologramthoughts.com/dharma/are-dzodgchen-mahamudra-and-moksha-essentially-the-same/

".....early Vedic Hinduism was primarily focused on maintaining the order (dharma ) in this world through sacrificial offerings to the gods with a sophisticated ritualism officiated exclusively by the brahmins. The Upanishads are a quantum leap from this conception since they turn the focus towards the goal of attaining personal liberation (moksa)."..........from: 'Moksa – The soma of knowledge in the Upanishads' -by Ana Pinilla (April 2015).

"Moksa for Islam means going to Jenna or Heaven after death....."

"A key concept in Jain beliefs is that the world or reality is made of two distinct dimensions:
- the visible world – made up of souls in their various forms, matter, space, the principles of motion and rest, time – it is eternal and formless, continually in the process of change but is indestructible
- the invisible world – a realm behind the visible world, unperceived by the senses – an indestructible and eternal realm of limitless knowledge and infinite power, a pure state of “release” or moksha....the primary goal of Jainism is the perfection of the soul – for it to be perfected from the all its layers of karma, from its current place in the visible world to the invisible world. Thus, moksha is the ultimate goal.."...http://www.world-religions-professor.com/karmabody.html. 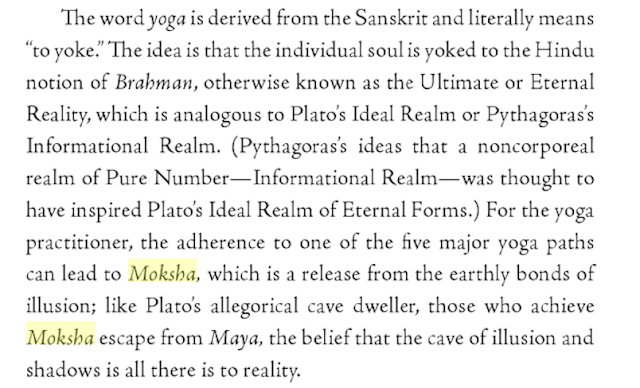 How Plato and Pythagoras Can Save Your Life: The Ancient Greek Prescription for Health and Happiness........by Nicholas Kardaras.....2011

"The teachings of Yajñvalkya (c. 700 BC), in the Brihadaranyaka Upanishad are the oldest teachings of moksa in Hinduism.....The Brihadaranyaka Upanishad is one of the Upanishads which elaborates in more detail not only the theory of transmigration but the concept of liberation: “ Thus does the man who desires transmigrates. But as to the man who does not desire—who is without desire, who is freed from desire, whose desire is satisfied, whose only object of desire is the Self—his organs do not depart.....Rishi Yajnavalkya, give also an advance of the necessity of yogic discipline in one of the earliest Upanishads, the Brhadaranyaka Upanishad, where he speaks of the need of purifying the heart to attain liberation and of the method of such purification: "The purification of the heart is the duty of all aspirants, especially of world-renouncing sannyasins; for this is the means of cultivating knowledge which leads to the freedom of the soul. As a mirror stained with impurities cannot reflect an image, so the impure heart cannot reflect Self-Knowledge”.......from: 'Moksa – The soma of knowledge in the Upanishads' -by Ana Pinilla (April 2015).

"Nirvāṇa (Sanskrit: निर्वाण; Pali: निब्बान nibbāna ; Prakrit: णिव्वाण) literally means "blown out", as in a candle. It is most commonly associated with Buddhism.....In the Buddhist context nirvana refers to the imperturbable stillness of mind after the fires of desire, aversion, and delusion have been finally extinguished. In Hindu philosophy, it is the union with Brahman, the divine ground of existence, and the experience of blissful egolessness. In Indian religions, the attainment of nirvana is moksha, liberation from samsara, the repeating cycle of birth, life and death......

Bardo Thodol (Tibetan: བར་དོ་ཐོས་གྲོལ, Wylie: bar do thos grol), Liberation Through Hearing During the Intermediate State....BAR-DO THOS-GROL (properly Bar-do Thos- grol chen-mo .....The Tibetan word bardo (བར་དོ་ Wylie: bar do) means literally "intermediate state"—also translated as "transitional state" or "in-between state" or "liminal state". In Sanskrit the concept has the name antarabhāva. It is a concept which arose soon after the Buddha's passing, with a number of earlier Buddhist groups accepting the existence of such an intermediate state, while other schools rejected it......ཐོས་གྲོལ་.....liberation through hearing {thos pas grol ba} liberation by hearing; that which liberates when heard......thos: hear; listen; hearing.....grol: (གྲོལ་ )released; loosened; freed, mukta; mukti; vimukti; vimokSa.