"Suśruta (Devanagari सुश्रुत, an adjective meaning "very famous") was an ancient Indian surgeon commonly credited as the author of the treatise Sushruta Samhita.....He is said to have been a physician originally active in Varanasi. His period is usually placed between the period of 1200 BC - 600 BC.....One of the earliest known mention of the name is from the Bower Manuscript (4th or 5th century), where Sushruta is listed as one of the ten sages residing in the Himalayas..... Texts also suggest that he learned surgery at Kasi from Lord Dhanvantari, the god of medicine in Hindu mythology."

"Sushruta, one of the earliest surgeons of the recorded history (600 B.C.) is believed to be the first individual to describe plastic surgery. Sushruta who lived nearly 150 years before Hippocrates vividly described the basic principles of plastic surgery in his famous ancient treatise 'Sushruta Samhita' more than 2500 years ago.".....https://ispub.com/IJPS/4/2/8232

"The great early Ayurvedic doctor, Sushrut, mentions 24 Soma plants, growing mainly on Himalayan lakes and named after Vedic meters. He mentions 18 additional Soma like plants, which are mainly nervine herbs. Soma, therefore, was likely part of an entire science of sacred plant preparations and not just one plant in particular. A number of Soma-producing and Somalike plants existed. The search for one single Soma plant is therefore misleading."....http://vedanet.com/2012/06/13/the-secret-of-the-soma-plant/

"The mythico-religious shlokas (hymns) associated with this civilization were compiled in Sanskrit language between 3000 and 1000 B.C. in the form of Vedas, the oldest sacred books of the Hindu religion. This era is referred to as the Vedic period (5000 years B.C) in Indian history during which the the four Vedas, namely the Rigveda, the Samaveda, the Yajurveda, and the Atharvaveda were compiled. All the four Vedas are in the form of shlokas (hymns), verses, incantations and rites in Sanskrit language.3 ‘Sushruta Samhita' is believed to be a part of Atharvaveda. ....‘Sushruta Samhita'(Sushruta's compendium), which describes the ancient tradition of surgery in Indian medicine is considered as one of the most brilliant gems in Indian medical literature. This treatise contains detailed descriptions of teachings and practice of the great ancient surgeon Sushruta which has considerable surgical knowledge of relevance even today."....https://ispub.com/IJPS/4/2/8232

"The exact period of Sushruta is unclear but most scholars put him him between 600 to 1000 BC......Sushruta lived, taught and practiced his art in the area that corresponds presently to the city of Varanasi (Kashi, Benares) in northern part of India. "

"...This master literature remained preserved for many centuries exclusively in the Sanskrit language which prevented the dissemination. of the knowledge to the west and other parts of the world. Later the original text was lost and the present extant one is believed to be a revision by the Buddhist scholar Vasubandhu (circa AD 360-350). In the eighth century A.D., ‘Sushruta Samhita' was translated into Arabic as Kitab-Shaw Shoon-a-Hindi and Kitab-i-Susrud. The translation of ‘Sushruta Samhita' was ordered by the Caliph Mansur (A.D.753 -774)..... One of the most important documents in connection with ancient Indian medicine is the Bower Manuscript, a birch-bark medical treatise discovered in Kuchar (in Eastern Turkistan), dated around AD 450 and is housed in the Oxford University library..... The first European translation of ‘Sushruta Samhita' was published by Hessler in Latin and into German by Muller in the early 19th century. The first complete English translation was done by Kaviraj Kunja Lal Bhishagratna in three volumes in 1907 at Calcutta."......https://ispub.com/IJPS/4/2/8232

"The Bower Manuscript is an early birch bark document, dated to the Gupta era (between the 4th and the 6th century). It is written in Buddhist Hybrid Sanskrit using the Late Brahmi script. The manuscript is notable for preserving one of the earliest treatises on Indian medicine (Ayurveda). Rudolf Hoernle (1910) suggested that the text of the manuscript contains excerpts of the (otherwise unknown) Bheda Samhita on medicine.The medical parts (I-III) constitute may be based on similar types of medical writings antedating the composition of the saṃhitās of Caraka, Suśruta, and as such rank with the earliest surviving texts on Ayurveda.....It is today preserved as part of the collections of the Bodleian Library in Oxford. "

"Captain H. Bower, who arrived in the Tarīm Basin in 1890 by order of the British Indian army, was at first not particularly interested in old manuscripts One day, however, he decided—perhaps on a whim—to buy an old manuscript for sale at a shop in the market ..... along the path which had served as the main route to enter the Tarīm Basin from Northern India. Probably Bower decided to buy the manuscript from a local man in Kucha .....this purchase, which would ignite the great era of exploration in Central Asia......The manuscript purchased by Bower was written in the Brāhmi script of ancient India. Deciphered by the British scholar of Indian studies, A. F. Rudolf Hoernle, it was revealed that the manuscript could be as old as the 5th century. It was older than any other manuscript found in India up till that time, and it came as a tremendous surprise that such old manuscripts were found in the outlying Tarīm Basin, rather than India."...... http://dsr.nii.ac.jp/rarebook/09/index.html.en 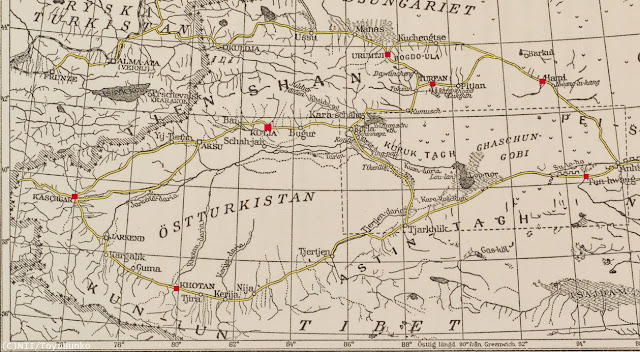 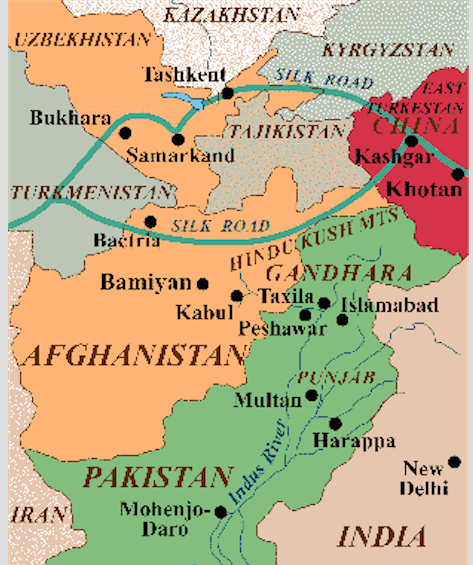 Soma...."The Sushruta Samhita localizes the best Soma in the upper Indus and Kashmir region.....In the Vedas, the same word is used for both the drink and the plant. Drinking Soma produces immortality (Amrita, Rigveda 8.48.3). Indra and Agni are portrayed as consuming Soma in copious quantities. The consumption of Soma by human beings is well attested in Vedic ritual.....According to Anthony, Soma was introduced into Indo-Iranian culture from the Bactria–Margiana Culture. .....among Indo-European immigrants in the contact zone between the Zeravshan River (present-day Uzbekistan) and (present-day) Iran....Vedic texts mention that the best soma plants came from Mount Mūjavant, which may be located as in northern Kashmir and in neighboring western Tibet"..........

"The traditional medical massage of Thailand, more commonly known as Thai Massage, is one of the world’s oldest healing modalities. It originated in India during the Buddha’s lifetime, over 2500 years ago, and was brought to this world by a saint, the “Father Doctor Shivago Komarpahj”, a contemporary of the Buddha and some say his personal physician and the physician to the King of India."......http://www.aitheinhealing.com/

Email ThisBlogThis!Share to TwitterShare to FacebookShare to Pinterest
Labels: History, Teachers, The Vedas