"Ölmo Lungring or Shambhala, this imperishable sacred land, which is the spiritual center of the world, existed on earth from the very beginning of the human race. It was the place where the celestial gods of the Clear Light (`od gsal lha) descended from heaven to earth in order to take up incarnation as human beings and ensoul the physical bodies which had been prepared for them.".....http://bonchildren.tonkoblako-9.net/en/jewel2/03.tan 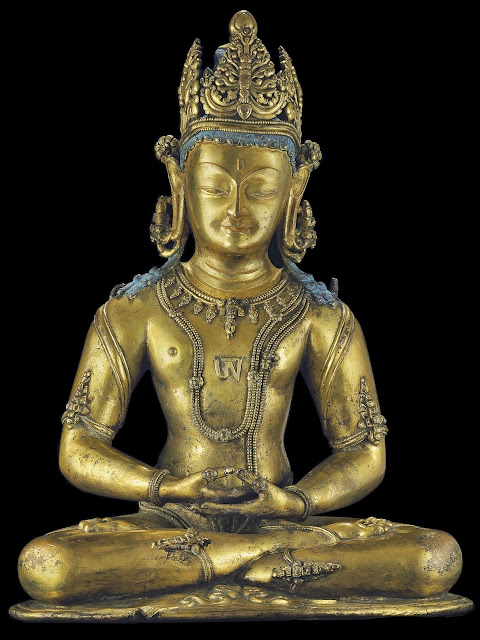 "In the Bönpo text dealing with cosmogony, theogony and cosmology, Chamma is called Sherab Chamma Chucham Byalmo, "the queen of the waters". Chucham Cyalmo had her origin from the primordial waters, an origin independent of the patriarchal order of heaven. As the winds of karma blew across the vast primeval ocean, moving its waters, a bubble the size of a pavilion rose up to the surface and at its center an egg of blue light became visible. When this egg spontaneously burst open, a turquoise blue woman appeared from it. The creator god Sangpo Bumtri was overwhelmed by her beauty and radiance; he called her by the name Chucham Gyalmo, "the queen of the waters". Thereafter they coupled together without their heads or their noses touching and from this act of union were produced the various species of animals and birds. And when they united a second time, bending their heads to each other and touching their noses, they produced the nine brothers and the nine sisters from who have descended the various races of gods. 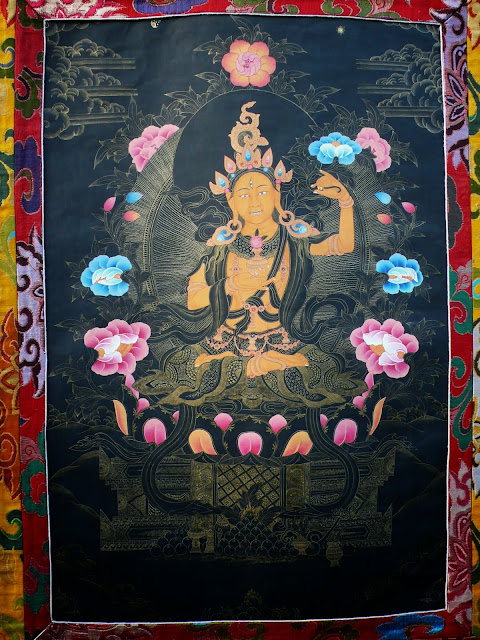 "The Greeks honored nine muses, who personified and inspired the full range of the arts and sciences of humankind.  Going back further in time, the Egyptians honored a company of nine “gods, “ or neteru, their Ennead of nine manifest principles, a trinity of trinities, which emerged from four pairs of unmanifest gods to oversee the world’s ongoing creative process.  The Egyptians saw the whole of humanity, which they symbolized by the glyphs for “nine archers’ bows,” as subject to the ninefold rule of the Ennead.  The pharaoh, their representative on earth, was often symbolized by nine bows.  This same symbol is referred to in the name of the vulture Mother Goddess Nekhebet, “she who binds the nine bows,” or unites all people and so was called “the father of fathers, the mother of mothers.”

"In the Rigveda, the Ādityas are the seven celestial deities, sons of Āditi, headed by Varuna, followed by Mitra (Vedic personification of Surya) :
Varuna... god of the sky, of water and of the celestial ocean.
Mitra (Surya)...some relation with the Zoroastrian divinity Mithra (Miθra)
Aryaman...creator of day and night, controls the movement of time.
Bhaga...god of wealth and marriage
Anśa or Aṃśa
Dhatri...god of health and domestic tranquility
Indra...god of rain and thunderstorms


Nine Gods of the Etruscans: Juno, Minerva, and Tin’ia (the three chief); the other six were Vulcan, Mars, and Saturn, Herculs, Summnus, and Vedius.

"By itself, Zurvanism is inherently non-dualistic, though some flaws could be seen. The gods of Zurvanism are the demons of the Vedanta: Asuras of Zurvanism (such as Ahura=Asura Mazda) are non-Suras (gods) of Vedas, as in both Sanskrit and Persian the prefix “a” stands for denial. Also compare: “Daeva” in Persian means demon, “Deva” in Sanskrit means god. 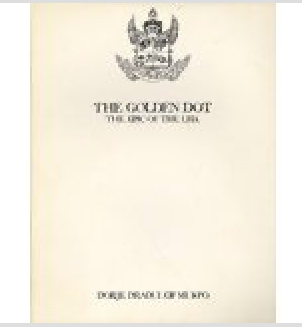 "In 1959, Chogyam Trungpa left Tibet, fleeing the invasion of the Chinese communists. It took him a long time to cross the Himalayas. On the way, he wrote a synthesis of the spiritual history of Shambala that was, unfortunately, lost during that eventful journey. It was partially re-written in England and first translated in 1971 in Vermont.......The Golden Dot Text describes Shiwa Okar and the Nine Lha who created existence out of non-existence.............In the Bon tradition the legend is known as Shen Lha Okar and the Nine Brothers who created this world.......

"In the case of the origins of the Tibetan people proper, they mention four tribes, sBra, lDong, •Bru and sGa; or five tribes, if they also include rGo; seven tribes, if they include the dPayi tshan and Zla yi tshan tribes separately, six if they group these two as a unit. In the case of Zhang Zhung, they refer to the ancestor Sangs-po •Bum-khri and to the four tribes that descended from the...... NINE Brothers and Sisters........ which together with the tribes dBal and Zla are known as the Six Human Clans [miêu gdung drug]. The texts describe the ways in which these various tribes intermingled, and maintain how for example the genealogies of Zhang Zhung derived from the sBra or Khyung tribes; they talk about their locations, the social changes that occurred in different periods of time, and the way in which various people with distinct local habits and customs eventually developed from those tribes. Many historical documents talk about four tribes, Se, rMu, lDong and sTong; in this case, Se, rMu, lDong and sTong are viewed as being the four original tribes, to which the dBra and •Dru tribes are added..... "

"In the heavenly realm were nine young warriors, the nine who created the world and ordered it, nine great artificers who fashioned existence out of non-existence......" 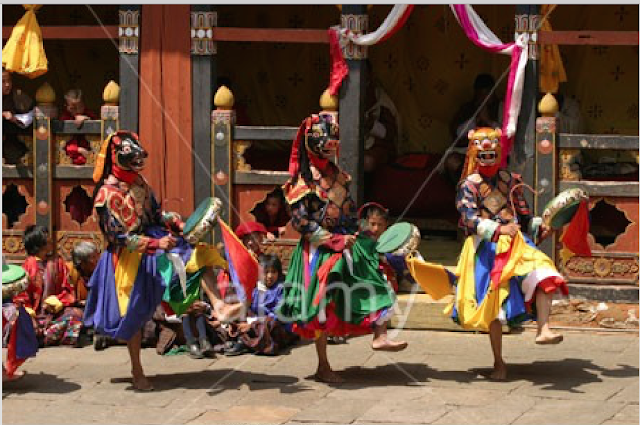 WERMA......."From the inner essence of the egg a miraculous man was born with a lion's head and lynx's ears, a fierce face with an elephant's trunk, the mouth of a chusin, and tiger's fangs. His feet were swords and his wings sabres, and between the flaming horns (rwa dbal) on the great Khyung's head he had the diadem of the wish-fulfilling jewell as an ornament. He was called 'heroic' WERMA NYINYA and was the fount of four distince ritual traditions. In fact from the union of the Werma with the Lha were born the 'Werma of the Lha that Subjugate the Dud'.......from the union with the Nyen, the 'Werma of the Nyen that Subjugate Enemies'......from the union with the Khyung, the 'Werma of the Khyung that Subjugate the Lu'....from the unioon with the divine Lions (seng) the 'Three Werma Brothers that Subjugate Heroes'.....From these four divine manifestations, which in turn emanated armed hordes of nine hundred and ninety thousand various Werma, originated the four systems of ritual practice devoted to the class of the Werma that, as is written in the Zijid, "all arose from the Lha, descended from the Se and are similar to the Wal.....and appeared in order to subjugate all hostile entities causing obstacles and disturbances." (Drung, Deu and Bon....1995..... page 55)

KAMI...."In Shinto, 'Kami' is a general term of respect for something holy and awesome, but it is not necessarily a word used specifically for a definite order of beings. Among the myriad things in the universe, sacred spirits and spiritual forces are recognized as existing and functioning, and these are termed specifically, 'kami'."...(Jinja: 1958..pg 15)...."Kami is a term best left untranslated. Kami may refer to the divine, sacred, spiritual and numinous quality or energy of places and things...deities of imperial and local mythology...spirits of nature and place...divine heroes, ancestors, rulers, and statesmen. Any object, place, or creature may embody or possess the quality or characteristic of kami."..(Bocking: 1995..pg 85)...

ENLIGHTENED GODS...."Bon not only distinguishes 'peaceful' and 'wrathful' deities, it also makes a fundamental distinction between deities who are 'enlightened' and deities who are 'of this world'." (Kvaerne: 1996..pg 24)

"In the case of Zhang Zhung, they refer to the ancestor Sangs-po •Bum-khri and to the four tribes that descended from the Nine Brothers and Sisters, which together with the tribes dBal and Zla are known as the Six Human Clans [miêu gdung drug]."

THE EIGHTEEN FOREBEARS OF MANKIND..... The myth continues by recounting how the ‘18 Brothers and Sisters, Ancestors of Mankind’ were born from Sidpa Sangpo Bumtri’s union with Chuchag Gyelmo, a woman miraculously born from an ‘egg of blue light’: The blue lake was stirred by the wind and a bubble the size of a tent was formed, from which was born an egg of blue light. When the egg hatched a blue woman appeared with her hair tied in 7 plaits that reached her armpits. Sangpo Bumtri gave her the name Köpa Chuchag Gyelmo. They then lay together, and from their union were born eighteen brothers and sisters, the ‘9 Primordial Males’ (srid pa pho dgu) and the ‘9 Primordial Females’ (srid pa mo dgu).
The 9 males were:
1. White Lord that Controls Existence (Smid rje ‘brang dkar);
2. Lord of Order with a White Staff (sKos rje drang dkar);
3. Lord of the Cha Dressed in White (Phywa rje ring dkar);
4. Powerful Narrator of the Divine Genealogies (iHa rabs gnyan mum rje);
5. Awakened Lord of the Mu (Thum thum mal med rje);
6. Lord that Governs the Atmosphere (sKyin dang ngar gyi rje);
7. Miraculous King of Primordial Knowledge (Ye mkhyen ‘phrul gyi rgyal);
8. Lord of the 100.000 Protector Deities of the Earth (Sa iha mgon ‘bum rje);
9. Lord of Plants and of the Cycle of Existence (IJon phyug ‘khor ba rje).
The 9 females were:
1. Ancestress Queen of the Sky (gNam phyi gung rgyal);
2. White Menmo of the Sky (gNam sman dkar mo);
3. Woman Who Does Not Talk (sMra ste mi mkhan nw mo);
4. Female Tiger (Za ma stug mo);
5. She who Develops and Strengthens (Shed za na ma);
6. Sharp Flaming Point (dBal so rnon mo);
7. She who Rides a Deer and Protects Livestock (Ya sha phyug ma); 8. Queen of the Cha and of Longevity (Phywa thse’i rgyal mo);
9. White Goddess (iHa mo dkar mo).
The various human races and generations then descended from each of these 18 ancestors, as described in Drenpa Namkha’s commentary.".......http://yungdrung-rignga-ling.forums-free.com/the-origin-of-existence-t667.html