"Nestorianism is a Christological doctrine advanced by Nestorius, Patriarch of Constantinople from 428–431. The doctrine, which was informed by Nestorius's studies under Theodore of Mopsuestia at the School of Antioch, emphasizes the disunion between the human and divine natures of Jesus. Nestorius' teachings brought him into conflict with some other prominent church leaders, most notably Cyril of Alexandria, who criticized especially his rejection of the title Theotokos ("Bringer forth of God") for the Virgin Mary. Nestorius and his teachings were eventually condemned as heretical at the First Council of Ephesus in 431 and the Council of Chalcedon in 451, leading to the Nestorian Schism in which churches supporting Nestorius broke with the rest of the Christian Church. Afterward many of Nestorius' supporters relocated to Sassanid Persia, where they affiliated with the local Christian community, known as the Church of the East. Over the next decades the Church of the East became increasingly Nestorian in doctrine, leading it to be known alternately as the Nestorian Church." 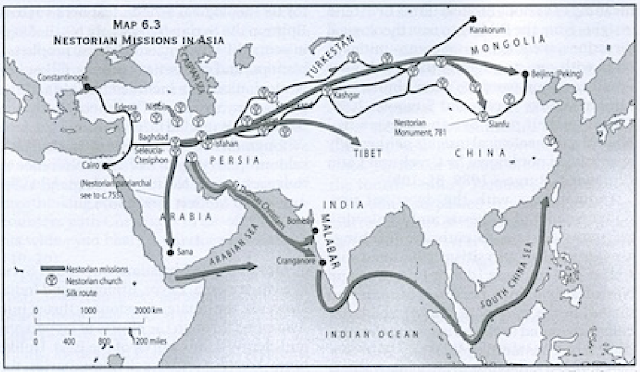 "Following the exodus to Persia, scholars expanded on the teachings of Nestorius and his mentors, particularly after the relocation of the School of Edessa to the Persian city of Nisibis in 489 (where it became known as the School of Nisibis). Nestorianism never again became prominent in the Roman Empire or later Europe, though the spread of the Church of the East in and after the 7th century spread it widely across Asia."

East Asian History Sourcebook: "Ch'ing-Tsing: Nestorian Tablet: Eulogizing the Propagation of the Illustrious Religion in China, with a Preface, composed by a priest of the Syriac ....."In the year of the Greeks one thousand and ninety-two, the Lord Jazedbuzid, Priest and Vicar-episcopal of Cumdan the royal city, son of the enlightened Mailas, Priest of Balkh a city of Turkestan, set up this tablet, whereon is inscribed the Dispensation of our Redeemer, and the preaching of the apostolic missionaries to the King of China."...Charles F. Horne, ed., The Sacred Books and Early Literature of the East, (New York: Parke, Austin, & Lipscomb, 1917), Vol. XII, Medieval China, pp. 381-392.

"Timothy I’s appointment of a bishop for Tibet during the reign of Trisong Detsen,......The best evidence of the involvement of Christian missionaries in early Tibet comes in the letters of Timothy I, who was Patriarch of the Nestorian Church between 780 and 823, overlapping with the reigns of three of Tibet’s great Buddhist emperors, Trisong Detsen, Senaleg and Ralpachen. Timothy I’s letters contain a couple of references to Tibet. In one letter, he lists the lands in which the Trisagion, one of the oldest Christian prayers, is recited. This list includes Tibet. In another letter, Timothy relates that he has recently appointed a metropolitan bishop for the Turks, and is about to do the same for the Tibetans. These references both date to the early 790s, during Trisong Detsen’s reign."....http://earlytibet.com/2007/12/02/christianity-in-early-tibet/ 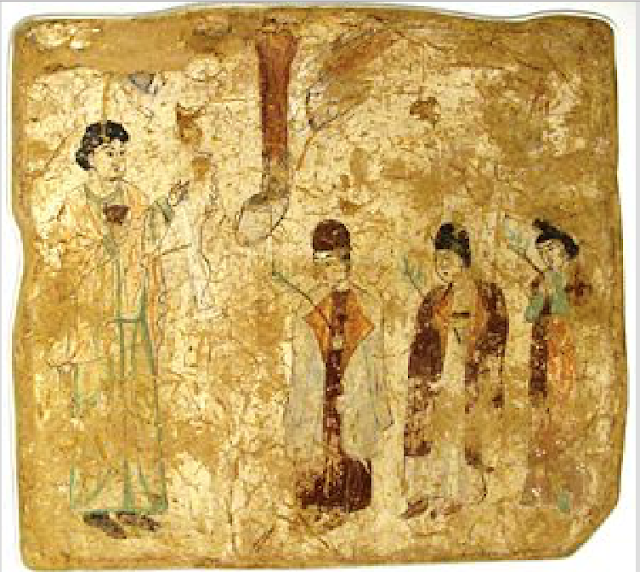 "Nestorian priests in a procession on Palm Sunday, in a 7th- or 8th-century wall painting from a Nestorian church in China."