"The musk routes: In Arabic literature from the 9th century onwards Tibet is frequently described as the land of musk. A variety of sources attest to the importance of the musk trading routes for the contacts between Islamic and Tibetan cultures. A comparison of the uses of musk in Islamic and Tibetan medicines revealed, for example, that alongside musk as a trading good, ideas of its use travelled as well.".....http://trade-routes-resources.blogspot.com/2010/04/islam-and-tibet-cultural-interactions.html 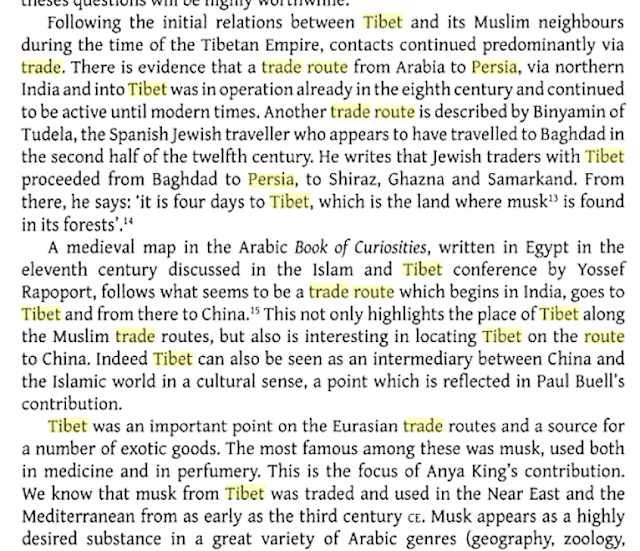 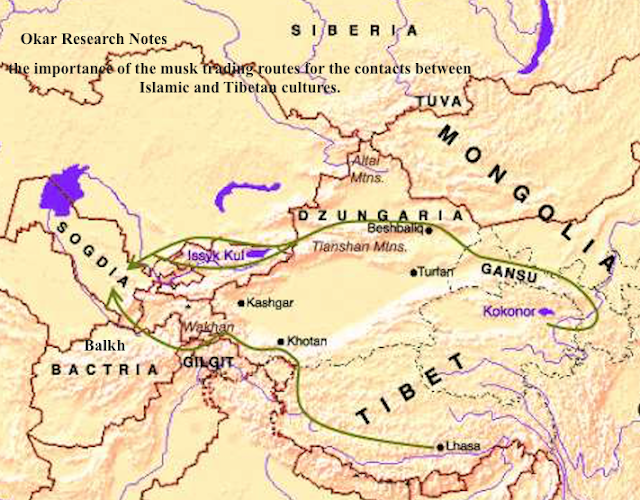 "The first encounters between the Islamic world and Tibet took place in the course of the expansion of the Abbasid Empire in the eighth century. Military and political contacts went along with an increasing interest in the other side. Cultural exchanges and the transmission of knowledge were facilitated by a trading network, with musk constituting one of the main trading goods from the Himalayas, largely through India. From the thirteenth century onwards the spread of the Mongol Empire from the Western borders of Europe through Central Asia to China facilitated further exchanges. The significance of these interactions has been long ignored in scholarship. .....explores for the first time the multi-layered contacts between the Islamic world, Central Asia and the Himalayas from the eighth century until the present day in a variety of fields, including geography, cartography, art history, medicine, history of science and education, literature, hagiography, archaeology, and anthropology."
.....Contents: Preface; Islam and Tibet: cultural interactions – an introduction, Ronit Yoeli-Tlalim; Tibet in Islamic geography and cartography: a survey of Arabic and Persian sources, Anna Akasoy; The Bactrian background of the Barmakids, Kevin van Bladel; Iran to Tibet, Assadullah Souren Melikian-Chirvani; Greek and Islamic medicines' historical contact with Tibet: a reassessment in view of recently available but relatively early sources on Tibetan medical eclecticism, Dan Martin; Tibetan musk and medieval Arab perfumery, Anya King; The Sarvastivadin Buddhist scholastic method in medieval Islam and Tibet, Christopher I. Beckwith; Notes on the religions in the Mongol empire, Peter Zieme; Tibetans, Mongols and the fusion of Eurasian cultures, Paul D. Buell; Three rock-cut cave sites in Iran and their Ilkhanid Buddhist aspects reconsidered, Arezou Azad; The Muslim Queens of the Himalayas: princess exchanges in Baltistan and Ladakh, Georgios T. Halkias; The discovery of the Muslims of Tibet by the first Portuguese missionaries, Marc Gaborieau; So close to Samarkand, Lhasa: Sufi hagiographies, founder myths and sacred space in Himalayan Islam, Alexandre Papas; Between legend and history: about the 'conversion' to Islam of two prominent Lamaists in the 17th-18th centuries, Thierry Zarcone; Ritual theory across the Buddhist-Muslim divide in late imperial China, Johan Elverskog; Trader, middleman or spy? The dilemmas of a Kashmiri Muslim in early 19th-century Tibet, John Bray; Do all the Muslims of Tibet belong to the Hui nationality?, Diana Altner; Greater Ladakh and the mobilization of tradition in the contemporary Baltistan movement, Jan Magnusson; Index of proper names."
........Islam and Tibet – Interactions along the Musk Routes......Published: December 2010......Edited by Anna Akasoy, Oriental Institute, University of Oxford, UK; Charles Burnett, Warburg Institute, University of London, UK and Ronit Yoeli-Tlalim, Wellcome Trust University Award holder, Department of History, Goldsmiths, University of London, UK

“The Muslim Queens of the Himalayas: Princess Exchange in Ladakh and Baltistan.” In Islam-Tibet: Interactions along the Musk Routes, eds. Anna Akasoy et al. Ashgate Publications.

Along the Musk Routes. Exchanges between Tibet and the Islamic World.’ In Asian Medicine: Tradition and Modernity 3/2 (2007), pp. 217-40 (with Ronit Yoeli-Tlalim)........"Musk was the most important trading good from Tibet in the Islamic world where it was highly prized due to its aphrodisiac effect. As in the lands where it came from, musk was used in the Middle East for medical purposes. This article compares medical uses of musk in Tibetan and Islamic medicines and explores ways of the transmission of medical knowledge along the trading routes, presenting the novel concept of ‘Musk Routes’ following the model of the Silk Roads."

‘Dying of Laughter in Lhasa. Tibet in Islamic Geography’ ....Among the most popular themes in descriptions of Tibet in Arabic and Persian literature was the happiness of its people. This article explores the theme and contextualises it within the literary aspects of Islamic geography.....http://warburg.sas.ac.uk/research/projects/islam-tibet/publications/