"The enlightenment of the Buddha, realized through his own effort, was confirmed by the earth....".....http://buddhism.about.com/od/eightauspicioussymbols/a/earthwitness.htm 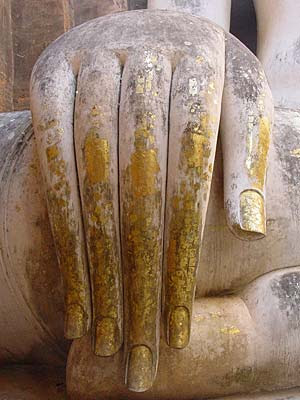 "Most of the numerous invaders of Shambhala were more interested in conquering the Earth than touching the earth."

The "earth witness" Buddha is one of the most common iconic images of Buddhism. It depicts the Buddha sitting in meditation with his left hand, palm upright, in his lap, and his right hand touching the earth. This represents the moment of the Buddha's enlightenment."

"Why do emergent selves, virtual identities, pop up all over the place, creating worlds, whether at the mind/body level, the cellular level, or the transorganism level? This phenomenon is something so productive that it doesn't cease creating entirely new realms: life, mind, and societies. Yet these emergent selves are based on processes so shifty, so ungrounded, that we have an apparent paradox between the solidity of what appears to show up and its groundlessness. That, to me, is the key and eternal question." FRANCISCO VARELA (1946 - 2001)

"The Tibetan people traditionally view the five elements of earth, water, fire, air and space as pervading all of life and as the essential components of our entire worldly existence. The soul (la) is said to be composed of these elements at a very subtle level — and it is believed that a traumatic event or other shock can cause an individual to lose connection with the elements and become dispirited. The ancient shamanic rites of soul retrieval (la gu) and life-force retrieval (tse gu) from the Mother Tantra of the Bon tradition are methods of calling on the living essence of the elements — the elemental spirits — to balance and heal the individual. ...Someone with a lot of fire may normally have a sense of joy, of creativity, of enthusiasm, while still maintaining some sense of stability from the earth element and flexibility from the air element, for example. But when there is an imbalance of the elements, the person will not feel the same. They may feel unhappy, with no desire to do things, and no energy. If they live too long with that imbalance, over time they may become physically ill."...https://www.ligmincha.org/retreats/soul-and-life-force-retrieval.html

"The four elements of fire, water, air, and earth are the basis of many magical and spiritual systems: the native American medicine wheel, the four corners of pagan European ritual, the four elements of alchemical schools of ancient Egypt, and the four elements of astrology. Even the tarot deck and playing cards are based on these four elements whereby fire is wands (clubs), water is cups (hearts), air is words (spades), and earth is pentacles (diamonds).......Another way of dividing the cosmos into elemental energies is the ancient east Indian vedic system of the three doshas: vata (air/space), pitta (fire), and kapha (earth and water). Theses three doshas are used in Ayurvedic medicine in a system as fully developed as traditional Chinese medicine. But Chinese Taoist cosmology is structured on five, not four elements: fire, earth, metal, water, and wood. These five elements are the basis of Chinese metaphysics and philosophy and have practical applications including feng shui, astrology/astronomy, and traditional Chinese medicine......The element earth is yin, feminine, like Mother Earth in the West."

"The "earth witness" Buddha is one of the most common iconic images of Buddhism. It depicts the Buddha sitting in meditation with his left hand, palm upright, in his lap, and his right hand touching the earth. This represents the moment of the Buddha's enlightenment.....Just before the historical Buddha, Siddhartha Gautama, realized enlightenment, it is said the demon Mara attacked him with armies of monsters to frighten Siddhartha from his seat under the bodhi tree. But the about-to-be Buddha did not move. Then Mara claimed the seat of enlightenment for himself, saying his spiritual accomplishments were greater than Siddhartha's. Mara's monstrous soldiers cried out together, "I am his witness!" Mara challenged Siddhartha--who will speak for you?.....Then Siddhartha reached out his right hand to touch the earth, and the earth itself roared, "I bear you witness!" Mara disappeared. And as the morning star rose in the sky, Siddhartha Gautama realized enlightenment and became a Buddha."...http://buddhism.about.com/od/eightauspicioussymbols/a/earthwitness.htm 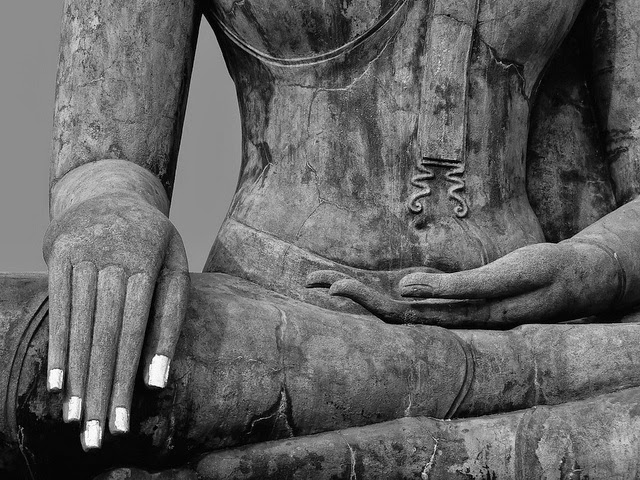 "The Earth Witness Mudra.....A mudra in Buddhist iconography is a body posture or gesture with special meaning. The earth witness mudra is also called the Bhumi-sparsha ("gesture of touching the earth") mudra. This mudra represents unshakability or steadfastness. The Dhyani Buddha Akshobhya also is associated with the earth witness mudra because he was immovable in keeping a vow never to feel anger or disgust at others......The mudra also symbolizes the union of skillful means (upaya), symbolized by the right hand touching the earth, and wisdom (prajna), symbolized by the left hand on the lap in a meditation position."......Earth Witness:Meaning of the Earth Witness Mudra.....By Barbara O'Brien 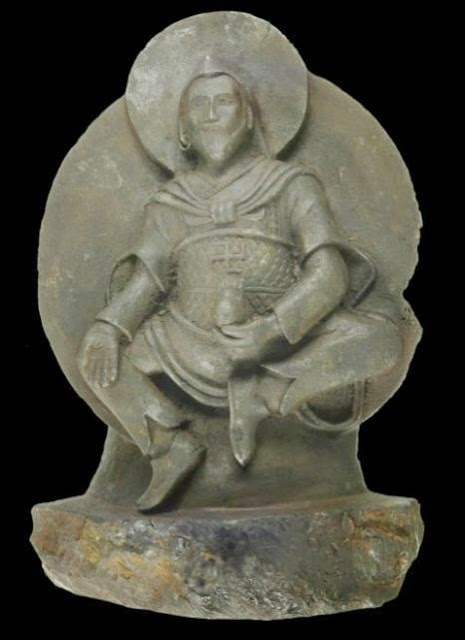 "The Iron Man statue was carved from a meteorite that struck Earth 15,000 years ago...A 1,000-year-old statue of a Buddhist figure with a swastika on its stomach that was taken from Tibet...The statue, which has been dated to between the eighth and tenth centuries, was brought back to Germany in 1938 by Ernst Schafer after the Nazis sponsored a series of archaeological digs to help establish a predetermined history of the Aryan race."... Dr Elmar Buchner from Stuttgart University 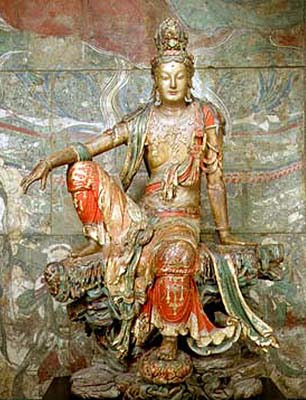 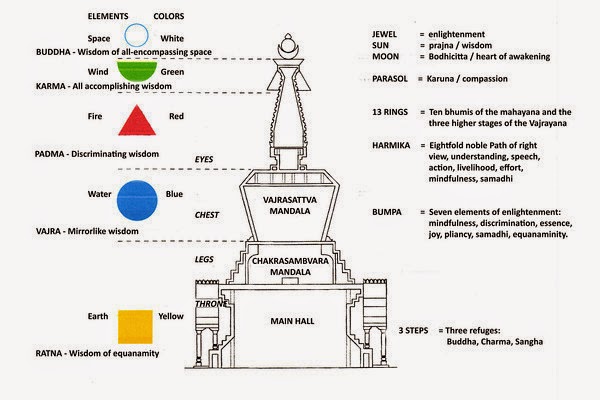