Alexandria in the Caucasus Indicus : Kapisa (323 BC)

"The Hindu Kush (/kʊʃ, kuːʃ/; Pashto/Persian/Urdu: هندوکش‎), also known as Pāriyātra Parvata (Sanskrit: पारियात्र पर्वत), Caucasus Indicus, or Paropamisadae (ancient Greek: Παροπαμισάδαι), is an 800 km (500 mi) long mountain range that stretches between central Afghanistan and northern Pakistan. It is a subrange of the Hindu Kush Himalayan range.It divides the valley of the Amu Darya (the ancient Oxus) to the north from the Indus River valley to the south......The highest point in the Hindu Kush is Tirich Mir (7,708 m or 25,289 ft) in Chitral District of Khyber Pakhtunkhwa, Pakistan. To the east the Hindu Kush buttresses the Pamir range near the point where the borders of China, Pakistan and Afghanistan meet, after which it runs southwest through Pakistan and into Afghanistan, finally merging into minor ranges in western Afghanistan. The mountain range separates Central Asia from South Asia." 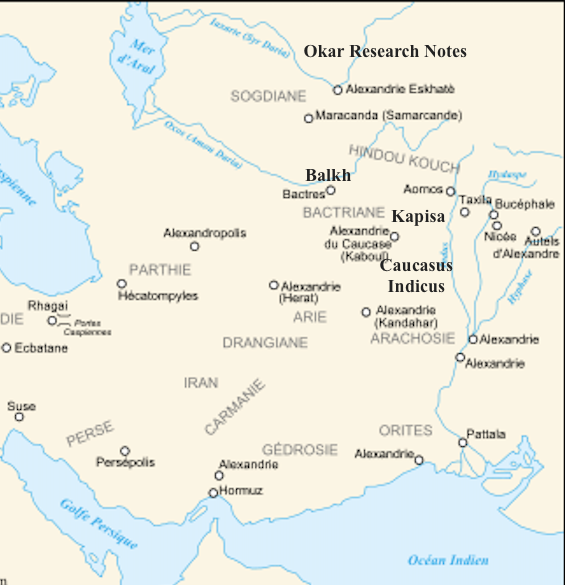 "Alexandria on the Caucasus (medieval Kapisa, modern Bagram) was a colony of Alexander the Great (one of many colonies designated with the name Alexandria). He founded the colony at an important junction of communications in the southern foothills of the Hindu Kush mountains, in the country of the Paropamisade."

Note: In Classical times, the Hindu Kush were also designated as the "Caucasus Indicus" in parallel to their Western equivalent, the Caucasus Mountains between Europe and Asia.

Alexandria of the Caucasus was one of the capitals of the Indo-Greek kings (180 BC-AD 10). During the reign of Menander I the city was recorded as having a thriving Buddhist community, headed by Greek monks. 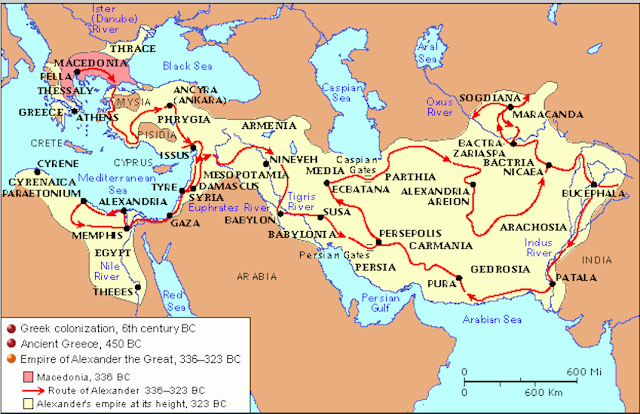 The Empire of Alexander the Great...Click on the map to enlarge

"Alexander needed a strong base for his crossing of the Hindu Kush, and founded a city, which, as usual, was called Alexandria. The city was in fact a refoundation of an Achaemenid settlement called Kapisa. About 4,000 native inhabitants were allowed to stay, and 3,000 Macedonian and Greek veterans were added. Later, more people were settled in the city, which must have been seen as a punitive colony by the Europeans who were left there. Still, the waters of the Kabul, Panjshir, and Khorband rivers created a fertile alluvial plain, and the city was to become very prosperous.

"Alexandria-Kapisa has been identified and partly excavated on a hill near Begram -or to be more precise, near Charikar-, 65 km north of modern Kabul. Not many finds date back to the age of Alexander, but the identification is uncontested. A brief description of Kapisa is offered by the Chinese traveler Xuan Zang (603-664), a Buddhist pilgrim who visited the area much later, but before the rise of Islam changed everything. He saw the city well built by the Macedonians (3 km long) and mentioned that the country produced all kinds of fruit, wheat, and other cereals. Xuan Zang also mentions to the high, snow-covered mountains. The Macedonians and Greeks had called them the Caucasus, the name they gave to the large mountain range that divided Asia into a northern and a southern half.

"After the death of Alexander in 323 BC, Alexandria remained an important city, but in 303 BC, one of Alexander's Successors, Seleucus I Nicator, gave it to the Indian king Chandragupta Maurya as part of a bargain in which he received 500 elephants. The city, which called itself Kapisa again, now belonged to the Mauryan Empire, but when it fell apart, it was captured by a Graeco-Bactrian army (184 BCE), and included in a new, Indo-Greek kingdom.....This was a multi-ethnic state, in which Greeks, Bactrians, western Iranians and Indians lived together. Greek religious practices, Iranian cults, Hinduism and Buddhism are all known from second-century Gandara. Coins were modeled on the drachmas of Athens, although they often had Indian legends.......After c.125 BC, an invasion of the Sacae, nomads from Central Asia, led to a new dynasty, but the multicultural society remained as it had always been. It also absorbed the Parthians, who became interested in the region in the first century BCE, and the Kushans, whose great leader Kanishka appears to have lived in the first half of the second century CE."

"The earliest references to Kapisa appear in the writings of 5th Century BC Indian scholar Pāṇini. Pāṇini refers to the city of Kapiśi, a city of the Kapisa kingdom, modern Bagram. Pāṇini also refers to Kapiśayana, a famous wine from Kapisa. The city of Kapiśi also appeared as Kaviśiye on Graeco-Indian coins of Apollodotus I and Eucratides."

"According to the scholar Pliny, the city of Kapiśi (also referred to as Kaphusa by Pliny's copyist Solinus and Kapisene by other classical chroniclers) was destroyed in the sixth century BC by the Achaemenid emperor Cyrus (Kurush) (559-530 BC).

"Based on the account of the Chinese pilgrim Hiuen Tsang, who visited in AD 644, it seems that in later times Kapisa was part of a kingdom ruled by a Buddhist kshatriya king (Warrior King) holding sway over ten neighboring states, including Lampaka, Nagarahara, Gandhara, and Banu. Hiuen Tsang notes the Shen breed of horses from the area, and also notes the production of many types of cereals and fruits, as well as a scented root called Yu-kin. 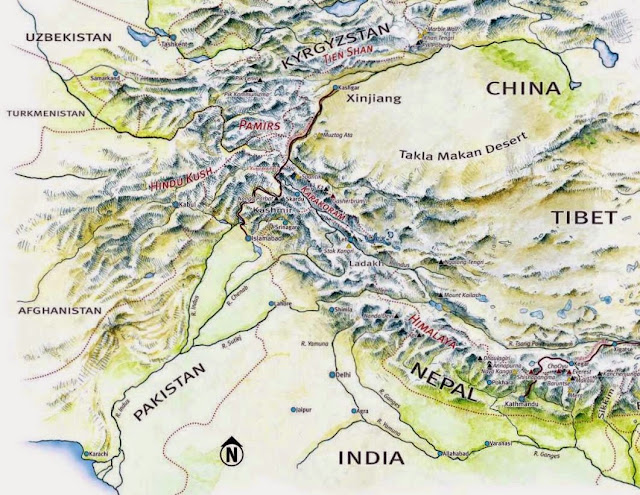 "In the ancient geography there was a notion that Caucasus and Hindu Kush are part of the same big mountain ridge (called Parapamisus) that crosses the continent from Asia Minor to the Eastern Ocean. According to Arrian the name was given by the soldiers of Alexander:........" In Bactria it unites with mount Parapamisus, which the Macedonians who served in Alexander’s army called Caucasus, in order, as it is said, to enhance their king’s glory; asserting that he went even beyond the Caucasus with his victorious arms. Perhaps it is a fact that this mountain range is a continuation of the other Caucasus in Scythia, as the Taurus’ is of the same. For this reason I have on a previous occasion called this range Caucasus, and by the same name I shall continue to call it in the future" (Anabasis, book 5b, ch. V)......He gives also another interesting detail: "... just as the Macedonians called Parapamisus by the name of Caucasus, though it has nothing to do with Caucasus. And besides, learning that there was a cave among the Parapamisadae, they said that this was the cave of Prometheus the Titan, in which he was crucified for his theft of the fire" (Book VIII: Indica, V). .....Ardavarz 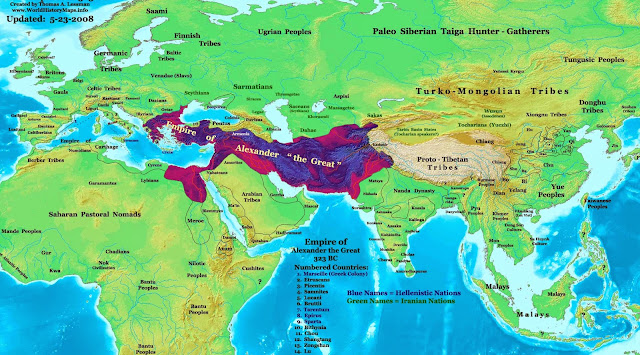 Dharma Fellowship of His Holiness the 17th Gyalwa Karmapa, Urgyen Trinley Dorje......"In 672 an Arab governor of Sistan, Abbad ibn Ziyad, raided the frontier of Al-Hind and crossed the desert to Gandhara, but quickly retreated again. The marauder Obaidallah crossed the Sita River and made a raid on Kabul in 698 only to meet with defeat and humiliation. Vincent Smith, in Early History of India, states that the Turkishahiya dynasty continued to rule over Kabul and Gandhara up until the advent of the Saffarids in the ninth century. Forced by the inevitable advance of Islam on the west, they then moved their capital from Kapisa to Wahund on the Indus, whence they contin­ued as the Hindushahiya dynasty. This was in 870 A.D. and marks the first time that the Kingdom of ShambhalaA actually came under Moslem domination. The Hindushahis recaptured Kabul and the rest of their Kingdom after the death of the conqueror Yaqub but never again maintained Kapisa as their capital.".....http://www.dharmafellowship.org/biographies/historicalsaints/lord-padmasambhava.htm#eightcentury