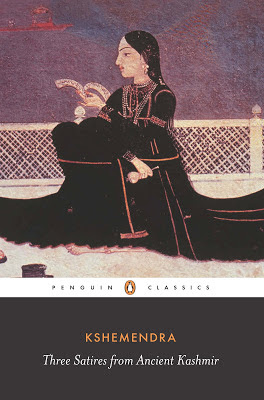 "Kshemendra (990 – 1070 AD ) .....Born into an old, cultured, and affluent family, both his education and literary output were broad and varied. He studied literature under "the foremost teacher of his time, the celebrated Shaiva philosopher and literary exponent Abhinavagupta". He also studied — and wrote about — both Vaishnavism and Buddhism. His literary career extended from at least 1037 (his earliest dated work, Brihatkathāmanjari, a verse summary of the lost "Northwestern" Bṛhatkathā; itself a recension of Gunadhya's lost Bṛhatkathā — "Great Story") to 1066 (his latest dated work, Daśavataracharita, "an account of the ten incarnations of the god Visnu"). In addition to the genres listed below, Kshemendra also composed plays, descriptive poems, a satirical novel, a history, and possibly a commentary on the Kāma Sūtra (all now known only through references in other works).".

"Tibetan histories and works on Kala Chakrait may be conjectured that this S'ambhala, very probably, was the capital of the Bactrian Empire of the Eastern Greeks who had embraced Buddhism. It is also conjectured that the modern city of Balkh must have been the site of their latest capital. The name of King Menander {Minendra) who erected a very lofty chaitya has been mentioned by the Kashmirian poet Ksomendra, in Avadānakalpalatā, a work that was finished iu about 1035 A.D."......http://archive.org/stream/grammaroftibetan00dass/grammaroftibetan00dass_djvu.txt

"A chaitya is a Buddhist shrine or prayer hall with a stupa at one end."

"These three satirical bhanas, or “causeries”, are the work of Kshemendra, a cosmopolitan scholar of the 11th century who studied under the famous Abhinavagupta. Kshemendra’s contribution to Sanskrit literature has only recently been fully appreciated: the first of the 34 works attributed to him was discovered in 1871. Eighteen have been found in total, of which several are technical and devotional works and four satirical. And Haksar, who translated these three satires, has already done much to establish the poet’s reputation beyond the academic community with his translation of the Samaya Matrika or The Courtesan’s Keeper, a sustained satirical narrative about a shape-shifting pimp. These three satires, also set in Kshemendra’s native Kashmir, paint a similar picture of a society in hot pursuit of money and sex, preferably combined." ....http://venetiaansell.wordpress.com/2011/10/18/kshemendra-three-satires-from-ancient-kashmir/

"Abhinavagupta (Kashmiri: अभिनवगुप्त) (Urdu: ابھینوگپتا ‎) (c. 950 – 1020 AD) was considered an important musician, poet, dramatist, exegete, theologian, and logician - a polymathic personality who exercised strong influences on Indian culture......He was born in the Valley of Kashmir in a family of scholars and mystics and studied all the schools of philosophy and art of his time under the guidance of as many as fifteen (or more) teachers and gurus. In his long life he completed over 35 works, the largest and most famous of which is Tantrāloka, an encyclopedic treatise on all the philosophical and practical aspects of Trika and Kaula (known today as Kashmir Shaivism). ...Tantrāloka is the masterwork of Abhinavagupta, who was in turn the most revered Kashmir Shaivism master. On account of its size and scope it is a veritable encyclopedia of nondual Shaivism, a treasure text containing the synthesis of the 64 monistic āgamas and all the schools of Kashmir Shaivism. The work contains both ritualistic and philosophic aspects, spanning over 37 chapters. Chapter 29 is entirely dedicated to the so-called kula-chakra - a tantric practice which includes ritualized sexual activity. Abhinavagupta also wrote a condensed version of Tantrāloka named Tantrasāra. The whole work has been translated into Italian by Raniero Gnoli."....http://en.wikipedia.org/wiki/Tantraloka

".....the Kalachakra and its related commentaries (sometimes referred to as the Bodhisattvas Corpus) appeared in India in 966 AD ....there is a critique of the Kalachakra by the great Kashmiri Abhinavagupta, who wrote his text Tantraloka before he died in 1025."

"A further interpreter of the tantras, Abhinavagupta, refers to the Ganachakra as the “sacrifice of the wheel” (chakra means ‘wheel’) or as the “highest sacrifice” (Naropa, 1994, p. 46)....http://www.american-buddha.com/kalachak.htm

"...Although the first work, Narma Mala or A Garland of Mirth, takes a narrative form, the other two, Kala Vilasa (A Dalliance with Deceptions) and Deshopadesha (Advice from the Countryside), are more a string of well executed vignettes. The story, at any rate, is of secondary consideration. It is in the details that Kshemendra’s pen cuts most deeply, particularly in his fresh and often shocking similes. The guru whose mouth twitches “like the cunt of an old she-buffalo” is not quickly forgotten, and Mr AND Haksar does justice to the often filthy language of the original..."....http://venetiaansell.wordpress.com/2011/10/18/kshemendra-three-satires-from-ancient-kashmir/

"At times Kshemendra relents and gives us more standard poetic fare but his wit and cynicism are never far from the surface. A beautiful description of Ujjain at dusk mixes the conventional with his own particular style; “the sun…disappeared slowly from the sky like a gambler stripped bare by cheats”. For the most part we are invited to mock as well as condemn the doctor who must kill thousands of patients with experimental concoctions before establishing his reputation, the astrologer who consults “knowledgeable fisherman” about the likelihood of rain and the man about town who gives himself love bites and smears lipstick on his collar before going out. Would that Kshemendra were alive and writing today."....Life and travails of a courtesan by...Harbans Singh.....The Courtesan’s Keeper: A Satire from Ancient Kashmir ... Trans. by A.N.D Haksar.

"How the wealthy trader and his son are divested of their wealth is but a testimonial to the skills acquired by Kankali. However, in the process conditions prevailing in the Valley are vividly and to some, disturbingly depicted. The social milieu is no different from what prevailed during Umrao Jan’s time, with the rich being driven by the single-minded passion of the libertines. Such times bode ill for the existing socio-political order. These are times when the society needs a Moses to come down from Mount Sinai with the Commandments or a Shankracharya to infuse vigor and life to arrest decadence. The Valley had none, with the result that within three centuries it was struck by a gale force that continues to affect the lives of people. Within those momentous centuries, with the arrival of the Tibetan fugitive Rinchan and Sikander Butshikan, the civilisation and culture built by Lalitaditya was consigned, like Ozymandias, to the pages of history. Kshemendra, the author of Samay Mratika, could only warn the society as a satirist can do.....The translator needs a vote of thanks for bringing to the English readers this work which not only is a rich addition to literature but also an important document for sociologists and students of human nature. It has been mentioned that a number of other works of Kshemendra still remain unearthed. One hopes they find the light of the day, for surely they will greatly contribute to the appreciation of that period and enriching the Sanskrit literature.".....http://www.tribuneindia.com/2008/20080629/spectrum/book3.htm

Satires......the first work, Narma Mala or A Garland of Mirth, takes a narrative form, the other two, Kala Vilasa (A Dalliance with Deceptions) and Deshopadesha (Advice from the Countryside), are more a string of well executed vignettes
Kalāvilasā — "A Dalliance with Deceptions"
Samaya Mātrikā — "The Courtesan's Keeper" (Sanskrit)
Narmamālā — "A Garland of Mirth"
Deśopadeśa — "Advice from the Countryside"