Maps of The Shambhala Region 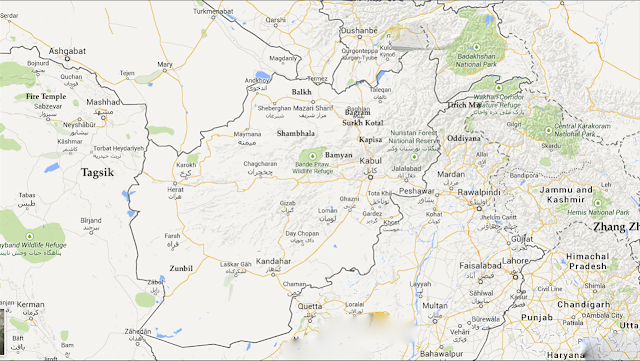 "....he came from the "Kingdom of Shambhala' (approximately, modern Begram, otherwise known as the ancient kingdom of Kapisha, north of Kabul." 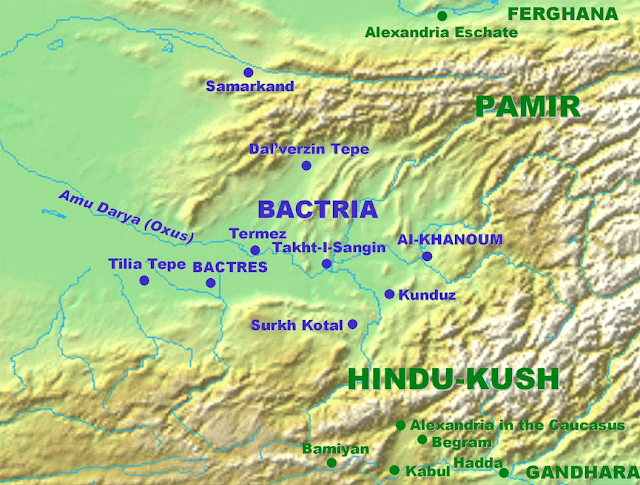 ".....kingdoms of Kapisa (Shambhala) and Uddiyana were also both being hard pressed on their southwesterly flank by the inexorable expansion of the southern Arab Moslems." 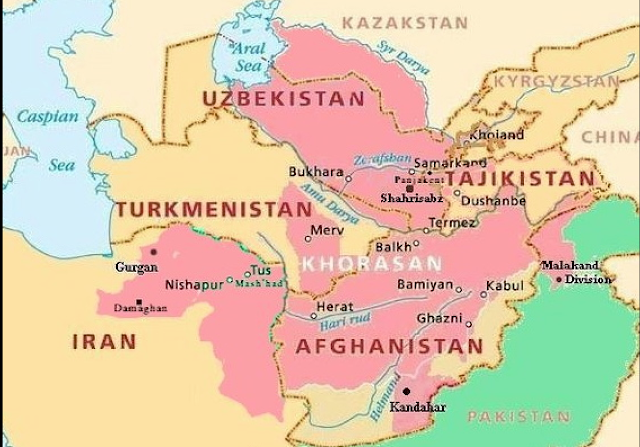 "....The name "Khorasan" is derived from Middle Persian khwar (meaning "sun") and ... hence meaning "land where the sun rises"

The land that became known as Khorasan in geography of Eratosthenes was recognized as Ariana at that time, which made up Greater Iran or the land where Zoroastrianism was the dominant religion. The southeastern region of Ariana fell to the Kushan Empire in the 1st century AD. The Kushan rulers built a capital in modern-day Afghanistan at Bagram and are believed to have built the famous Buddhas of Bamiyan. Numerous Buddhist temples and buried cities have been found in Afghanistan.[12][13] However, the region of Ariana (or Khorasan) remained predominantly Zoroastrian but there were also Manichaeists, sun worshippers, Christians, Pagans, Shamanists, Buddhists, Jews and others. One of the three great fire-temples of the Sassanids "Azar-burzin Mehr" is situated near sabzevar in Iran. The boundary of the region began changing until the Kushans and Sassanids merged to form the Kushano-Sassanian civilization.

Before the region fell to Alexander the Great in 330 BC, it was part of the Achaemenid Empire and prior to that it was occupied by the Medes. Following Alexander's brief occupation, the successor state of the Seleucid Empire controlled the area until 305 BCE when they gave south of the Hindu Kush to the Indian Maurya Empire as part of an alliance treaty….”Alexander took these away from the Aryans and established settlements of his own, but Seleucus Nicator gave them to Sandrocottus (Chandragupta), upon terms of intermarriage and of receiving in exchange 500 elephants.”….—Strabo, 64 BC – 24 AD

During the Sassanid era, Persia was divided into four quarters, Khvarvaran in the west, Bakhtar in the north, Arachosia in the south and Khorasan in the east, next to Sind or Hind. Khorasan in the east saw some conflict with the Hephthalites who became the new rulers in the area but the borders remained stable. Being the eastern parts of the Sassanids and further away from Arabia, Khorasan quarter was conquered after the remaining Persia. The last Sassanid king of Persia, Yazdgerd III, moved the throne to Khorasan following the Arab invasion in the western parts of the empire. After the assassination of the king, Khorasan was conquered by Arab Muslim troops in 647 AD. Like other provinces of Persia it became one of the provinces of Umayyad dynasty.

Surkh Kotal (Persian: سرخ‌کوتل‎), also called Chashma-i Shir or Sar-i Chashma, is an ancient archaeological site located in the southern part of the region of Bactria, about 18 km north of the city of Puli Khumri, the capital of Baghlan Province of Afghanistan.[1] It is the location of monumental constructions made during the rule of the Kushans. Huge temples, statues of Kushan rulers and the Surkh Kotal inscription, which revealed part of the chronology (another fragment of that chronology was found on the Rabatak inscription found nearby) of early Kushan emperors (also called Great Kushans) were all found there…..The site of Surkh Kotal, excavated between 1952 and 1966 by Prof. Schlumberger of the Délégation Archéologique Française en Afghanistan, is the main site excavated of the Kushan Empire. Some of the site's sculptures were transferred to the National Museum of Afghanistan (also known as the 'Kabul Museum'), the rest of the site was completely looted during the Afghan Civil War. The most famous artifacts of this site are the Surkh Kotal inscriptions, the statue of King Kanishka and the fire altar. The statue of the king was destroyed during the Taliban wave of iconoclasm in February–March 2001, but has been restored by French conservationists. The three artifacts are currently on display in the Afghan National Museum.

"Vasubandhu was trained in the orthodox Sarvastivada Order of Buddhism, which had its seat at Kausambhi (near modern Allahabad, in the centre of India) during the 2nd, 3rd and 4th centuries AD. He was introduced to an early version of Yogacara theory by his elder brother Asanga, who in turn had been the disciple of a sage named Maitreyanatha. Next to nothing about the latter is known, other than that legend reports he came from the "Kingdom of Shambhala' (approximately, modern Begram, otherwise known as the ancient kingdom of Kapisha, north of Kabul) located in the Afghanistan region, north-west of Peshawar....Bagram (بگرام Bagrám), founded as Alexandria on the Caucasus and known in medieval times as Kapisa, is a small town and seat in Bagram District in Parwan Province of Afghanistan, about 60 kilometers north of the capital Kabul.."....http://www.dharmafellowship.org/library/essays/yogacara-part1.htm

"......the era during which we must suppose these events to have occurred was in fact one of great social upheaval and turmoil. In 690 A.D. the lady Wu Chao had managed to usurp the throne of China and have herself made Emperor (Huang-ti), after having been proclaimed, by an ambitious court monk, as an Incarnation of the future Buddha Maitreya. By 669 the Western Turks were undergoing considerable political turmoil and Tri Du-srong, the emperor of Tibet, was actively extending his power in Central Asia by means of continuous bloody warfare and pillage. The neighboring Turkish Shahi kingdoms of Kapisa (Shambhala) and Uddiyana were also both being hard pressed on their southwesterly flank by the inexorable expansion of the southern Arab Moslems......Ramashankar Tripathi tells us that although "hardly anything is known of the Turki Shahis" during this era, nevertheless it is certain they were carrying on "intermittent wars with the Arab invaders from the seventh to the middle of the ninth century A.D."......http://www.ogyenling.org/Home.aspx