"According to the 'Bro tradition, the Kalachakra was brought to India during the reign of Kalki Shripala. He taught to Kalachakrapada (who had been born in North Bengal). …The Kalachakra system first appeared in India at the beginning of the 11th century (1012 AD).”

“I believe the earliest stratum of the Indian Kalacakra literature, including the texts studied here, is the product of a small group of vajracaryas who flourished in northeastern India during the early decades of the 11th century CE. Members of the original Kalacakra cult included Atisa's guru Pindo - a brahman Buddhist monk from Indonesia and Naro (Naropada) - the famous vajracarya of Nalanda”….JOHN NEWMAN….Islam in the Kalacakra Tantra

“The Sri Kalacakra, Vimalaprabha, Tantrahrdaya, Svadarianamatod- deia, and Paramdrthasevd all can be dated with a remarkable degree of precision: all are quoted by name in the Paramdrthasamgraha-nama- 18 SekoddeSatTka composed by Naro, who probably died ca. 1040 CE.”…JOHN NEWMAN Islam in the Kalacakra Tantra 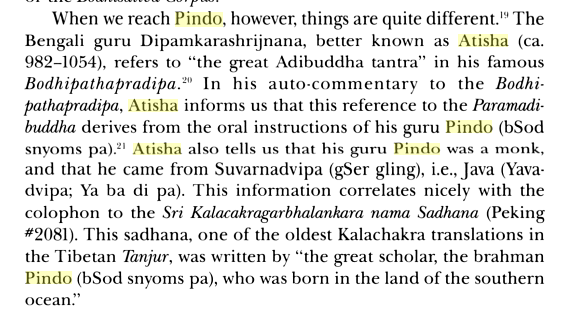 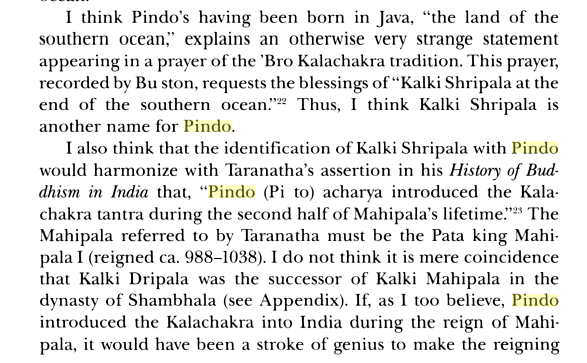 “Atiśa Dīpaṃkara Śrījñāna (Bengali: অতীশ দীপঙ্কর শ্রীজ্ঞান Ôtish Dipôngkor Srigên, Sanskrit: अतिश दिपङ्क्र स्रिज्ञान[… Chinese: 燃燈吉祥智; pinyin: Rándēng Jíxiángzhì) (980–1054 CE) was a Buddhist teacher from the Pala Empire in Bengal. He was one of the major figures in the spread of 11th-century Mahayana Buddhism in Asia and inspired Buddhist thought from Tibet to Sumatra. Revered as one of the great figures of classical Buddhism, Atisa was a key figure in the establishment of the Sarma schools of Tibetan Buddhism……According to Tibetan sources, Atiśa was ordained into the Mahasamghika lineage at the age of twenty-eight by the Abbot Śīlarakṣita and studied almost all Buddhist and non-Buddhist schools of his time, including teachings from Vishnu, Shiva, Tantric Hinduism and other beliefs. He also studied the sixty-four kinds of art, the art of music and the art of logic and accomplished these studies until the age of twenty-two. Among the many Buddhist lineages he studied, practiced and transmitted the three main lineages were the Lineage of the Profound Action transmitted by Maitreya/Asaṅga, Vasubandhu, the Lineage of Profound View transmitted by Manjushri/Nagarjuna, Chandrakirti, and the Lineage of Profound Experience transmitted by Vajradhara/Tilopa, Naropa. It is said that Atiśa had more than 150 teachers, but one prominent teacher above all else was Dharmakīrti from Sumatra, Indonesia.”

“Vajrayana Buddhism, also known as Tantric Buddhism, found its way to the Indonesian islands of Java and Sumatra before 700 C.E., which predates the 8th Century first wave of the 'Ancient Translation School' (Tibetan: Nyingmapa) in Greater Tibet and the Himalayan region. This particular Tantric and Vajrayana lineage in Indonesia is specifically referred to as Mantranaya. Mantranaya is historically designated and evident in the oldest extant Old Javanese esoteric Buddhist literature. ….The Buddhist empire of Srivijaya in Palembang, Sumatra was for more than 600 years, the centre of Vajrayana learning in the Far East…… Yi Jing (635-713) praised the high level of Buddhist scholarship in Srivijaya and advised Chinese monks to study there prior to making the journey to the great institution of learning, Nalanda Vihara, India….The oldest extant esoteric Buddhist Mantranaya (largely a synonym of Mantrayana, Vajrayana and Buddhist Tantra) literature in Old Javanese, a language significantly influenced by Sanskrit, is enshrined in the Sang Kyang Kamahayanan Mantranaya.”

“Palembang is one of the oldest cities in Indonesia, and has a history of being the capital city of the Kingdom of Srivijaya, a powerful Malay kingdom, which influenced much of Southeast Asia. The earliest evidence of its existence dates from the 7th century; a Chinese monk, Yijing, wrote that he visited Srivijaya in the year 671 for 6 months. The first inscription in which the name Srivijaya appears also dates from the 7th century, namely the Kedukan Bukit Inscription around Palembang in Sumatra, dated 683.” 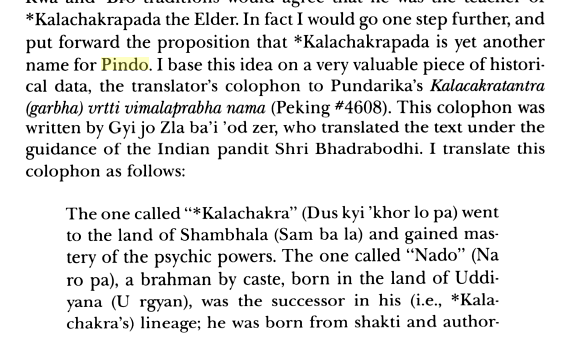 “The Pāla Empire (Bengali: পাল সাম্রাজ্য Pal Samrajyô) was an Indian imperial power, during the Classical period of India, that existed from 750–1174 CE. According to Abu'l-Fazl ibn Mubarak (in Ain-i-Akbari), the Palas were Kayasthas. It was ruled by a Buddhist and Hindu dynasty from Bengal in the eastern region of the Indian subcontinent, all the rulers bearing names ending with the suffix Pala (Modern Bengali: পাল pāl), which means protector. The Palas were often described by opponents as the Lords of Gauda. The Palas were followers of the Mahayana and Tantric schools of Buddhism. Gopala was the first ruler from the dynasty. He came to power in 750 in Gaur after being elected by the various regional chieftains. He reigned from 750–770 and consolidated his position by extending his control over all of Bengal. The dynasty lasted for four centuries (750–1120 CE) and ushered in a period of stability and prosperity in Bengal. They created many temples and works of art as well as supported the Universities of Nalanda and Vikramashila. Somapura Mahavihara built by Dharmapala is the greatest Buddhist Vihara in the Indian Subcontinent.” 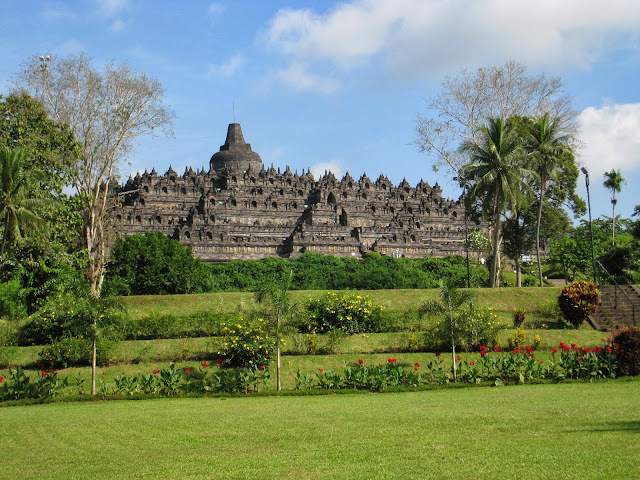 "Borobudur, or Barabudur, is a 9th-century Mahayana Buddhist Temple in Magelang, Central Java, Indonesia. The monument consists of six square platforms topped by three circular platforms and is decorated with 2,672 relief panels and 504 Buddha statues. A main dome, located at the center of the top platform, is surrounded by 72 Buddha statues seated inside a perforated stupa. It is the world’s largest Buddhist temple, as well as one of the greatest Buddhist monuments in the world.....Built in the 9th century during the reign of the Sailendra Dynasty, the temple was designed in Javanese Buddhist architecture, which blends the Indonesian indigenous cult of ancestor worship and the Buddhist concept of attaining Nirvana.....Evidence suggests Borobudur was constructed in the 9th century and abandoned following the 14th-century decline of Hindu kingdoms in Java and the Javanese conversion to Islam."

“The most recent 25 of the 32 Kings of Shambhala are known as Kalki kings (Tib. Rigden, wylie: rigs ldan). Kalki means "Holder of the Castes." The Kalki King is said to reside on a "lion throne" in Kalapa, the capital city of the Kingdom. They are holders of the Kalachakra (Wheel of Time) teachings of Buddha Shakyamuni, passed down from the original seven Dharmarajas of Shambhala….” Chattopadhyaya, Alaka, Atīśa, and Chimpa. Atīśa and Tibet; Life and Works of Dīpaṃkara Śrījñāna in Relation to the History and Religion of Tibet, [Calcutta]: distributors: Indian Studies: Past & Present, 1967.