The Shift from Aniconic to Anthropomorphic Buddha in Greco-Buddhist Iconography…. 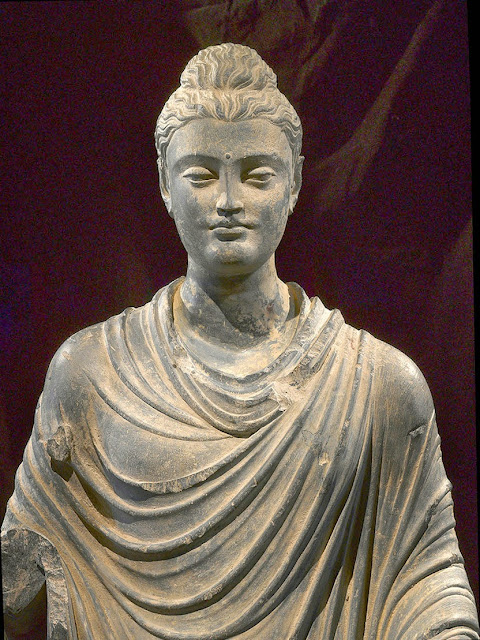 "One of the distinguishing features of the Gandharan school of art that emerged in north-west India is that it has been clearly influenced by the naturalism of the Classical Greek style. Thus, while these images still convey the inner peace that results from putting the Buddha's doctrine into practice, they also give us an impression of people who walked and talked, etc. and slept much as we do. I feel this is very important. These figures are inspiring because they do not only depict the goal, but also the sense that people like us can achieve it if we try" (His Holiness The 14th Dalai Lama… foreword to "Echoes of Alexander the Great", 2000.) 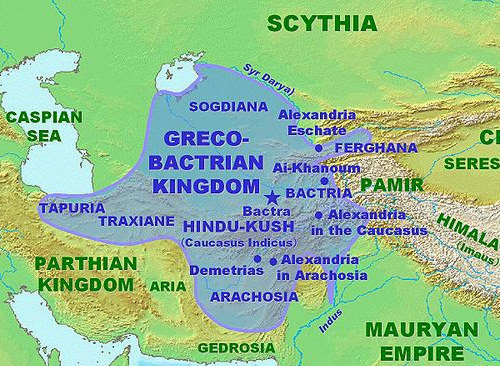 “The origins of Greco-Buddhist art are to be found in the Hellenistic Greco-Bactrian kingdom (250 BC- 130 BC), located in today’s Afghanistan,….The Greco-Bactrian Kingdom was — along with the Indo-Greek Kingdom — the easternmost part of the Hellenistic world, covering Bactria and Sogdiana in Central Asia from 250 to 125 BC. The expansion of the Greco-Bactrians into northern India from 180 BC established the Indo-Greek Kingdom, which was to last until around AD 10.” 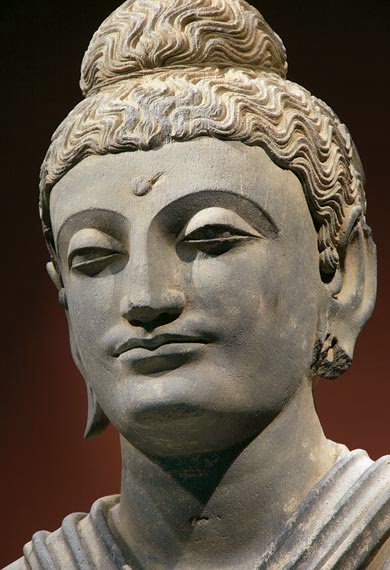 “It was not until the Greek presence in South Asia after the conquests of Alexander the Great in 326 BC that the anthropomorphic representation of Buddha emerged (Krishan 29).After Alexander the Great had conquered Northern India, the Gandhara region became a melting pot for both Greek and Buddhist traditions…… The artists in the Gandhara region fused Greek realism which had Hellenistic origins with the more naturalistic inspired Indian mysticism. In essence, the art created in the Gandhara region during the Hellenistic period derived its content from Indian mysticism while the form was that of Greek realism. This true hybrid art form was the product of almost two centuries of interactions between Indo-Greek culture…….These diverse cultural interactions owe much of their credit to the Silk Road transmission of culture…..http://www.academia.edu/1977694/The_Shift_from_Aniconic_to_Anthropomorphic_Buddha_in_Greco-Buddhist_Iconography_How_Anthropomorphism_Advanced_Buddhism

“Gandhara is the name of an ancient kingdom (Mahajanapada), located in parts of modern-day northern Pakistan and eastern Afghanistan. The Kingdom of Gandhara lasted from the early first millennium BC to the eleventh century AD…..Gandhāran style flourished and achieved its peak during the Kushan period, from the first to the fifth century. It declined and suffered destruction after the invasion of the White Huns in the fifth century……Gandhāra is noted for the distinctive Gandhāra style of Buddhist art, which developed out of a merger of Greek, Syrian, Persian, and Indian artistic influence. The conquests of Alexander the Great in 332 BC lead to the development of Greco-Buddhist art…..Gandharan Buddhist sculpture displays Greek artistic influence, and it has been suggested that the concept of the "man-god" was essentially inspired by Greek mythological culture. It contributed to depicting wavy hair, drapery covering both shoulders, shoes, and sandals…..In Gandharan art, the Buddha is often shown under the protection of the Greek god Herakles, standing with his club resting over his arm…..Stucco as well as stone was widely used by sculptors in Gandhara for the decoration of monastic and cult buildings. Stucco provided the artist with a medium of great plasticity, enabling a high degree of expressiveness to be given to the sculpture.”…..https://www.boundless.com/art-history/art-of-south-and-southeast-asia-before-1200/kushan-and-later-andhra-periods/gandhara-style/ 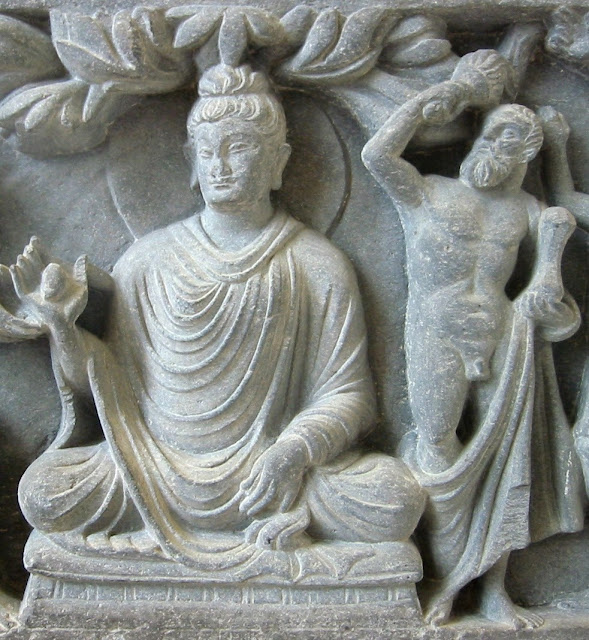 Kushans….”It was only after Greek rule in the Gandhara region had been superseded by the Kushans that artistic representations of Buddha emerged. Centuries of syncretism between the Indo-Greeks had created an artistic culture that contained elements of Greek realism and Indian mysticism. The Kushans readily assimilated to Greek ideals by adopting the symbol of Nike who represents the goddess of victory (Foltz 45). These iconographic portrayals of pride in geographical dominance were imprinted upon the coins during the Kushan dynasty which lasted from 30-375 CE (Krishan 34).” 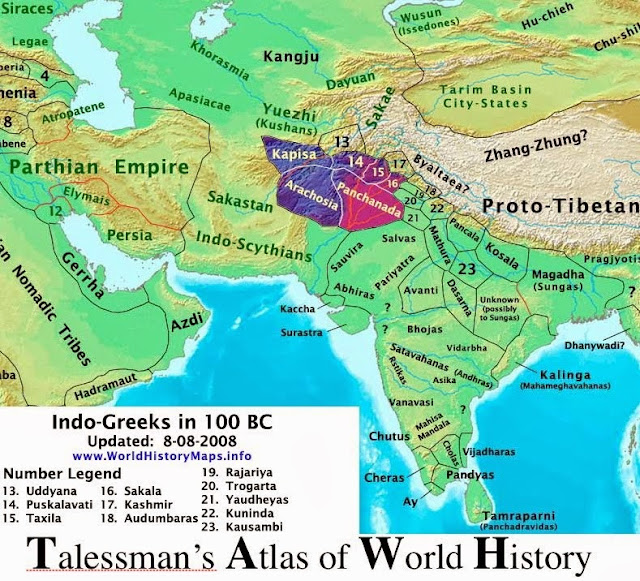 “……some of the reasons regarding the aniconic portrayal of the Buddha in early Buddhist practice. Vedism by its very nature was aniconic because it considered the highest gods as ultimately transcendent and formless (Krishan 9). Therefore artistic portrayals of the highest deities were not forbidden by doctrine, rather they were contradictory to the message they set out to portray. The concept of being a formless, impersonal and unseen force of nature meant that the highest deities defied representation. One could liken this to a metaphor of the wind. Although wind exerts effects on objects, it cannot be perceived as a concrete object in and of itself. The Hindu conceptualization of the “Ultimate Being” is portrayed exactly in this way…….However, it was not until the Kushan period (1st to 2nd AD) that this Ultimate Being was anthropomorphically portrayed as Brahma, Vishnu and Siva (Pratapaditya 27). Each of these deities can be multiply realized into many forms called avatars. Avatars are descendents of the formless and intangible Ultimate Being who join the physical realm through instantiating themselves into one of the various forms depending on the intent of their purposes….When Buddhism was in its infancy, those who were faithful to the growing tradition were careful to act within to the Vedic tradition to avoid any normative displacement (Krishan 51)…..”….The Shift from Aniconic to Anthropomorphic Buddha in Greco-Buddhist Iconography: How Anthropomorphism Advanced Buddhism….David C. Puzak….York University

“…Achaemenian period. Soon after his conquest of Lydia and the Ionian cities in 547 B.C.E., Cyrus the Great decided to have their artists and artisans work at Pasargadae, his capital. These were soon joined by Mesopotamians, Phoenicians, and later by Egyptians, destined to carry out the imperial program as an image of the king’s power over a diversified and peaceful empire. To all the known monuments of Pasargadae, Ionian artisans contributed the techniques of stonework…”…..http://www.iranicaonline.org/articles/greece-vii

“ …..the Heart Sutra, says: "There is no form, nor feeling, nor perception, nor impulse, nor consciousness, no eye, or ear, or nose, or tongue, or body, or mind, no form, nor sound, nor smell, nor taste, or touchable, nor object of mind...". It is worth noting that there are Greek texts that speak in a very similar voice, for example the following (probably Pyrrhonist) statement which is quoted by a commentator on Plato's Theatetus: "No form, no words, no object of taste, or smell, or touch, no other object of perception, has any distinctive character”….The Shape of Ancient Thought. Comparative studies in Greek and Indian Philosophies by Thomas McEvilley (Allworth Press and the School of Visual Arts, 2002)

“Aniconism in Buddhism….Wikipedia……Since the beginning of the serious study of the history of Buddhist art in the 1890s, the earliest phase, lasting until the 1st century CE, has been described as aniconic; the Buddha was only represented through symbols such as an empty throne, Bodhi tree, a riderless horse (at Sanchi), Buddha's footprints, and the dharma wheel.This reluctance towards anthropomorphic representations of the Buddha, and the sophisticated development of aniconic symbols to avoid it (even in narrative scenes where other human figures would appear), seem to be connected to one of the Buddha's sayings, reported in the Digha Nikaya, that discouraged representations of himself after the extinction of his body…..Although there is still some debate, the first anthropomorphic representations of the Buddha himself are often considered a result of the Greco-Buddhist interaction, in particular in Gandhara, a theory first fully expounded by Alfred A. Foucher, but criticised from the start by Ananda Coomaraswamy.” 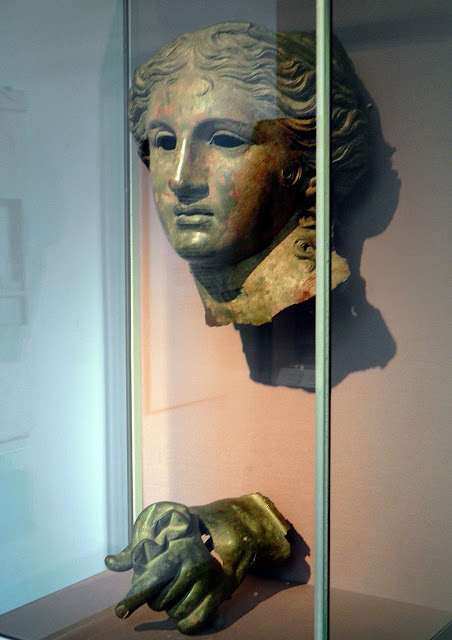 Head from a bronze cult statue of Anahita, a local goddess shown here in the guise of Aphrodite, 200-100 BC.... British Museum, London.