“Cintāmaṇi (Sanskrit; Devanagari: चिन्तामणि) also spelled as Chintamani (or the Chintamani Stone) is a wish-fulfilling jewel within both Hindu and Buddhist traditions, equivalent to the philosopher's stone (Paras Pathar) in Western alchemy….. 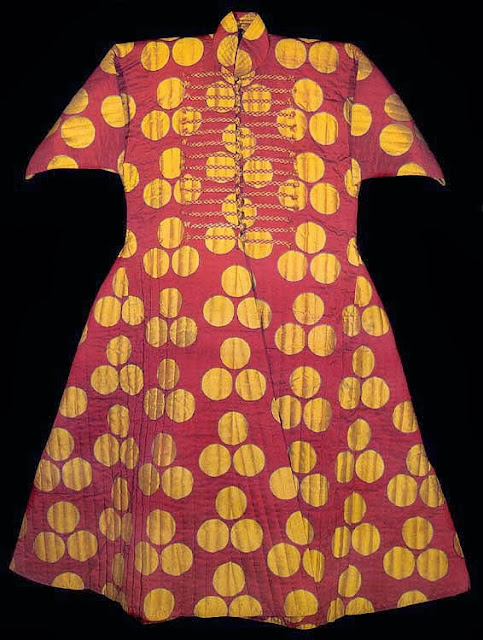 “Çintamani is an Ottoman decorative motif that appears in textiles and tiles. It can be composed of a group of three circles arranged in a triangle. Or it can be a pair of wavy lines……Scholars debate the source and meaning of the pattern. Some point to Central Asian Buddhism, since, in Tibetan Buddhism, cintamani (a Sanskrit word) is the wish-fulfilling jewel, held by Avalokiteshvara, a Bodhisattva or representations of Buddha, and the circular motif could be that glowing pearl. The wavy lines that can be cloulds or waves borrowed from Chinese and Tibetan art. Others think that these patterns were originally used in Central and Eastern Asia as animal patterns, wavy tiger stripes and circular leopard spots…..http://home.earthlink.net/~al-tabbakhah/cintamani.html

“The Gankyil (Standard Tibetan: དགའ་འཁྱིལ་) is a symbol and ritual tool in Tibetan Buddhism, Bön, Himalayan Shamanism, Korean Buddhism, and Japanese Buddhism. In Bön and Nyingma Dzogchen lineages, the Gankyil is the principal symbol and teaching tool: it is symbolic of primordial energy and represents the central unity and indivisibility of all the teaching, philosophical and doctrinal triune of Dzogchen (and quadrune of the greater Buddhadharma such as the Four Noble Truths and the 'Four Joys' of the Bonpo). It is an attribute of the Snow Lion.”

“A triskelion or triskele (which invariably has rotational symmetry) is a motif consisting of three interlocked spirals, or three bent human legs. Both words are from Greek "τρισκέλιον" (triskelion) or "τρισκελής" (triskeles), "three-legged", from prefix "τρι-" (tri-), "three times" + "σκέλος" (skelos), "leg". Although it appears in many places and periods, it is especially characteristic of the Celtic art of the La Tène culture of the European Iron Age…..

“The Gankyil, or ‘Wheel of Joy’, can clearly be seen to reflect the inseparability and interdependence of all the groups of three in the Dzogchen teaching, but perhaps most particularly it shows the inseparability of the Base, the Path, and the Fruit. And since Dzogchen, the Great Perfection, is essentially the self-perfected indivisibility of the primordial state, it naturally requires a non-dual symbol to represent it”…..Norbu, Chögyal Namkhai Rinpoche (Edited by John Shane) (1988). The Crystal and the Way of Light.. Routledge & Kegan Paul.

According to Déchen & Ngak’chang:…..The structure of Dzogchen teachings is always in groups of three – such as base, path and fruit – but although they are divided in this way their indivisibility is emphasised by symbols such as the mélong (me long) and of the ga’kyil (dGa’ dKyil). —Déchen & Ngak’chang, Dzogchen transmission of the non-dual state…. 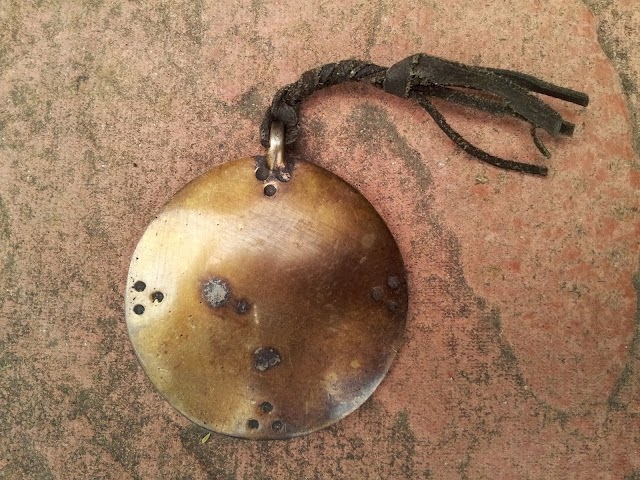 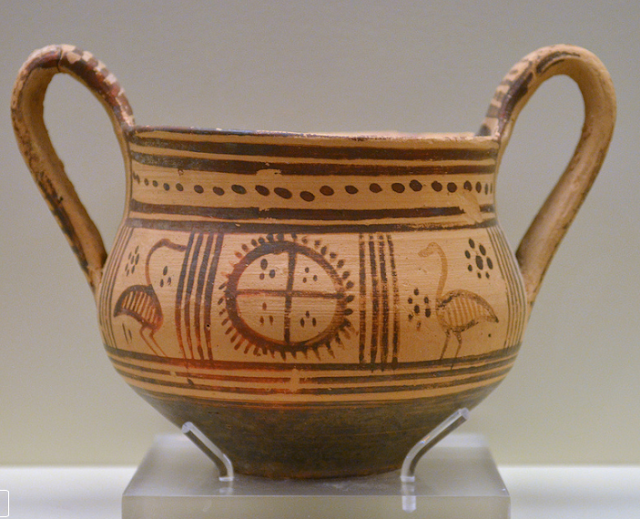 Late Geometric kantharos from Marathon……Kantharos with decoration of wheel and water birds in panels with dot-rosettes.
From the Geometric necropoleis of Marathon……Archaeological Museum of Marathon, Attica, Greece.

“Gankyil དགའ་འཁྱིལ (Wylie: dga'_'khyil), (equivalent Sanskrit: ananda-chakra), pronounced "ganshey" or "ganshee", is formed from the words dga' ("joy, elation, rapture, bliss, ecstasy, beauty, total happiness" i.e. the opposite of dukkha) and 'khyil ("swirling; circle, ring, bracelet, coil,mandala, a place where water flows"). Thus, it may be rendered into English as "bliss-whirling" or "wheel of joy”…..http://rywiki.tsadra.org/index.php/dga'_'khyil 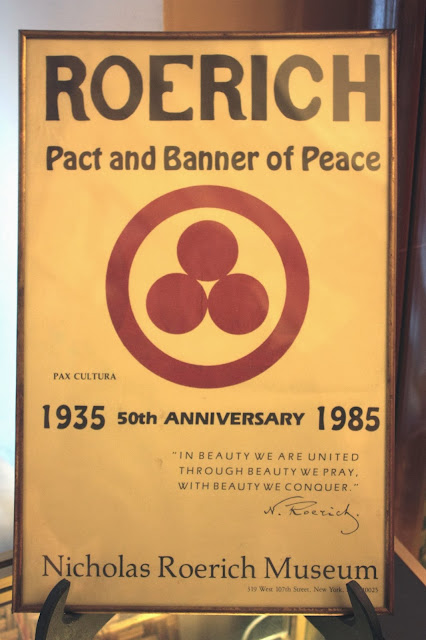 “Roerich’s Pact also Pax Cultura ("Cultural Peace" or "Peace through Culture") is the motto of the cultural artifact protection movement founded by Nicholas Roerich, and is symbolized by a maroon on white emblem consisting of three solid circles in a surrounding circle….According to the Roerich Museum, "The Banner of Peace symbol has ancient origins. Perhaps its earliest known example appears on Stone Age amulets: three dots, without the enclosing circle. Roerich came across numerous later examples in various parts of the world, and knew that it represented a deep and sophisticated understanding of the triune nature of existence. …..In 1929 Roerich in collaboration with Paris University professor George Chklaver prepared a draft of an international treaty dedicated to protection of cultural values. The scheme was to be a cultural analog to the Red Cross for medical neutrality…committees supporting the Pact were established in many countries. The draft pact was approved by Committee for Museum affairs at League of Nations and also by the Committee of the Pan-American Union. Ultimately, the Pact was signed by 21 states in the Americas and was ratified by ten of them.”….http://www.roerich.org/roerich-biography.php?mid=pact 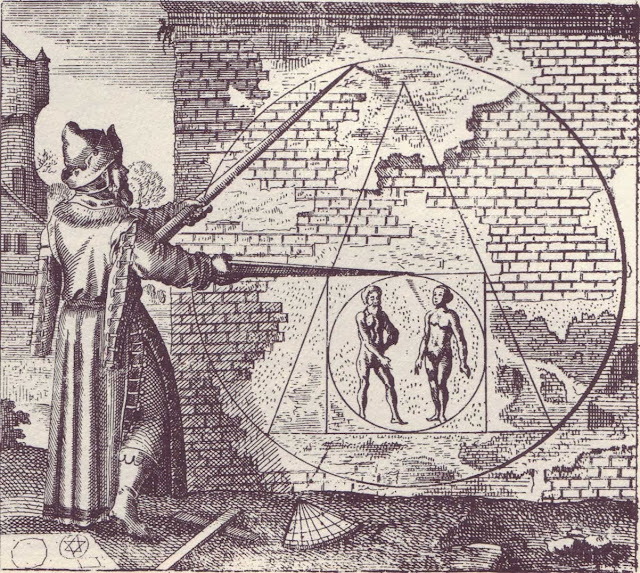 “…The word swastika came from the Sanskrit word svastika, meaning any lucky or auspicious object, and in particular a mark made on persons and things to denote auspiciousness, or any piece of luck or well-being. It is composed of su- meaning "good, well" and asti "to be". Suasti thus means "well-being." The suffix -ka, meaning "soul", suastika might thus be translated literally as "that which is associated with well-being," corresponding to "lucky charm" or "thing that is auspicious." The Sanskrit term has been in use in English since 1871, replacing gammadion (from Greek γαμμάδιον). Alternative historical English spellings of the Sanskrit phonological words with different meanings to include suastika, swastica, and svastica. The word does not occur in Vedic Sanskrit. As noted by Monier-Williams in his Sanskrit-English dictionary, according to Alexander Cunningham, its shape represents a monogram formed by interlacing of the letters of the auspicious words su-astí (svasti) written in Ashokan characters. Other names for the shape are:
crooked cross, hook cross or angled cross (Hebrew: צלב קרס, German: Hakenkreuz).
cross cramponned, cramponnée, or cramponny, in heraldry, as each arm resembles a Crampon or angle-iron (German: Winkelmaßkreuz).
fylfot, chiefly in heraldry and architecture. The term was coined in the 19th century based on a misunderstanding of a Renaissance manuscript.
gammadion, tetragammadion (Greek: τετραγαμμάδιον), or cross gammadion (Latin: crux gammata; French: croix gammée), as each arm resembles the Greek letter Γ (gamma).
tetraskelion (Greek: τετρασκέλιον), literally meaning "four legged", especially when composed of four conjoined legs (compare triskelion (Greek: τρισκέλιον)).
The Tibetan swastika (࿖) is known as g.yung drung 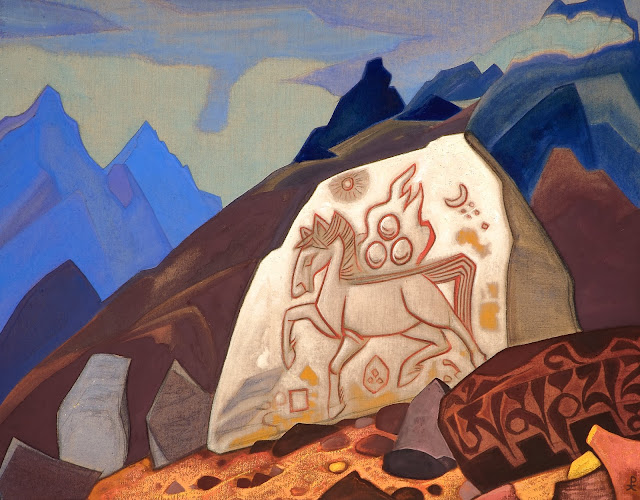