“Shenlha Okar is depicted with a white body "like the essence of crystal," … The Bon Religion of Tibet: The Iconography of a Living Tradition by Per Kvaerne. Shambhala Publications, 2001. ISBN 1-57062-186-1 pg. 26) 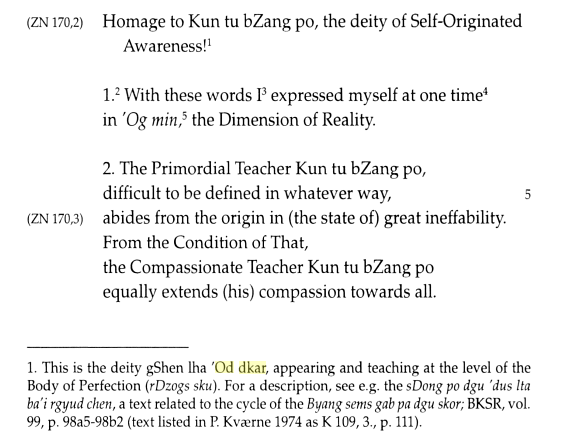 “Mithra, also spelled Mithras, (Sanskrit Mitra), in ancient Indo-Iranian mythology, the god of light, whose cult spread from India in the east to as far west as Spain… As god of light, Mithra was associated with the Greek sun god, Helios, and the Roman Sol Invictus. He is often paired with Anahita, goddess of the fertilizing waters…..While Mithra is not the divinity of the Sun in Zoroastrian scripture (or in Indian scripture either), this being the role of Hvare.khshaeta (literally "radiant Sun", whence also Middle Persian Khorshed for the Sun), in Zoroastrian/Iranian tradition, Mithra became the divinity of the Sun. How, when or why this occurred is uncertain, but it is commonly attributed to a conflation with the Babylonian Shamash, who – in addition to being a Sun god – was a judicial figure like Mithra. In the Hellenistic era (i.e., in Seleucid and Parthian times), Mithra also seems to have been conflated with Apollo, who – like Mithra – was an all-seeing divinity of the truth…..Mithraic Iconography and Ideology, Volume 11…..Leroy A. Campbell…..E. J. Brill, 1969 - Mithraism - 446 pages

gShen-lha od-dkar…..”In Tibetan Bon-religion, the god of the 'white light' who forms with the goddess Yum-chen-mo the primeval pair of gods. All the other gods are their descendants. In Lamaism he is the god of wisdom…..http://www.pantheon.org/articles/s/shen-lha_od-dkar.html

“In later Tibetan traditions, Oḍḍiyāna is either conflated or identified with Shambhala,

"Some scholars assert that Olmo is quite an ordinary place like other valleys and that the name Olmo Lung-ring simply means "the long valley of Olmo". Furthermore, the sacred mountain of Yungdrung Gutseg in the center of Olmo Lung-ring is called a crystal monolith because it is a quite ordinary mountain surmounted by a glacier." 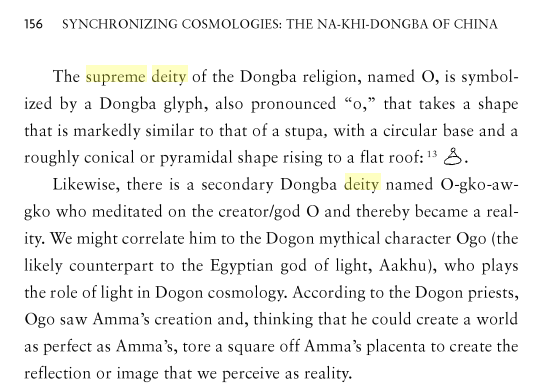 "The supreme deity of the Dongba religion (South China Bonpo) is named 'O'….symbolized by a Dongba glyph, also pronounced "o" that takes a shape that is markedly similar to that of a stupa, with a circular base and a roughly conical or pyramidal shape rising to a flat roof"…The Cosmological Origins of Myth and Symbol: From the Dogon and Ancient Egypt to India, Tibet, and China (Google eBook)…..Inner Traditions / Bear & Co, Sep 24, 2010 - Body, Mind & Spirit - 208 pages

Ösel …..(tib. hod-gsal; 'od gsal), “the Yoga of the Clear Light (often translated as 'Radiant Light' (Sanskrit: prabhasvara), referring to the 'intrinsic purity' (Tibetan: ka-dag) of the substratum of the 'mindstream' (Tibetan: sems-rgyud) is a sadhana found in Vajrayana and Bön centered on the state of luminous clarity. Many versions, derivatives and accretions of the sadhana are extant. Ösel is generally included amongst the Six Yogas of Naropa and its sister tradition the Six Yogas of Niguma. Ösel is also an experience of 'rigpa' the 'reflexive apperception' (Sanskrit: Svasaṃvedana, Wylie: rang rig pa) of the mindstream."......https://en.wikipedia.org/wiki/Ösel_(yoga)

'od lnga……”The Five Pure Lights (Tibetan: 'od lnga) is an essential teaching in the Dzogchen tradition of Bön and Tibetan Buddhism. For the deluded, matter seems to appear. This is due to non-recognition of the five lights. Matter includes the mahābhūta or classical elements, namely: space, air, water, fire, earth. Knowledge (rigpa) is the absence of delusion regarding the display of the five lights. This level of realization is called rainbow body….In the Bonpo Dzochen tradition, the Five Pure Lights are discussed in the Zhang Zhung Nyan Gyud and within this auspice two texts in particular go into detail on them as The Six Lamps (Tibetan: སྒྲོན་མ་དྲུག་, Wylie: sgron ma drug) and The Mirror of the Luminous Mind (Tibetan: འོད་གསལ་སེམས་ཀྱི་མེ་ལོང་, Wylie: 'od gsal sems kyi me long).

“Om (written universally as ॐ; in Devanagari as ओं oṃ [õː], औं auṃ [ə̃ũ], or ओ३म् om [õːm]) is a mantra and mystical Sanskrit sound of Hindu origin (geographically India), sacred and important in various Dharmic religions such as Hinduism, Buddhism, Sanatana Dharma and Jainism. The syllable is also referred to as omkara (ओंकार oṃkāra) or aumkara (औंकार auṃkāra), literally "om syllable", and in Sanskrit it is sometimes referred to as praṇava, literally "that which is sounded out loudly".

“The Egyptian word for light is aakhu, a word whose pronunciation corresponds with the Dogon word Ogo, the name of an allegorical character from Dogon mythology who symbolizes light..”….The Key to Advanced Science in the Ancient Egyptian Hieroglyphs

“Utu (Akkadian rendition of Sumerian UD 𒌓 "Sun", Assyro-Babylonian Shamash "Sun") is the Sun god in Sumerian mythology,….Epic of Gilgamesh. In the myth, Gilgamesh seeks to establish his name with the assistance of Utu, because of his connection with the cedar mountain. Gilgamesh and his father, Lugalbanda were kings of the first dynasty of Uruk, a lineage that Jeffrey H. Tigay suggested could be traced back to Utu himself. He further suggested that Lugalbanda's association with the sun-god in the Old Babylonian version of the epic strengthened "the impression that at one point in the history of the tradition the sun-god was also invoked as an ancestor”…… Marduk is spelled AMAR.UTU in Sumerian, literally, "the calf of Utu" or "the young bull of the Sun".

“Noor is the Light of God in Sufism. The word itself means light in Arabic, Persian and Urdu…..Surat Al-Nur (Arabic: سورة النور‎) (The Light) is the 24th sura of the Qur'an with 64 ayat….

The Philosophical View of the Great Perfection in the Tibetan Bon Religion…..By Donatella Rossi