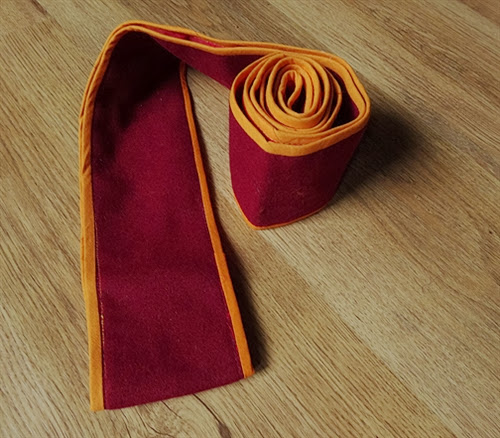 “The meditation belt is called a gom-tag, and the stick is called a gom-ten (support) or gom-shing (stick). There are gom-tags of at least four different lengths and also different kinds of gom-ten. These are used in various combinations to facilitate a series of highly specific meditation postures which co-ordinate body posture with the functioning of the rTsa-rLung system (spatial nerves and spatial winds)'….......From a teaching on the Longchen Nyingtik Guru Yoga, given by Kyabje Dilgo Khyentse Rinpoche in Dordogne, France in August 1984, at the request of Sogyal Rinpoche and the Rigpa Sangha 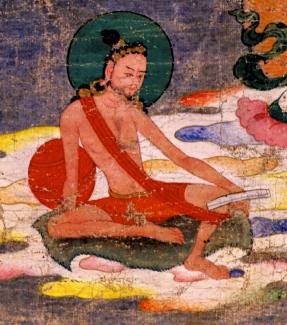 “Vairochana accepted Yudra Nyingpo as a disciple. Yudra Nyingpo was eventually responsible for helping Vimalamitra to translate the later texts of sem-dé into Tibetan, whilst also working towards helping his teacher return to Tibet from exile. At this time Vairochana gave Pag Mipham Gönpo oral instruction on the Dzogchen long-dé series. Pag Mipham Gönpo (the Invincible Geriatric) was a physically frail man of eighty-five when he started to practise, so the meditation belt and a stick which were part of the transmission proved very useful. A lot of people imagine that Vairochana gave him the meditation belt and a stick to prop up his chin and hold him in position because of his age, but this is not accurate. The belt and stick are an essential aspect of long-dé practice, and are used by practitioners of all ages.”….......From a teaching on the Longchen Nyingtik Guru Yoga, given by Kyabje Dilgo Khyentse Rinpoche in Dordogne, France in August 1984, at the request of Sogyal Rinpoche and the Rigpa Sangha 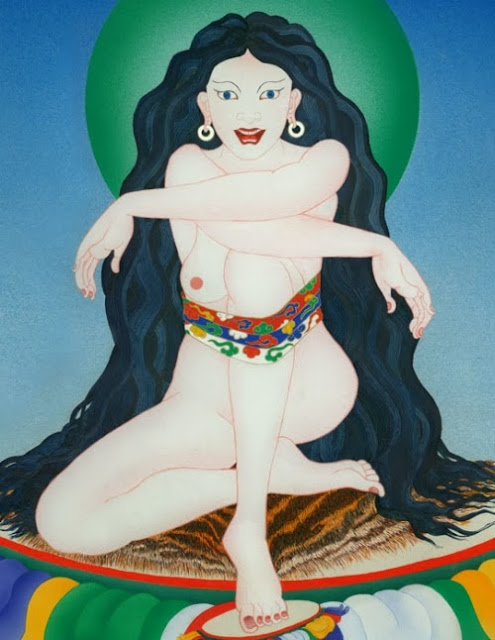 “A-yé Khandro is shown in the posture of one of a number of Dzogchen long-dé practices. These postures are strikingly different from normal postures for meditation such as lotus posture. The purpose of the posture is to influence the rTsa rLung. Many of the postures employ belts and support sticks (gom shing – ‘shing’ can be translated as tree, branch, crutch, or stick), Here a gomtag (meditation strap) is being used. The red, white and blue of the gomtag reflect the symbolic colours of the solar, lunar and central channels.”…http://www.aroencyclopaedia.org/shared/text/a/ayk_th_01_05_posture_eng.php 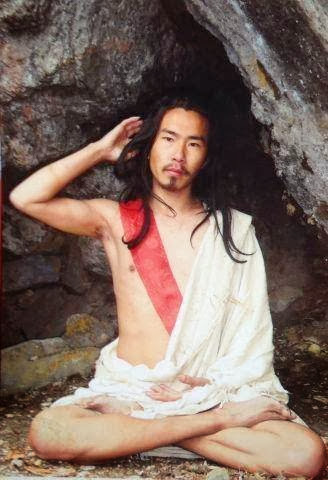 “A young repa (ras pa) or yogic practitioner associated with the Drikung Kagyud order just wearing a white undied cotten cloth. His name is Thinle Dorje and spent 3 years in strict solitary retreat at Lapchi, Southern Tibet. He is in the pose of Milarepa with the right hand near the ear, i.e. pressing a subtle energy point at the side of the neck. Besides the cotton cloth he wears a red meditation belt or gomthag.” 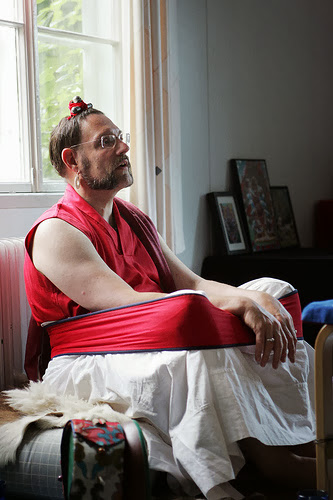 “Ralzhig Pema Legden is wearing a meditation-strap (gom-tag). This is one of a set of practice supports that properly belong to Dzogchen rLong-de, where they are used in relation to pressure-points so as to give rise to subtle psycho-physical experience. However, the gom-tag also has its benefits in Sem-dé as soon as one graduates to practising with the eyes open. Inside the strap the back is relaxed, naturally straight, and inclined, so that the gaze is slightly elevated….Ralzhig Pema Legden says: ‘In a pocket of my gom-tag I keep a nine-prong tok chak vajra, miraculously formed by the action of lightning on a deposit of metal in the ground, in some place of powerful practice in the Himalayas. Ngak’chang Rinpoche suggested I keep it in the gom-tag ‘to strengthen the meditation’. Stabilising the Four Naljors (naljor-zhi), the meditation series of Dzogchen Sem-dé, calls for extensive sitting practice, especially in retreat conditions. Most….people therefore who engage in Trek-chod, the three Dé of Dzogchen, may need to rotate between two or three different meditation postures during an hour’s session…..The methods of men-ngag-dé are extremely simple and direct. They could easily be misunderstood. The four chög-zhag are a skeletal frame clothed by many sem’dzin – the methods of men-ngag-dé. These methods are secret, not because they are dangerous – but because the power of transmission would be jeopardised if they were given to people who could not comprehend them.”….http://aroencyclopaedia.org…(See: Aro “controversy” F.A.Q……http://approachingaro.org/aro-controversy-faq)

One argument in favor of a possible Persian origin for the fotowwa (fotowwa…fotūwa) brotherhoods) consists of the initiation ritual surrounding the admission of new members, which always includes the binding on (šadd) of a belt, twisted thrice around the waist of a new initiate to represent the three stages of religious knowledge and practice known as šariʿat, ṭariqat, and ḥaqiqat (Taeschner, 1979, p. 495; Massignon, “Shadd”). The šadd bears a clear resemblance to the kustig, the belt with which a Zoroastrian male is girded on reaching the age of fifteen as a sign of maturity. It, too, is twisted around the waist three times, to signify the three cardinal principles of “Good Speech, Good Thoughts and Good Acts” (Dhabhar, ed., chap. 46). It should, however, be noted that there is a difference between the two practices, the former denoting initiation and the latter being a rite of passage, and that the Zoroastrian kustīg is meant to demarcate the noble from the ignoble parts of the body, an element lacking in the šadd of the fotowwa. It is also noteworthy that Salmān Fārsi (Ar. Fāresi) is generally regarded as having been entrusted with the šadd of the Prophet’s Companions (Massignon, 1963, tr. Unvala, p. 20), which might further support the thesis of an exclusively Persian origin for fotowwa. As pointed out above, however, fotowwa had not taken on institutional form in the time of the Prophet, apart from which many roles have been posthumously attributed to Salmān Fārsi in the complete absence of historical evidence.”.. Javanmardi, also known as futuwwah, see Ibn al-Husayn al-Sulami, 1991. The Way of Sufi Chivalry, Inner Traditions, Rochester. 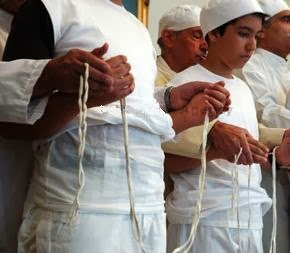 Sacred Kushti (Thread) and Sudreh (Shirt)…..Navjote ceremony - The priest guides the child in the tying of the Kushti….The ceremony is traditionally the first time a Zoroastrian wears the sedreh undershirt and kushti belt, which they then continue to wear for the rest of their life. ….Kushti (also: Kusti, Koshti) is the sacred girdle worn by Zoroastrians around their waists. Along with the Sedreh, the Kushti is part of the ritual dress of the Zoroastrians.....The Kushti is worn wound three times around the waist. It is tied twice in a double knot in the front and back, the ends of the Kushti hanging on the back. The Kushti is made of 72 fine, white and woollen threads, which represent the 72 chapters of the Yasna, the primary liturgical collection of texts of the Avesta.....The ritual of untying and tying the Kushti is performed several times a day and is called Nirang-i Kushti. During this ritual, the individual must remain standing in one spot, and may not speak to anyone. If the individual speaks, the ritual must be recommenced. 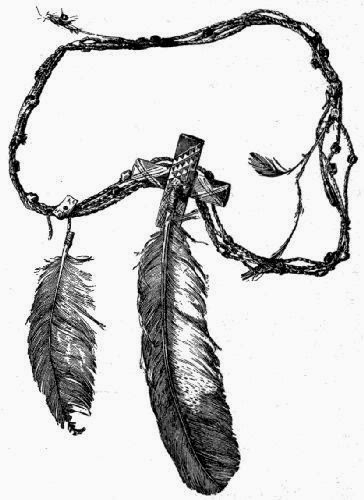 “The Izze-kloth or Medicine cord is a sacred cord worn by Apache medicine men that is believed to confer strength and special powers of healing to the wearer. The izze-kloth is usually made from strands of animal hide and its length punctuated with beads and shells. Often, an izze-kloth has four strands, each dyed a different color (usually, yellow, blue, white and black)….The izze-kloth holds great sacred symbolism and people regarded as unbelievers in the cord are almost never permitted to view, touch or discuss it….Nineteenth-century ethnological reports on Native American beliefs often commented on the difficulty in understanding the purpose and use of the izze-kloth because "the Apache look upon these cords as so sacred that strangers are not allowed to see them, much less handle them or talk about them."

“Upanayana is the initiation ritual by which initiates are invested with a sacred thread, to symbolize the transference of spiritual knowledge…..In Hinduism, a Yajñopavītam (Sanskrit: यज्ञोपवीतम्, yajñopavītam) is a thin consecrated cord, composed of distinct cotton strands, worn to symbolize the permission given to him to do Sandhyavandanam and Gayatri Mantra. The sacred Yajñopavītam is known by many names (varying by region and community), such as Bratabandha, Janivaara, Jandhyam, Poita, Pūņūl பூணூல், Janeu, Lagun, Yajnopavita, Yagyopavit, Yonya and Zunnar. The other Sanskrit term for it is Avyanga…... The construction of this cord is no doubt simple, but it must be borne in mind that the Yajñopavītam when formed is of no use unless blessed by Brahmans and consecrated by the recitation of Vedic texts ..."”… Sir Monier Monier-Williams, Brāhmanism and Hindūism,hinduism, hinduism or, Religious thought and life in India: as based on the Veda and other sacred books of the Hindūs, J. Murray, 1891, ".. 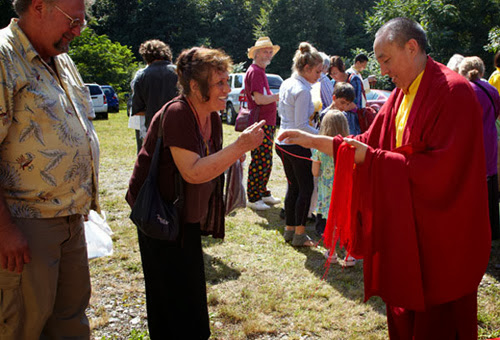 “At a recent talk by the Dalai Lama, I received a red cord tied around my neck. I also learned that in Tibetan Buddhism, one offers a white scarf to a lama, who then places it around your neck. What is the significance of these objects, and how should they be used?…. The red string is called a "protection and blessing cord." Traditionally, a lama ties a knot in the cord, then prays over it and blows the power of his mantra into it. Then he places it around one's neck as a blessing. When I first asked my own lama, the Venerable Kalu Rinpoche, about this, in 1973, he told me the cord is symbolic of remaining within the protection of his compassionate embrace even after departing from his physical presence. Other lamas have told me they take the protection cords off only to have dental work or surgery, and then put them on again afterward, as the strong protection field might impede the medical procedure.”…http://www.beliefnet.com/Faiths/Buddhism/2001/03/Blessings-And-Offerings.aspx

“The commentaries explain that this wind rolls itself up (they use a character with the radical “silk“ [liao] meaning “to wrap up with a strap") and, by so tuming …”…..Taoist Meditation: The Mao-shan Tradition of Great Purity………Isabelle Robinet - 1993