Emperor Wu of Han and Legendary Daxia (126 BC)

Ancient Balkh was not only legendary in Tibet and Greece….The great city was also legendary in Ancient China….Zhang Qian probably witnessed the last period of the Greco-Bactrian Kingdom in the 2nd C BC…….

"The name Daxia appears in Chinese from the 3rd century BCE to designate a mythical kingdom to the West, possibly a consequence of the first contacts with the expansion of the Greco-Bactrian Kingdom, and then is used by the explorer Zhang Qian in 126 BCE to designate Bactria."

"The reports of Zhang Qian were put in writing in Shiji ("Records of the Great Historian") by Sima Qian in the 1st century BCE. They describe an important urban civilization of about one million people, living in walled cities under small city kings or magistrates. Daxia was an affluent country with rich markets, trading in an incredible variety of objects, coming as far as Southern China. By the time Zhang Qian visited Daxia, there were no longer a major king, and the Bactrian were suzerains to the nomadic Yuezhi, who were settled to the north of their territory beyond the Oxus. Overall, Zhang Qian depicted a rather sophisticated but demoralized people who were afraid of war." 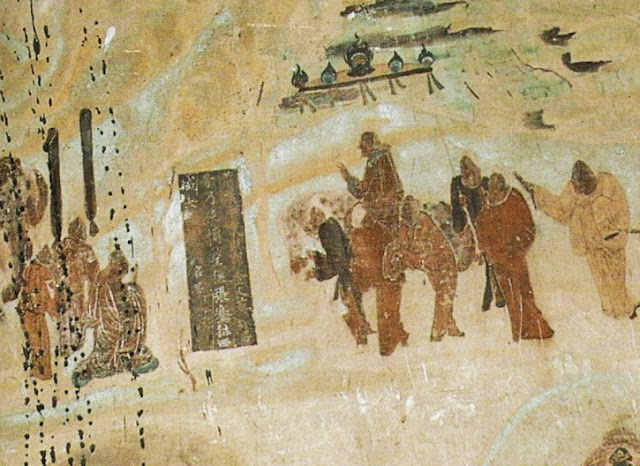 "Following these reports, the Chinese emperor Wudi was informed of the level of sophistication of the urban civilizations of Ferghana, Bactria and Parthia, and became interested in developing commercial relationships with them: "Thus the emperor learned of Dayuan, Daxia, Anxi, and the others, all states rich in unusual products whose people cultivated the land and made their living in much the same way as the Chinese. All these states, he was told, were militarily weak and prized Han goods and wealth." Shiji 123.…..These contacts immediately led to the dispatch of multiple embassies from the Chinese, initiating the development of the Silk Road."

"Dayuan (Ta-yuan; Chinese: 大宛; pinyin: Dàyuān; Wade–Giles: Ta-yuan; literally "Great Yuan") was a country in Ferghana valley in Central Asia, described in the Chinese historical works of Records of the Grand Historian and the Book of Han. It is mentioned in the accounts of the famous Chinese explorer Zhang Qian in 130 BCE and the numerous embassies that followed him into Central Asia. The country of Dayuan is generally accepted as relating to the Ferghana Valley…..These Chinese accounts describe the Dayuan as urbanized dwellers with Caucasian features, living in walled cities and having "customs identical to those of the Greco-Bactrians", a Hellenistic kingdom that was ruling Bactria at that time in today’s northern Afghanistan. The Dayuan are also described as manufacturers and great lovers of wine.[1] The Dayuan were probably the descendants of the Greek colonists that were settled by Alexander the Great in Ferghana in 329 BCE, and prospered within the Hellenistic realm of the Seleucids and Greco-Bactrians, until they were isolated by the migrations of the Yuezhi around 160 BCE. "…..Watson, Burton(1993). Records of the Grand Historian by Sima Qian. Translated by Burton Watson. Han Dynasty II (Revised Edition), pp. 244-245. Columbia University Press 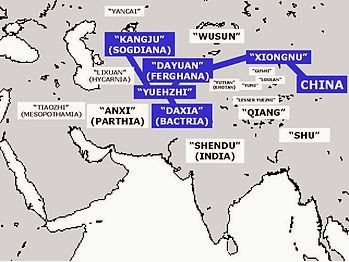 "Zhang Qian (Chang Chien; pinyin : Zhāng Qiān; simplified Chinese: 张骞; traditional Chinese: 張騫) was an imperial envoy to the world outside of China in the 2nd century BCE, during the time of the Han Dynasty. He was the first official diplomat to bring back reliable information about Central Asia to the Chinese imperial court, then under Emperor Wu of Han, and played an important pioneering role in the Chinese colonization and conquest of the region now known as Xinjiang. Today Zhang Qian's travels are associated with the major route of transcontinental trade, the Silk Road. In essence, his missions opened up to China the many kingdoms and products of a part of the world then unknown to the Chinese. Zhang Qian's accounts of his explorations of Central Asia are detailed in the Early Han historical chronicles, Records of the Grand Historian or Shiji, compiled by Sima Qian in the 1st century BCE . Today Zhang Qian is considered a national hero and revered for the key role he played in opening China to the world of commercial trade."

"Daxia (Bactria)……Zhang Qian probably witnessed the last period of the Greco-Bactrian Kingdom, as it was being subjugated by the nomadic Yuezhi. Only small powerless chiefs remained, who were apparently vassals to the Yuezhi horde. Their civilization was urban, almost identical to the civilizations of Anxi and Dayuan, and the population was numerous. "Daxia is situated over 2,000 li (1,000 kilometers) southwest of Dayuan (Ferghana), south of the Gui (Oxus) river. Its people cultivate the land, and have cities and houses. Their customs are like those of Dayuan. It has no great ruler but only a number of petty chiefs ruling the various cities. The people are poor in the use of arms and afraid of battle, but they are clever at commerce. After the Great Yuezhi moved west and attacked and conquered Daxia, the entire country came under their sway. The population of the country is large, numbering some 1,000,000 or more persons. The capital is Lanshi (Bactra) where all sorts of goods are bought and sold." (Shiji, 123, Zhang Qian quote, translation Burton Watson).

"The Kushan Empire (Bactrian: κυϸανο; Sanskrit: कुषाण राजवंश Kuṣāṇ Rājavaṃśa; BHS: Guṣāṇa-vaṃśa; Parthian: Kušan-xšaθr) was an empire in South Asia originally formed in the early 1st century CE under Kujula Kadphises in the territories of ancient Bactria around the Oxus River (Amu Darya), and later based near Kabul, Afghanistan. The Kushans spread from the Kabul River Valley to defeat other Central Asian tribes that had previously conquered parts of the northern central Iranian Plateau once ruled by the Parthians, and reached their peak under the Buddhist emperor Kanishka (127–151), whose realm stretched from Turfan in the Tarim Basin to Pataliputra on the Gangetic Plain."…..The Dynastic Arts of the Kushans by John M. Rosenfield

CHANG-CHIEN…..c.172 - 114 BC……"Chang-Ch'ien (or Zhang Qian) was dispatched by the emperor Wu-ti to establish relations with a Central Asian tribal group that spoke an Indo-European language……Almost 1400 years before Marco Polo Chang-Chien travelled as far west as Samarkand and Usbekistan. On a second trip he visited Bactria and Sogidiana in Parthia……His travel report stimulated Chinese trade relations along the silk-road with the West, and led to the introduction into China of a superior breed of horses and new plants, such as grapes and alfafa."

Daxia or Ta-hsia ….. "the name given in antiquity by the Chinese to the territory of Bactria..….An ancient country of southwest Asia. It was an eastern province of the Persian Empire before its conquest by the Greeks in 328 b.c. The kingdom was destroyed c. 130 b.c. by nomadic tribes……an ancient country of SW Asia, between the Hindu Kush mountains and the Oxus River: forms the present Balkh region in N Afghanistan."

Daxia, Ta-Hsia, or Ta-Hia (Chinese: 大夏; Pinyin: Dàxià) is the name given in antiquity by the Han Chinese to the territory of Bactria……."The name Daxia appears in Chinese from the 3rd century BCE to designate a mythical kingdom to the West, possibly a consequence of the first contacts with the expansion of the Greco-Bactrian Kingdom, and then is used by the explorer Zhang Qian in 126 BCE to designate Bactria……In the chapter VIII of the Guanzi, Xiao Kuang, it is written: "In the west [Duke Huan]... having passed through the valleys of the Taihang and Bier, took captive the chief of the Da Xia. Further to the west, he subjugated the Xi Yu of Liusha, and for the first time the Rong People of Qin were obedient."

"Emperor Wu of Han, also translated Han Wudi, (simplified Chinese: 汉武帝; traditional Chinese: 漢武帝; pinyin: Hàn Wǔdì; Wade–Giles: Han Wu-ti, 156 – 87 BC), born Liu Che (劉徹), was the seventh emperor of the Han Dynasty of China, ruling from 141 to 87 BC…….Emperor Wu successfully repelled the nomadic Xiongnu from systematically raiding northern China and dispatched his envoy Zhang Qian in 139 BC to seek an alliance with the Yuezhi of modern Uzbekistan. This resulted in further missions to Central Asia. Although historical records do not describe him to be aware of Buddhism, emphasizing rather his interest in shamanism, nevertheless cultural exchanges occurred as a consequence of these embassies, and there are suggestions that these included his reception of Buddhist statues from central Asia, as depicted in the Mogao Caves murals."

"Chengdu is also known for its handicrafts. From the Warring States (770 BC-476 BC) to the Han Dynasty (206 BC-AD 220), lacquer wares enjoyed a high popularity abroad. Hometown of the famous Shu brocade, Chengdu has been an important city for brocade weaving and the silk culture in China. In the Han Dynasty (220 BC- AD 206) and the Jin Dynasty (265-420), the colored silk from Sichuan was extremely popular in China. For a long period of time between the Six Kingdms and the Tang Dynasty (618-907), most of the silks exported to the Middle Asia were made in Chengdu. In 1909, the Shu colored silk won the first prize in the Southeast Asian Fair. In the Han Dynasty, the hemp cloth was the first-grade cloth, finding a ready market in countries as far as Afghanistan (known then as Daxia)."

"More than 2,000 years ago, people in the southwest of China had traded between Chengdu, China with India. The trade route, about 2,000 kilometers (1,243 miles) long, well-known for its silk trade, was dubbed the 'Southern Silk Road' by historians. Similar to the Silk Road, the Southern Silk Road contributed much to the cultural change between China and the West. Zhang Qian, an important explorer in the Han Dynasty, opened up the historically important Silk Road during the reign of Han Emperor Wudi (141BC–87BC). When he set out on his first journey to the Western Regions, he found bamboo staffs of Qiongshan (Yingjing County of Sichuan Province) and delaines of Sichuan Province in Daxia (Balkh) in 128 BC. Merchants told him that these goods were bought from Juandu (now India); therefore, Zhang Qian guessed that there was a trade road between Sichuan Province and India."