…'basic law'….."The natural law and order of this world is not “for” or “against.” Fundamentally, there is nothing that either threatens us or promotes our point of view. The four seasons occur free from anyone’s demand or vote. Hope and fear cannot alter the seasons. There is day; there is night. There is darkness at night and light during the day, and no one has to turn a switch on and off. There is a natural law and order that allows us to survive and that is basically good, good in that it is there and it works and it is efficient…..We often take for granted this basic law and order in the universe, but we should think twice. We should appreciate what we have. Without it, we would be in a total predicament. If we didn’t have sunlight, we wouldn’t have any vegetation, we wouldn’t have any crops, and we couldn’t cook a meal. So basic goodness is good because it is so basic, so fundamental. It is natural and it works, and therefore it is good, rather than begin good as opposed to bad."….Basic goodness & the genuine heart of sadness – Chögyam Trungpa

'Ancient Khotanese scrolls'….."Stein's greatest discovery was made at the Mogao Caves also known as "Caves of the Thousand Buddhas", near Dunhuang in 1907. It was there that he discovered the Diamond Sutra, the world's oldest printed text which has a date (corresponding to AD 868), along with 40,000 other scrolls….After the Tang Dynasty, Khotan formed an alliance with the rulers of Dunhuang."

…."ancient scrolls found in afghanistan"…(???).."Historically speaking, Dzogchen appears to have originated somewhere in Central Asia outside of both India and Tibet as Upadesha (man-ngag), or secret oral instructions, communicated privately from a realized master to a disciple. At least, that is the Tibetan tradition. In the Buddhist tradition, this mysterious region was designated as Uddiyana (Orgyan), which appears to be identifiable as Eastern Afghanistan before the Muslim era."……..Oral Tradition from Zhang-Zhung: An Introduction to the Bonpo Dzogchen Teachings of the Oral Tradition from Zhang-Zhung ~ John Myrdhin Reynolds

Great King of Bon…."The Bon tradition holds that the early kings of Tibet were adherents of Bon who gave their royal patronage to the religion and contributed to its propagation far and wide in the kingdom……The introduction of Buddhism into Tibet is interpreted as a catastrophe that caused the suppression of Bon leading to the ‘setting of the sun of the doctrine’….. "A Beginner’s Guide to the Bon Religion of Tibet by Tsering Dhundup….Tsering Dhundup, teaches English at an International Community School in London, but teaches Tibetan language at the Tibet House Trust at the weekends. He is a Buddhist and hails from the predominantly Bon area of Shar khog in eastern Tibet.

"…Bo refers to the Bo Murgel, who practice in the lands around Lake Baikal, Siberia and Mongolia. Bon refers to the teachings of Buddha Tonpa Shenrab, who came out of Zhang Zhung to Tibet around 18,000 years ago, according to the head teacher of today's Bonpo practioners. The author does prove his point, I believe, that these two cultures have common origins….comparing the ancient Bön religion with the Siberian shamanic tradition of Lake Baikal. …. the author draws on his many years of experience in both Yungdrung Bön and the Bө Murgel tradition of Buryatia to bring this subject to life and help us unlock some hidden aspects of both " ….Bo Bon: Ancient Shamanic Traditions of Siberia and Tibet in Their Relation to the Teachings of a Cen….by Dmitry Ermakov

'Lord of Taksik'….Taksik …stag gzigs…ta zig…sTag gzigs….(Trom Gesar)….."Much has been written on the identification of Trom (khrom or phrom). Geographically, it seems to refer to the Central Asian lands west of Tibet whose inroads into Tibet were via the Silk Route. Culturally, it seems to refer to the Greek or Persian culture that had permeated so far east by the eighth century. It can be no coincidence that the Galenos from Trom named above bore the same name as the celebrated Greek physician who graced the Roman courts in the second century b.c.e. Because of this, Beckwith identifies Trom with Rome. Desi Sangé Gyatso and others equate Trom with Taksik (stag gzigs, ta zig), which is tempting to identify with Tajikistan. However, the Five Chronicles, cited by Jampa Trinlé, disputes the identity of Trom with Taksik, stating that Taksik is in the west and Trom in the north. Trinlé goes on to say that some commentators place Taksik to the west of Xinjiang and north of Afghanistan, and that the Bön tradition speaks of regions called Taksik Trom and Taksik Olmo Lungring…… Pawo Tsuklak Trengwa talks of the “Hor (Mongolians) similar to the barbarian Taksik or Turks.” It may be that there is an overlap between Trom and the ancient land of Shangshung, from whence came the Bön practices. "….Mirror of Beryl: A Historical Introduction to Tibetan Medicine…. by Desi Sangye Gyatso (Author) , Gavin Kilty (Translator) 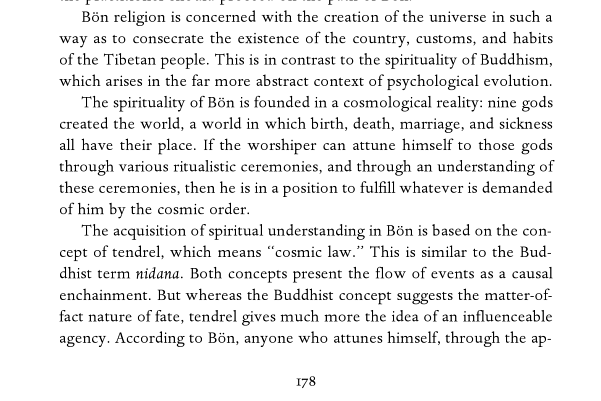 'Creation of the universe….in contrast to the spirituality of Buddhism'….cultural evolution and psychological evolution….

"Shiwa Okar is featured in a work composed by the influential Tibetan Buddhist lama Chögyam Trungpa, particularly a long verse epic composed in Tibet called The Golden Dot: The Epic of the Lha, the Annals of the Kingdom of Shambhala, and in terma he revealed beginning in 1976. The Golden Dot was lost in Trungpa Rinpoche's flight from Tibet in 1959. As Robin Kornman, a Buddhist scholar and student of his, explained:
“ Trungpa Rinpoche began to reconstruct the original text after escaping Tibet, and it is this later work to which we refer. The first chapter describes the creation of the world by nine cosmic gods (shrid pa 'i lha) who appear in the form of native Tibetan deities known as drala (dgra bla), or war gods. These gods represent primal or originary aspects of the phenomenal world. For example, one of these lha stood for all kinds of light. Glancing in many directions, this diety created all of the lights existing in the world, including the sun, the moon, the light of the planets and stars, and the inward luminosity of consciousness itself. Another represented space and the sense of direction ... In Trungpa Rinpoche's epic these were directed by a ninth lha called Shiwa Okar ... a sort of absolute principle behind creation and the nature of reality. After these nine cosmic deities have created the world, [Shiwa Okar] goes to the things they have created and invests each one with an animistic spirit, a drala….."…."The Influence of the Epic of King Gesar of Ling on Chogyam Trungpa" by Robin Kornman. in Recalling Chogyam Trungpa, ed. Midal. Shambhala Publications, 2005. ISBN 1-59030-207-9 pg. 363-364

"Buddhism is normally thought of as a nontheistic tradition, and this raises the question of how such spirits, gods, and deities are to be understood within the Tibetan Buddhist framework. Certainly in Tibetan life, whether it is a question of the malevolent mamos, the potentially beneficent hearth god, the deities of the god realms, or the dharma protectors or tantric yidams, the nonhuman beings are understood at least on one level as more or less independent, objective entities. They are beings with whom one must be in constant relation, even though they are nonhuman and usually not visible…..At the same time, however, from the point of view of the philosophical and meditative tradition, all such nonhuman beings are ultimately seen as aspects of one’s own mind and not separate from it. But what does this actually mean? Frequently, particularly in the West, this standard Buddhist assertion is taken to indicate that such spirits and deities, taken as external beings by ordinary Tibetans, are not really external at all; that in fact they are mistaken projections of psychological states. This, then, becomes a justification for treating them as nonexistent and provides a rationale for jettisoning them from Western adaptations of the tradition. The problem with this approach is that it reflects a misunderstanding of what is meant by the statement that such entities are aspects of mind and inseparable from mind….. here is the really critical point: it is not only the beings of the unseen world that have this status, but all of the phenomena of duality. In the Tibetan view, ourselves, other people, trees, mountains and clouds—indeed all of the phenomena of the entire so-called internal and external universe—are nothing other than false objectifications and solidifications of nondual awareness."….On the Importance of Relating to Unseen Beings By Reginald A. Ray

Tendrel…..cosmic law…nidana…."The Tibetan word tendrel (rten ‘brel) is an abbreviation of the term ten-ching drelwar jungwa (rten cing ‘brel bar ‘byung ba). It is a translation of the Sanskrit term pratitya-samutpada, which has been variously translated as “dependent arising, dependent co-origination, interdependence, relativity, auspicious coincidence,” and so on. ."….http://nalandatranslation.org/offerings/choosing-the-right-word/dependent-arising-tendrel/